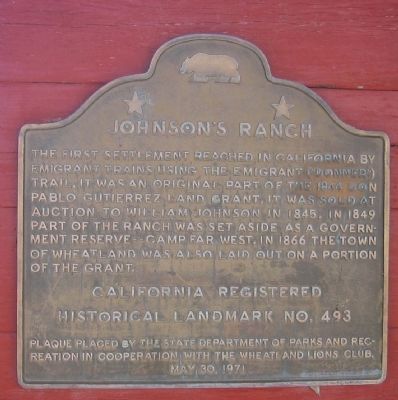 By Syd Whittle, February 15, 2006
1. Johnson's Ranch Marker
Inscription.
Johnson's Ranch. . The first settlement reached in California by emigrant trains using the Emigrant (“Donner”) Trail. It was an original part of the 1844 Don Pablo Gutierrez Land Grant. It was sold at auction to William Johnson in 1854. In 1849 part of the ranch was set aside as a government reserve -- Camp Far West. In 1866 the town of Wheatland was also laid out on a portion of the grant. . This historical marker was erected in 1971 by State Department of Parks and Recreation in cooperation with the Wheatland Lions Club (May 30, 1971). It is in Wheatland in Yuba County California

The first settlement reached in California by emigrant trains using the Emigrant (“Donner”) Trail. It was an original part of the 1844 Don Pablo Gutierrez Land Grant. It was sold at auction to William Johnson in 1854. In 1849 part of the ranch was set aside as a government reserve -- Camp Far West. In 1866 the town of Wheatland was also laid out on a portion of the grant.

Erected 1971 by State Department of Parks and Recreation in cooperation with the Wheatland Lions Club (May 30, 1971). (Marker Number 493.)

Location. 39° 0.618′ N, 121° 25.375′ W. Marker is in Wheatland, California, in Yuba County. Marker is on Front Street, on the right when traveling south. Marker is located at Tomita Park, between Fourth and Main Streets. Touch for map. Marker is in this post office area: Wheatland CA 95692, United States of America. Touch for directions.

Other nearby markers. At least 8 other markers are within 7 miles of this marker, measured as the crow flies. Holland House (about 500 feet away, measured in a direct line); Durst Hop Ranch 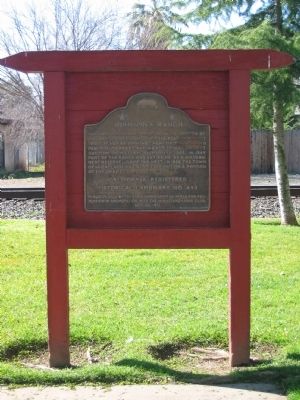 More about this marker. This site is a California Registered Historical Landmark (No. 493).

Also see . . .
1. Wheatland High School Hometown. The history of Wheatland is provided by the students of the local high school. (Submitted on August 20, 2008.)

2. An 1849 Map of Johnson's Ranch and the Wheatland Area. The Wheatland Historical Society website offers this map and links to additional maps and information. (Submitted on February 27, 2011.)

3. Johnson's Ranch. An article written by Tom Barry for the E Clampus Vitus publication Hewgag Monitor in 1995. Perhaps the most important thing for which the Johnson Ranch is remembered is that it was there that the five women and two men survivors of the “Forlorn Hope” group from the snowed-in Donner Party arrived (after 33 grueling days which saw 7 of their number die) on Jan. 17, 1847, seeking aid for the remainder of their ill-fated wagon train. (Submitted on March 14, 2011.) 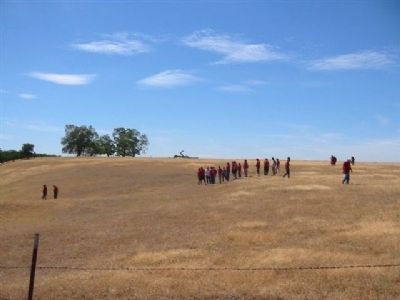 
Additional comments.
1. Johnson Ranch Marker at the Actual Site
We were on a wagon train 15 yrs ago give or take. We started at Rough and Ready went through Penn Valley through Beale AFB to Johnson Ranch. We spent the night there by a big log (the mountain men killed a rattler and cooked it but the children were protesting the killing. I'll never forget that). I was walking around and found a dirt road next to the walnut orchard (probably east of the Camp Far West Road across from the pasture we were camped in) and ran across a marker. It had something to do with the Donner Party and Johnson Ranch and that is my first knowledge that the Donner Party arrived their after their ordeal. I had read the book earlier so I was acquainted with the Johnson Ranch. Regretfully I didn't get a picture of it nor of the wagon train. Just memories and a few names of the teamsters and outriders. Most of them are gone now or moved.

Just my two cents worth,
Thanks for listening....joyce
Editors Note: Thank you for this personal memory!
— Submitted August 18, 2013, by Joyce Patterson of Oregon House, California.

Topics. This marker is included in these topic lists: Notable Places 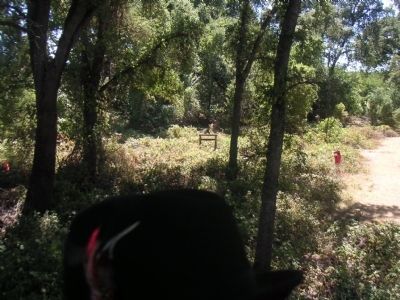 By Lester J Letson, July 20, 2007
4. Johnson's Ranch Well
The well has been restored and is visible in a grove of trees Southwest of where it is believed the stables once stood.
• Settlements & Settlers 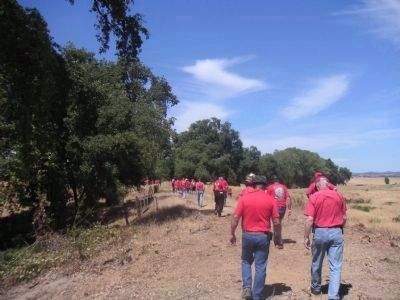 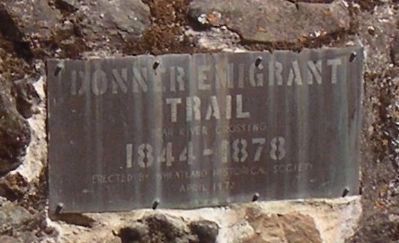 By Lester J Letson
6. Donner Emigrant Trail Marker
Close up of the simple marker erected near the Johnson Ranch. The Truckee River Route of the California Trail (over what would be known later as Donner Pass) traveled down the Bear River, and Johnson’s Ranch was the first inhabited area the early emigrants would come to in California. This plaque is located near the Johnson's Ranch well. 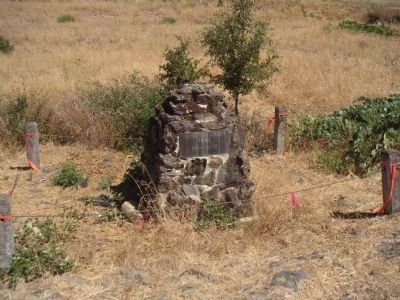