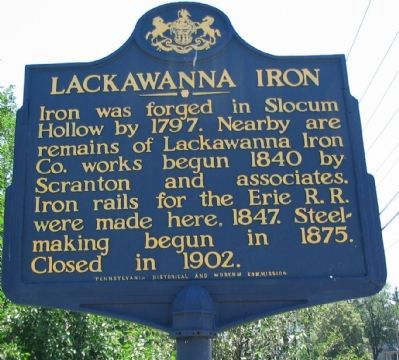 By Craig Swain, July 25, 2008
1. Lackawanna Iron Marker
Inscription.
Lackawanna Iron. . Iron was forged in Slocum Hollow by 1797. Nearby are remains of Lackawanna Iron Co. works begun 1840 by Scranton and associates. Iron rails for the Erie R.R. were made here, 1847. Steel-making begun in 1875. Closed in 1902. . This historical marker was erected in 1947 by Pennsylvania Historical and Museum Commission. It is in Scranton in Lackawanna County Pennsylvania

Location. 41° 24.214′ N, 75° 39.827′ W. Marker is in Scranton, Pennsylvania, in Lackawanna County. Marker is at the intersection of Cedar Avenue and Mattes Avenue, on the right when traveling north on Cedar Avenue. Located at the Scranton Iron Furnace Park. Touch for map. Marker is in this post office area: Scranton PA 18505, United States of America. Touch for directions. 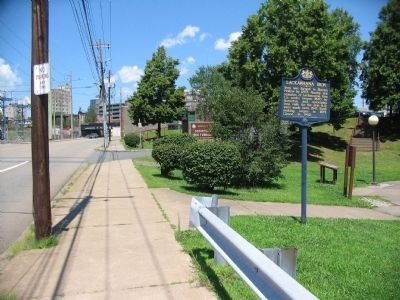 Also see . . .
1. Scranton Iron Furnaces. A page from the Anthracite Museum detailing the furnace. Includes some photos of the furnace when configured for operation. (Submitted on August 20, 2008, by Craig Swain of Leesburg, Virginia.) 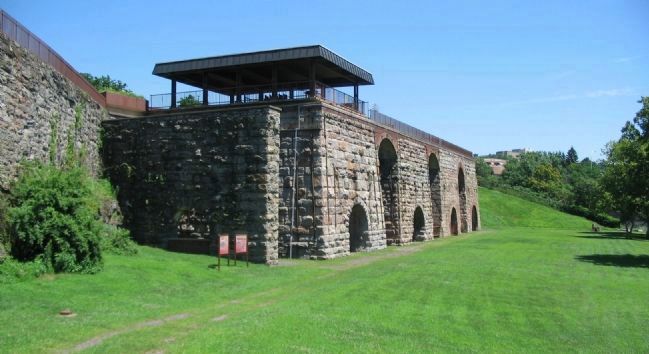 By Craig Swain, July 25, 2008
3. The Iron Furnace
Three furnaces were linked together in order to share equipment. These furnaces used a hot blast system to smelt the iron.
More. Search the internet for Lackawanna Iron.