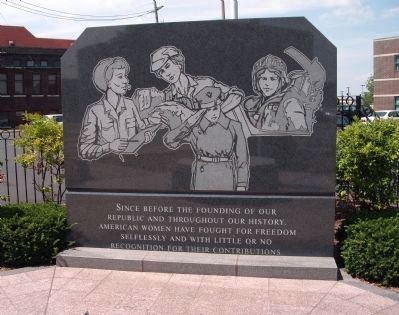 Photographed By Al Wolf, August 20, 2008
1. Women's War Memorial Marker
Inscription.
Women's War Memorial. . Since before the founding of our Republic and throughout our history, American women have fought for freedom selflessly and with little or no recognition for their contributions. . This memorial was erected in 1995. It is in Danville in Vermilion County Illinois

Since before the founding of our Republic and throughout our history, American women have fought for freedom selflessly and with little or no recognition for their contributions.

Topics. This historical marker and memorial is listed in these topic lists: Heroes • Military • Women.

Location. 40° 7.753′ N, 87° 37.731′ W. Marker is in Danville, Illinois, in Vermilion County. Marker is at the intersection of North Hazel Street and East Madison Street on North Hazel Street. On the North/East corner of Hazel and Madison streets. Can park in the Vermilion County War Museum's parking lot. The War Museum is located to the West. Touch for map. Marker is at or near this postal address: 307 N Vermillon Street, Danville IL 61832, United States of America. Touch for directions. 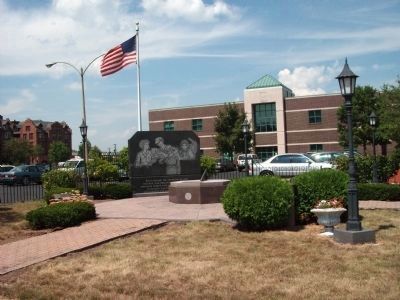 Photographed By Al Wolf, August 20, 2008
2. Wide View of Marker and Sundial
The Vermilion County War Museum parking lot sits behind the Memorial and its Marker.

Regarding Women's War Memorial. The Vermilion County and City of Danville, Illinois community honors women whom have served in any of the United States Military Services.
The "Women's War Memorial" is behind the War Museum with the public parking lot between them for easy access. This web site gives a taste of the Museum contents. Both locations are well worth visiting by all ages. 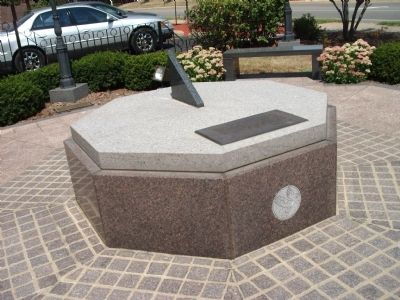 Photographed By Al Wolf, August 20, 2008
4. Sun Dial Plaque
What is time? The shadow on the dial, the striking of the clock, the running of the sand, day and night, summer and winter, months, years, centuries—these are but arbitrary and outward signs, the measure of time, not time itself. Time is the Life of the Soul.
Longfellow
Credits. This page was last revised on December 31, 2020. It was originally submitted on August 21, 2008, by Al Wolf of Veedersburg, Indiana. This page has been viewed 1,752 times since then and 58 times this year. Photos:   1, 2, 3, 4. submitted on August 21, 2008, by Al Wolf of Veedersburg, Indiana. • Kevin W. was the editor who published this page.
Share this page.