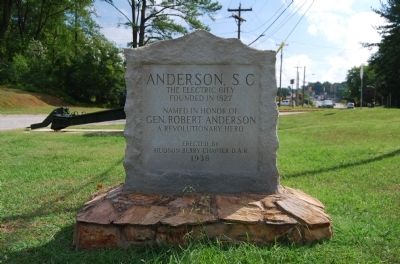 Named in Honor of
Gen. Robert Anderson
A Revolutionary Hero

Topics and series. This historical marker is listed in these topic lists: Patriots & Patriotism • Settlements & Settlers • War, US Revolutionary. In addition, it is included in the Daughters of the American Revolution (DAR) series list. A significant historical year for this entry is 1827. 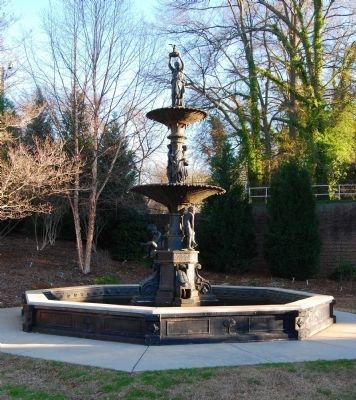 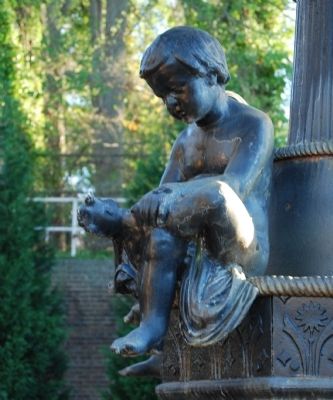 Robert Anderson married Ann Thompson November 6, 1765, and shortly thereafter removed to South Carolina and settled to what was known afterwards as Pendleton District. He was an officer in the Revolutionary War and rose from Colonel to Brigadier General and is now known as General Robert Anderson. He especially distinguished himself for his brave and valiant service at the Battle of Eaton Springs and the Battle of Cowpens, fighting in the front line. Gen. McGrady, in his History of South Carolina, says: "The distinguishing feature of the Battle of Cowpens upon the American side, was undoubtedly the work of Pickens and his marksmen, who was mentioned here as Captain Anderson but later, 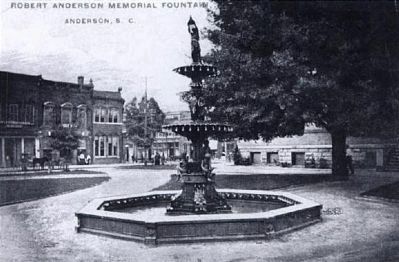 South Carolina Postcards, Vol. IX: Anderson County, by Howard Woody, circa 1908
4. Robert Anderson Memorial Fountain
The fountain was initially installed in a small landscaped area behind the courthouse. Then it was moved to Johnson Park in 1977. It was taken down and stored in 1993. In 2002 it was installed at the Anderson County Museum.
after the revolutionary war was over, was made Brigadier General for his valiant service.

Now we see General Anderson with General Pickens march against the Cherokee Indians on the northern frontier of what is now known as Oconee County. They were commissioned to make a treaty of Peace with them, which was signed under and oak tree on the East side of the Seneca River. After the war was over he settled on his Cherokee lands, on the Seneca River which were given him for his part in the war and peaceful settlement with the Cherokee Indians. A County was named after him, also the County Seat. It is said this treaty was never broken. He built an imposing home, having a frontage of sixty feet. Here he brought up his family. His wife had a love of the beautiful, for in is said there was a profusion of lovely roses and other flowers surrounding the house, which fronted on an eighty acre tract of beautiful maples, which led down to the Seneca River. There were thoroughbred horses in the stables, in care of old Cato, the loved coachman, and the home always abounded in gracious hospitality. 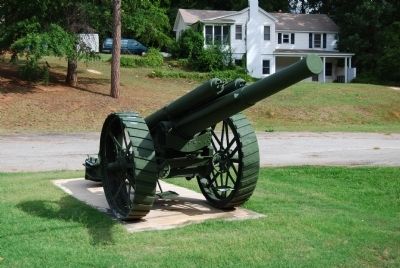 Photographed By Brian Scott, August 23, 2008
5. Nearby British 60-pounder Field Gun Mark II
Officially called M1918, this British made field gun was used by the United States Army during World War I. Brought home with the soldiers at the end of the war, many of these guns were given back to the British at the start of World War II as part of Lend-Lease.
Dr. Wm. Hunter. Robert Anderson II married Maria Thomas, daughter of General Thomas of England who fought against General Anderson in the Revolutionary War. After his wife died, he married twice again. He died in 1813 and his will was probated January 9 of the same year. This was an unusual document. In minute detail he provided for the welfare of his slaves, reciting his desire they should never be sold from the place. Then he closed with the words: "And now My Blessed Redeemer do I, with a lively faith, lay hold of they meritorious death and suffering, hoping to be washed clean by the precious blood from all my sins. In this hope I rest and wait my call." It was the intention to bury his body in the Cemetery at the Old Stone Church, but on account of the flood of the Seneca River at the time he was buried on his plantation. He left the bulk of his estate to his son, Robert Anderson II. I should mention here, General Anderson served in the House and Senate of South Carolina and later his son, Robert Anderson II was his successor, having died at Columbia while fulfilling his duties.

This sketch would not be complete without giving the romance of General Anderson and Ann Thompson, copied from The Anderson S.C. Daily Mail. The Daily Mail send the following interesting reminiscence concerning Robert Anderson, the Revolutionary War Hero: 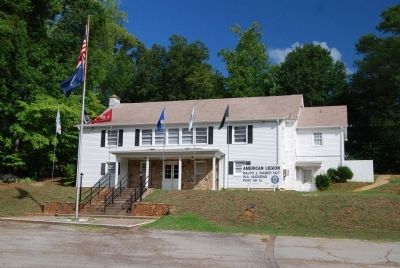 Photographed By Brian Scott, August 23, 2008
6. American Legion, Ralph J. Ramer Hut
W.A. Hudgens Post #14
Greenville Street
One of the oldest American Legion huts in Anderson, the Anderson S.C. stone marker is one of several that stand on the hut's grounds.
says that General Anderson came from Old Cambridge, where General Andrew Pickens made the first treaty with the Cherokee Indians, to survey the lands, leaving his sweetheart Ann Thompson behind. He stayed two years, during this time locating his home on the West bank of the Seneca River. The deliveries of mail there was few and far between, and not a word passed between them. She supposed the Indians had slain him and engaged herself to be married to another man. When General Anderson completed his survey, he started home to claim his bride. When about twenty miles from home, he stayed all night with a man who told him of the coming marriage on the morrow. Early the next morning he saddled his horse and went to see about it. There was an avenue from the road up to the house. Ann, with her bridesmaids was upstairs. Looking out of the window she saw him riding up and exclaimed "by my soul there comes Robert Anderson and I love his little finger more than the other man's whole body."

Grabbing a shawl, she ran down the stairs as swiftly as her feet could carry her, met her long absent lover half way down the avenue. A little talk followed and the General Anderson turned his horse, she mounted up behind him and the wedding was performed nearer the foot of the hills than it might have been has he stayed away a day longer.

Mention has already been made of the large 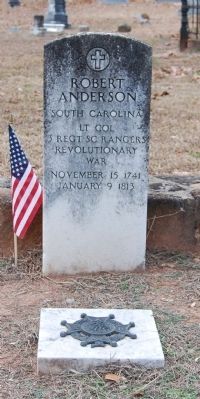 Photographed By Brian Scott, November 28, 2008
7. Gen. Robert Anderson Tombstone
Old Stone Church Cemetery, Pendleton, SC
South Carolina
Lt Col
3 Regt SC Rangers
Revolutionary
War
November 15 1741
January 9 1813
colonial home he built two hundred yards west of the Seneca River. Here, he and Ann Thompson reared their family and after her passing, Robert Anderson II married Maria Thomas and they too lived in the old home rearing their family and taking care of the large estate left by his father.
— Submitted January 13, 2009, by Brian Scott of Anderson, South Carolina.
2. General Robert Anderson Memorial Fountain
From the Anderson Downtown Historic District National Register nomination form: "This fountain was erected in 1906 as part of an overall beautification of the courthouse grounds, a project begun in 1905 by a women's group known as the Anderson Civil Association. Constructed of iron, the fountain was made by the Anderson Machine and Foundary Company. Sixteen feet in height, the topmost figure holds an urn from which water cascades into two basins and finally into a reflection pool."
— Submitted September 16, 2010, by Brian Scott of Anderson, South Carolina. 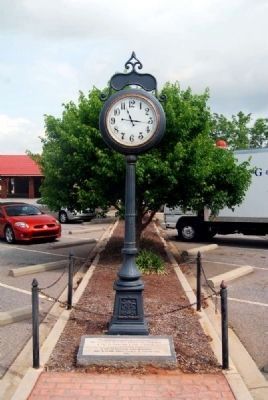