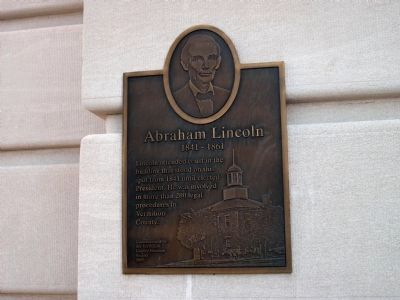 Lincoln attended court in the building that stood on this spot from 1841 until elected President. He was involved in more than 200 legal procedures in Vermilion County.

Topics and series. This historical marker is listed in this topic list: Government & Politics. In addition, it is included in the Former U.S. Presidents: #16 Abraham Lincoln series list. A significant historical year for this entry is 1841.

Location. 40° 7.495′ N, 87° 37.772′ W. Marker is in Danville, Illinois, in Vermilion County. Marker is at the intersection of Main Street and Vermilion Street on Main Street. Marker located on South/West Corner of the South wall of the County Court House exterior wall. Touch for map. Marker is in this post office area: Danville IL 61832, United States of America. Touch for directions. 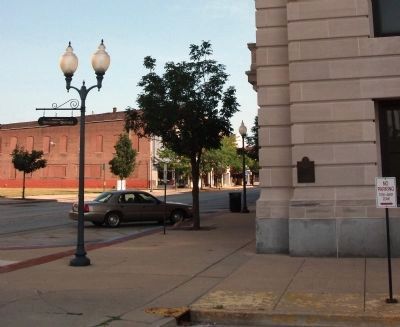 By Al Wolf, August 24, 2008
2. Wide View of Marker
Photo taken facing the North. The Marker can be seen on the corner of the current Vermilion County Court House structure.

Also see . . .  The Real Lincoln Highway: The Forgotten Lincoln Circuit Markers by Guy C. Fraker. The Vermilion County Court House is one of the fourteen Counties that Lincoln stopped at as a lawyer of the Eighth Judicial District Circuits between 1847 - 1859. This link has a map and history of the route that Abraham Lincoln took as he travelled this Circuit. For Lincoln students - and they that seek a better understanding of life in the 1860's - this is indeed a historical trip through the heart-land of America on the roads of Illinois. (Submitted on August 24, 2008, by Al Wolf of Veedersburg, Indiana.) 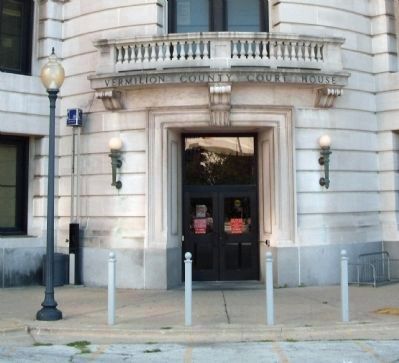 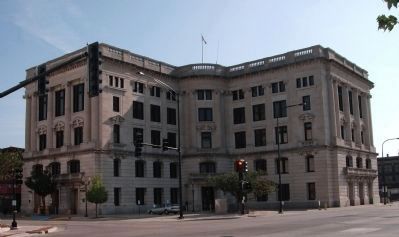 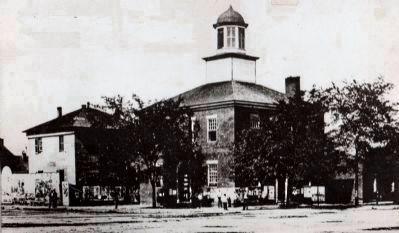 Courtesy - Vermilion County Illinois Museum
5. Vermilion County Courthouse and Jail - 1832 - 1872
Above is the Courthouse in which Lincoln tended to Court. "...The earliest known date that Lincoln came to Danville was on Monday, May 7, 1841. (In a letter to a friend by the name of W. H. Davidson, Lincoln wrote, '...Baker and I were with Webb at Vermilion.' ...Danville's first courthouse was a log cabin on the South side of W. Main Street just West of what is now 'Towne Center'. Construction of the second courthouse building (above photo) was begun in 1832 and it was opened for business in 1833. It was destroyed by fire in 1872."
(From: "Walking in Lincoln's Footsteps" by: Vermilion County Illinois Museum.) 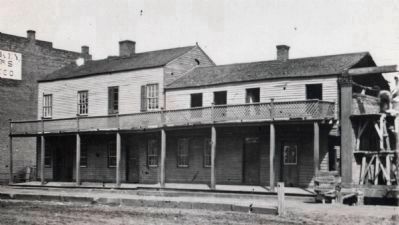 Courtesy - Vermilion County Illinois Museum
6. McCormack House Hotel - 1833 - 1875
"...Built in 1833 by Jesse Gilbert - wooden pins were used in its construction... ...was torn down in 1875. This hotel was where many of the lawyers, including Lincoln stayed when Circuit Court was in session." Located between Walnut and Franklin Streets on the North side of Main Street - just a short walk to the Courthouse.
(From: "Walking in Lincoln's Footsteps" by Vermilion County Illinois Museum)
Credits. This page was last revised on October 11, 2021. It was originally submitted on August 24, 2008, by Al Wolf of Veedersburg, Indiana. This page has been viewed 1,722 times since then and 42 times this year. Photos:   1, 2, 3, 4. submitted on August 24, 2008, by Al Wolf of Veedersburg, Indiana.   5, 6. submitted on November 6, 2008, by Al Wolf of Veedersburg, Indiana. • Kevin W. was the editor who published this page.
Share this page.