Pioneer in His Own Time 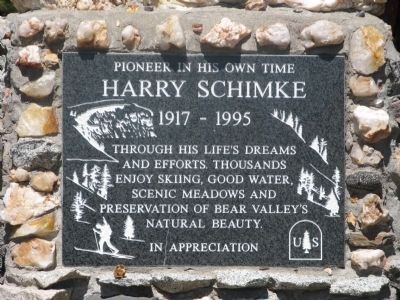 Topics. This historical marker is listed in these topic lists: Environment • Settlements & Settlers. 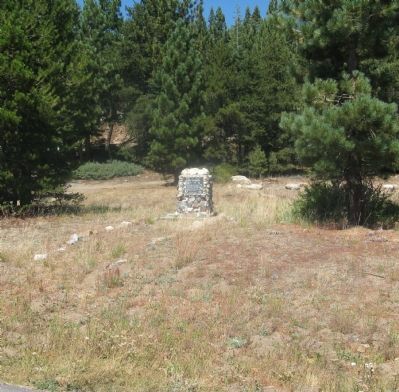 Click or scan to see
this page online
the depression as a summer fire lookout. After serving in World War II, he returned to the Stanislaus' Calaveras Ranger District. During his Calaveras years, he rose to the positions of Fire Control and Timber Management Officer.

Schimke was also instrumental in getting Bear Valley Ski Area on the map. Leaving the Calaveras District, he went to work for the Pacific Southwest Experiment Station. In that capacity, working out of Sonora, he became an early, dogged, and inspired researcher on fuels management: some call him the father of modern controlled burns. Though he lacked an academic degree in forestry, he has at least 10 scientific research publications to his credit. He also did important work in meadow restoration.

After his distinguished, 33-year career in the Forest Service, he became recreation director at Don Pedro Reservoir. In his spare time, he was a historian, writing on subjects with which he had a personal relationship, such as the history of Bear Valley. He had also collected materials for a history of the mysterious Monte Wolfe. Harry Schimke died at age 77 in 1995.