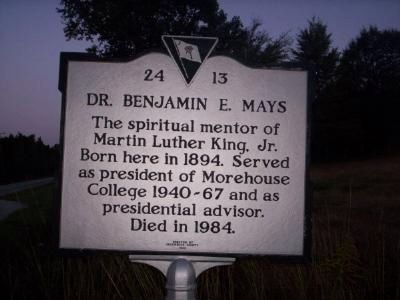 circa January 11, 2004
1. Dr. Benjamin E. Mays Marker
Inscription.
Dr. Benjamin E. Mays. . The spiritual mentor of Martin Luther King, Jr. Born here in 1894. Served as president of Morehouse College 1940-67 and as presidential advisor. Died in 1984. . This historical marker was erected in 1995 by Greenwood County. It is Near Epworth in Greenwood County South Carolina

The spiritual mentor of Martin Luther King, Jr. Born here in 1894. Served as president of Morehouse College 1940-67 and as presidential advisor. Died in 1984.

Topics and series. This historical marker is listed in these topic lists: African Americans • Education. In addition, it is included in the Historically Black Colleges and Universities 🎓, and the Martin Luther King, Jr. series lists. 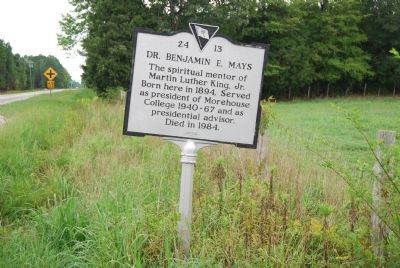 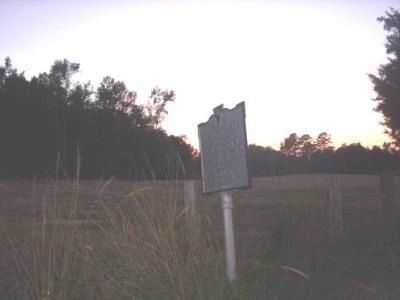 January 11, 2004
3. Dr. Benjamin E. Mays Marker
three years and graduated as class valedictorian in 1916. After one year at Virginia Union College, he went north first to Bates College in Maine and later to the University of Chicago where he earned his Ph.D. degree.

At Bates he was a leading campus figure, for his participation in extracurricular activities as well as scholastically. He was an honor student at Bates where he was elected Phi Beta Kappa in 1935.

Dr. Mayes served as President of the debating council and the Phil-Hellenic Club. He was also a member of the YMCA cabinet and a star-inter-collegiate debater. After receiving his B.A. degree in 1920, he prepared for the church and was ordained a Baptist minister two years later. His first pastorate at the Shiloh Baptist Church of Atlanta was close to Morehouse College where he taught higher mathematics until 1924. The following year e received his M.A. degree from the University of Chicago. Also, during this time he became an instructor of English at South Carolina State College in Orangeburg.

Dr. Mays married Ellen Harven in August of 1920. During a brief hospitalization, she died in Atlanta in early 1923. On August 9, 1926, the reverend Mays married Sadie Gray, a teacher and social worker, who had also received her MA degree from the University of Chicago.

Dr. Mays became dean of the Howard University School of Religion in 1934. During 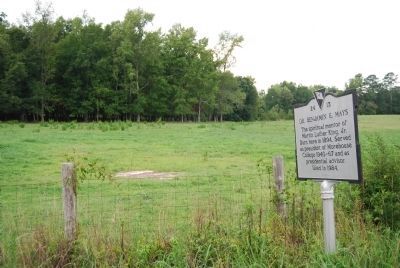 Dr. Mays became President of Morehouse College on July 1, 1940. Morehouse College is a fully accredited liberal arts college for African-American men. Rated Class A by the Southern Association of Colleges and Secondary schools, Morehouse is the alma mater of many leading African Americans.

In December of 1944, Dr. Mayes was elected Vice President of the Federal Council of Churches of Christ in American, the first African American to hold that office.

Dr. Mays was known for his love of journalism. He wrote more than nine books in his lifetime. Dr. Mays’ writings included 19 chapters, 232 articles and over 800 unpublished addresses, lectures, and sermons.

During his 27-year presidency at Morehouse College, Dr. Mays brought a Phi Beta Kappa chapter to the school and built the Morehouse faculty to more than 50% Ph.D.’s. His social autobiography, Born to Rebel, sold more than 25,000 copies. In 1954 at the Evanston Assembly 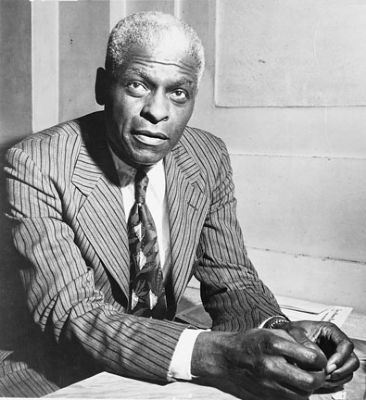 By Brian Scott
5. Dr. Benjamin E. Mays
August 1, 1894 – March 28, 1984
of the World Council of Churches, he internationalized the Civil Rights Movement in his now famous address, “The Church and Racial Tensions.” The United States Congress voted unanimously in 1984 to recommend to President Ronald Reagan that the highest civilian medal of the United States be conferred on Dr. Mays. He received 55 honorary degrees in his lifetime and his 56th degree posthumously. Seven academic buildings and an Atlanta street are named in his memory.

For 12 years, he was President of the Atlanta School Board following his Morehouse presidency. During this time he presided peacefully over the desegregation of the Atlanta public schools. A portrait of Dr. Mays hangs in the South Carolina State House in Columbia and a million dollar scholarship endowment has been established in his memory by the Board of Trustees of Morehouse College. Dr. Mays died on March 28, 1984. A larger than life statue of Dr. Mayes has been erected on the Morehouse College campus.