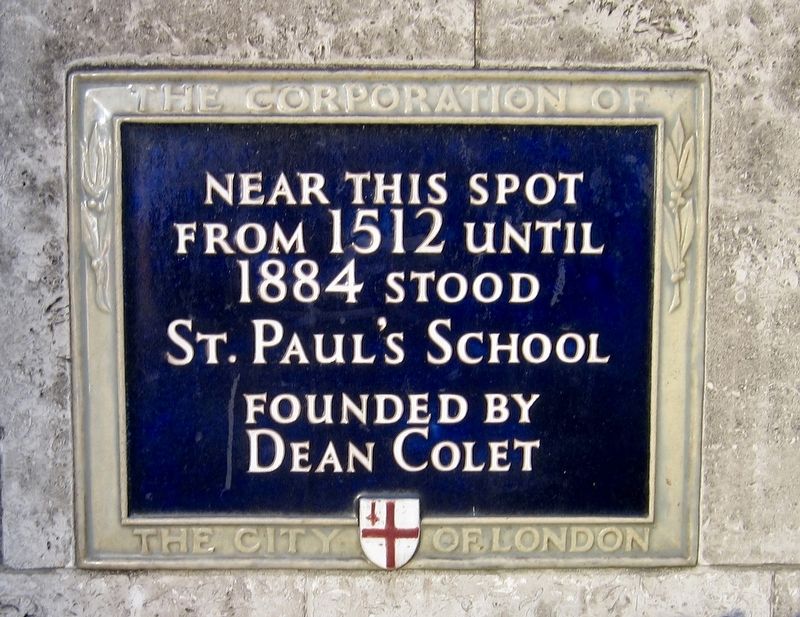 Near this spot
from 1512 until
1884 stood
St. Paul's School
Founded by
Dean Colet

Topics and series. This historical marker is listed in this topic list: Education. In addition, it is included in the UK, England, City of London Corporation series list. 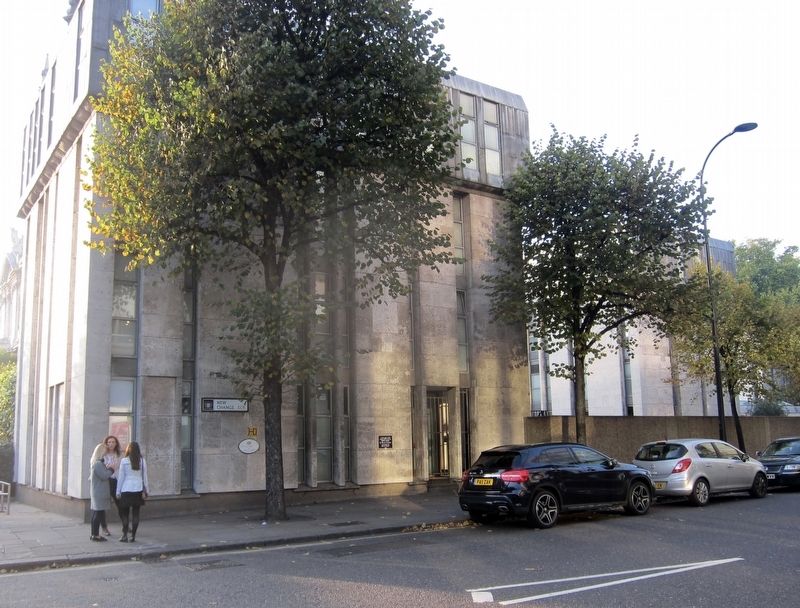 By Andrew Ruppenstein, October 15, 2017
2. St Paul's School Marker - Wide View
1. St Paul's School, London (Wikipedia). "St Paul's School originally takes its name from St Paul's Cathedral in London. A cathedral school had existed since around 1103. By the 16th century however, it had declined, and in 1509, a new school was founded by John Colet, Dean of St Paul's Cathedral, on a plot of land to the north of the Cathedral....St Paul's was the largest school in England at its foundation, and its High Master had a salary of 13 shillings and sixpence weekly, which was double that of the contemporary Head Master of Eton College. The scholars were not required to make any payment, although they were required to be literate and had to pay for their own wax candles, which at that time were an expensive commodity....The original school, which stood in St Paul's Churchyard, was destroyed with the Cathedral in the Great Fire of London in 1666. The school was twice rebuilt, first in 1670, and again in Cheapside in 1822; but towards the end of the 19th century, as London expanded and residents moved away from the City of London and its environs, it was decided that the school should move to larger premises...." (Submitted on December 7, 2017.)

2. John Colet (Wikipedia). "John Colet (January 1467 – 16 September 1519) was an English churchman and educational pioneer....John Colet, friend of Erasmus, was an English scholar, Renaissance humanist, theologian, member of the Worshipful Company of Mercers, and Dean of St. Paul's Cathedral, London. Colet wanted people to see the scripture as their guide through life. Furthermore, he wanted to restore theology and rejuvenate Christianity. Colet is an important early leader of Christian humanism as he linked humanism and reform. John Colet was a friend of Erasmus, a key figure in Christian humanism." (Submitted on December 7, 2017.)
Credits. This page was last revised on December 7, 2017. It was originally submitted on December 7, 2017, by Andrew Ruppenstein of Sacramento, California. This page has been viewed 97 times since then and 6 times this year. Photos:   1, 2. submitted on December 7, 2017, by Andrew Ruppenstein of Sacramento, California.
Share This Page.