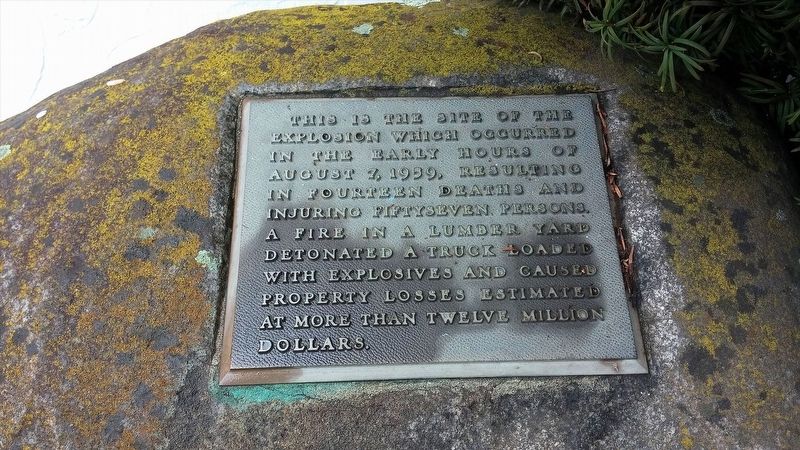 Photographed By Douglass Halvorsen, February 6, 2016
1. 'The Blast' Site Marker
Inscription.
'The Blast' Site. . This is the site of the explosion which occurred in the early hours of August 7, 1959, resulting in fourteen deaths and injuring fifty seven persons. A fire in a lumber yard detonated a truck loaded with explosives and caused property losses estimated at more than twelve million dollars. . This historical marker is in Roseburg in Douglas County Oregon

This is the site of the explosion which occurred in the early hours of August 7, 1959, resulting in fourteen deaths and injuring fifty seven persons. A fire in a lumber yard detonated a truck loaded with explosives and caused property losses estimated at more than twelve million dollars.

Topics. This historical marker is listed in this topic list: Disasters. A significant historical date for this entry is August 7, 1959.

Regarding 'The Blast' Site. 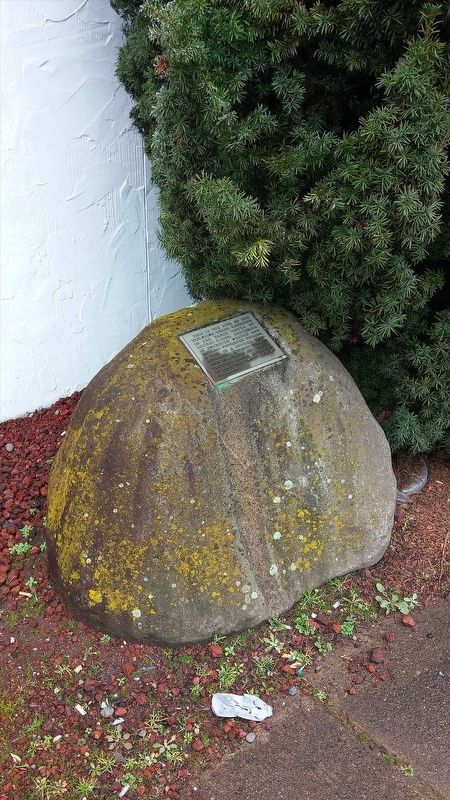 Click or scan to see
this page online
The City of Roseburg website highlights the history of this tragic event and tells us: In the early morning hours of August 7, 1959 a fire at Gerretsen Building Supply Company ignited a truck parked on the adjacent street. The truck was carrying a two ton load of dynamite and four and one-half tons of ammonium nitrate. The subsequent blast leveled eight city blocks. The explosion created a crater fifty-two feet in diameter and twelve feet deep.

Three hundred businesses within a thirty block radius were damaged by the blast. Of those, seventy-two were declared structurally unsafe resulting in major repairs and renovation. Twelve buildings beyond the eight block perimeter were condemned. The face of Roseburg changed forever in an instant. The explosion eventually became commonly know as "The Blast."

Mr. Pat Sullivan, a bystander very near the Blast site that night related the following story:

"I was about twenty feet from the intersection on Pine and Oak and I could see Don De Sues in his Centennial police uniform outlined against the truck. Bill Unrath and somebody else, I don't know who it was, were standing by the Coke building. Assistant Fire Chief McFarland and another fireman were standing down by the fire truck. A real good heavy blaze was going at that time. It was reaching well up. As I was running down, I started to see the sides of the truck 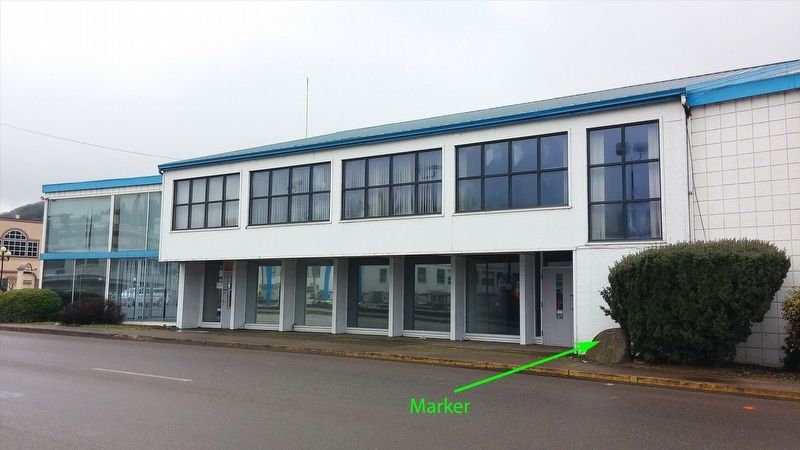 Photographed By Douglass Halvorsen, February 6, 2016
3. 'The Blast' Site Marker
starting to bulge and I hit the dirt. Thank God for Korea. And that was the last time I saw Don De Sues... l got hit in the chest with a piece of metal. I started to get up and the suction of the Blast knocked me down again. The piece of metal went through the pack of cigarettes I had just bought and lodged in my chest. At that time there were no lights whatsoever. Everything was completely dark except for the electrical cords that were bouncing around on the streets that had been blown down from the deal..."

Fourteen people died in the Blast. Many Roseburg citizens were injured. Countless stories have been recorded of heroic acts performed at the time of the Blast and of the rescue and cleanup that continued for weeks following the destruction.

Now, long after those acts have been recorded and archived in news files and long after many of the participants in this catastrophe have passed on, the testament to their perseverance is the surviving rebuilt environment. The human penchant that necessitates a return to normalcy - to fix what is broken - that exhibits an eternal optimism of spirit - was not destroyed by an explosion.

Today the Roseburg Downtown Historic District comprises all of the original City of Roseburg Plat. One of the most significant spatial aspects of an early City of Roseburg Plat was the one hundred foot block width between Jackson Street and Main Street. This north/south strip of narrow blocks represented the heart of the city's original retail district and its north/south transportation corridor. A bridge at the northern city limit extended Jackson Street beyond the constraints of Deer Creek. To the west, the South Umpqua River provided another natural boundary.

Properties southeast of the original plat have also been incorporated in the newly created district to include the train depot. Moving the north/south transportation corridor west to Stephens Street in 1922 effectively bypassed the central business district.

Construction dates for buildings downtown range from the late 1860's into the 1950's. A variety of architectural styles and building functions were included in this eighty year period. The earliest commercial buildings located on SE Jackson Street and adjacent side streets are one or two-story buildings with narrow storefronts.

By 1905 larger brick buildings became the favored style. The subsequent building era from 1910 through the early 1930's saw the implementation of a new building material, building style and use. Roseburg saw the addition of professional office buildings to its downtown.

Another interesting aspect of this era's building was the use of a building material new to Roseburg - cast stone. F. F. "Pat" Patterson opened a cast stone factory and approximately ten cast stone buildings were constructed. The largest cast concrete stone building constructed was the Douglas County Courthouse at 1036 SE Douglas Avenue. By 1930 construction within Roseburg came to a near standstill thus ending the first primary period of historic significance.

The Roseburg Historic District area had a resurgence of growth in the late 1940's built upon the post-war era's economic vitality. The local timber industry prospered. Three large automobile dealerships built lots and showrooms. Concrete block was the building material of choice in these one-story structures. Two of the showrooms included large curved glass display windows representative of the Art Moderne architectural style.

By the early 1950's, the 700 block of SE Jackson experienced a substantial retail building boom. Window fenestration and massing define the majority of the structures on this block representative of the modern architectural period of the 1930's through the 1950's.

Historically, we have returned to where this narrative began...August 7, 1959. In the realm of planning and construction a new period of significance had dawned. Maps were prepared by the City of Roseburg Engineering Department in September of 1959 detailing the eight blocks leveled by the Blast.

Replacement of almost all the windows in downtown commercial buildings was necessary after the Blast. The August 17, 1959 issue of the News Review (Roseburg's local newspaper) reported, "There was no radiation fall-out. Glass powder, glass particles, glass splinters are everywhere...A great deal of merchandise has been discarded and destroyed because of damage from glass particles."

Many windows were replaced with metal frame windows rather than the original wood frame sash windows. Many of the old brick buildings were inspected and deemed sound but had obvious aesthetic scarring. In keeping with the times, a facade spruce-up included coverings of metal, stucco, or plywood. Signage was updated. Awnings were replaced.

Some structures downtown received vast reconstruction. The Caro Building, 506 SE Jackson, was such a building. New walls were constructed for the front facade and corner. A stucco finish with board and batten now stands as a replacement to what was once a highly embellished two-story structure with cast iron columns and pilasters, an arched, centered doorway and arched windows on both the first and second floors.

Transportation routes through Roseburg were also altered. The Oak Street bridge received considerable damage from the Blast putting added pressure on the alternate north and southbound route of Stephens Street (Highway 99). In December of 1959, to reduce traffic, the Roseburg Planning Commission proposed that Pine Street would support southbound traffic through the city.

At the same time the Planning Commission proposed a riverfront park area following the river for 900 feet. Approximately 200 feet wide, it separated the new industrial area from the river. An overpass bridge would be constructed on Washington Avenue that would span above much of the new industrial area ending at a parking facility. The downtown would become a pedestrian centered area.

The plans were grand but the Urban Renewal money that would have made it possible did not materialize.

Three years after the Blast the Washington bridge was completed. In-fill development in the Blast core area became primarily commercial. Several blocks adjacent to the river were designated public reserve and a riverfront park developed.

The peaceful face of the City of Roseburg today belies the tragedy of 1959. The rebuilding did not take on the magnificent characteristics envisioned by some in the aftermath of the Blast but remained true to the City's roots in tone of character and purpose.