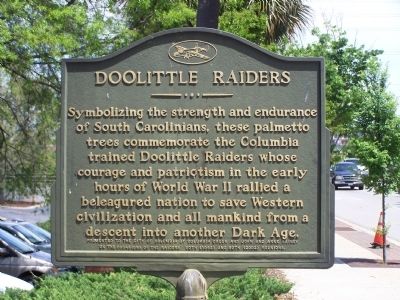 By Mike Stroud, April 2008
1. Doolittle Raiders Marker
Inscription.
Doolittle Raiders. . . Symbolizing the strength and endurance of South Carolinians, these Palmetto trees commemorate the Columbia trained Doolittle Raiders whose courage and patriotism in the early hours of World War II rallied a beleagured nation to save Western civilization and all mankind from a descent into another Dark Age. . This historical marker was erected in 2002 by Presented to the City of Columbia by Columbia Green and John and Mary Rainey On The Occasions of the Raiders' 50th (1992) and 60th (2002) Reunions. It is in Columbia in Richland County South Carolina

Symbolizing the strength and endurance of South Carolinians, these Palmetto trees commemorate the Columbia trained Doolittle Raiders whose courage and patriotism in the early hours of World War II rallied a beleagured nation to save Western civilization and all mankind from a descent into another Dark Age.

Location. 33° 59.826′ N, 81° 2.831′ W. Marker is in Columbia, South Carolina, in Richland County. Marker is at the intersection of Gervais Street (Highway 1/378) and Gist Street, on the right when traveling west on Gervais Street. At the Gervais St. entrance to S.C. State Museum complex. Touch for map. Marker is in this post office area: Columbia SC 29201, United States of America. Touch for directions. 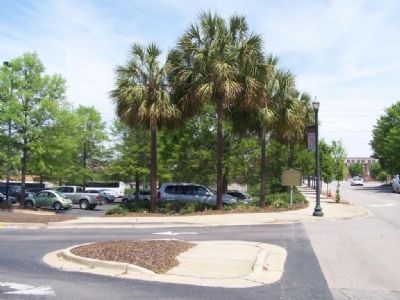 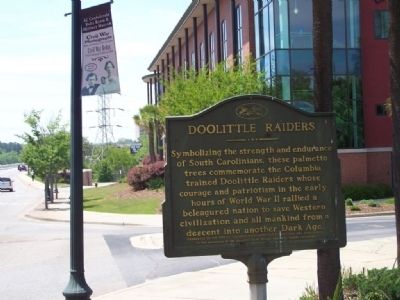 By Mike Stroud, 2008
3. Doolittle Raiders Marker
At the Gervais Street Entrance to S.C. State Museum Complex.
. On 18 April 1942, 80 airmen from the 17th. Bomb Group climbed into 16 B-25 medium bombers, took off from the deck of the aircraft carrier USS Hornet, and proceeded west to bomb Tokyo and several other Japanese cities. (Submitted on August 15, 2009, by Brian Scott of Anderson, South Carolina.)

5. The FReeper Foxhole Profiles General "Jimmy" Doolittle. Doolittle was one of the pioneers of instrument flying and of advanced technology, while also being an outstanding combat leader, commanding the Twelfth, Fifteenth, and Eighth Air Forces during World War II. (Submitted on August 15, 2009, by Brian Scott of Anderson, South Carolina.)

6. The Doolittle Tokyo Raiders Photos. Here are some photos from before, during and after the Doolittle Raid. (Submitted on August 15, 2009, by Brian Scott of Anderson, South Carolina.)

7. James Doolittle, 96, Pioneer Aviator Who Led First Raid on Japan, Dies. James H. Doolittle, an aviation pioneer and a retired lieutenant general in the Air Force who led the daylight air raid on Tokyo and other Japanese cities four months after the Japanese attacked Pearl Harbor, died yesterday at the age of 96. (Submitted on August 15, 2009, by Brian Scott of Anderson, South Carolina.) 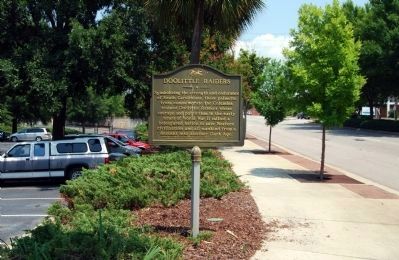 By Brian Scott, August 9, 2009
4. Doolittle Raiders Marker -
Looking East Along Gervais Street
years ago Jimmy Doolittle, then a lieutenant colonel in the Army Air Forces, flew to a small air base south of here seeking volunteers for a World War II mission that he described only as top secret and extremely hazardous.

Nearly 140 men base volunteered, and 80 of those were selected. Their mission: bomb Tokyo.

It was daring and seemingly suicidal. The five-man crews, aboard 16 heavily loaded B-25 bombers, were to take off from an aircraft carrier 450 miles from their target, knowing there was no turning back. The bombers could not land on the carrier; instead, after dropping their bombs they were to continue on, hoping to land at two primitive landing strips in Chinese territory that was not controlled by the Japanese.

On April 18, 1942 -- four months and 11 days after the Japanese attack on Pearl Harbor -- Colonel Doolittle's Raiders accomplished their mission.

Flying low, they approached Japan undetected and dropped 16 tons of bombs on factories and military installations in Tokyo and four other cities. The bombs caused little material damage, but they sent shock waves through Japan and lifted the morale of a dispirited America.

Somehow, 73 of the 80 crew members survived that historic mission. And on Thursday, 36 of the 40 who are still living will, for the first time, return to Columbia to commemorate the 50th anniversary of the 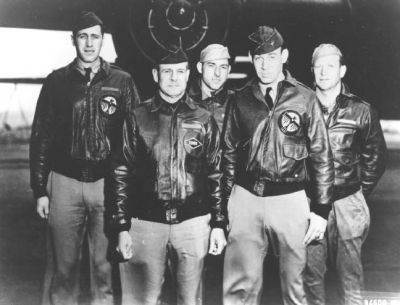 By Unknown Source
5. Plane 1 Crew: Henry Potter, James Doolittle, Fred Braemer, Richard Cole, Paul Leonard
raid. Their leader, who was promoted to general and awarded the Medal of Honor for the raid on Japan, is now 95 years old and living in Monterey, Calif. But he is unable to attend the three-day celebration.

Since World War II ended, the Raiders have met every year except one, said Brig. Gen. Richard Knobloch of San Antonio, the chairman of the Doolittle Tokyo Raiders Association.

As with all extraordinary events, the raid serves as the defining moment of their lives. They were young and, as one of the navigator-bombardiers, James Macia of San Antonio, said, "full of spit and vinegar."

They had been at the Columbia Army Air Base only two weeks when Colonel Doolittle sought their help. Few remember much about this city, but they did know the colonel, who had been a World War I flier and had a reputation as a daredevil.

Colonel Doolittle was counting on surprise. He knew the Japanese felt secure from an air attack because Japan was beyond the range of Army bombers.

"The old man," as his raiders call him, also knew that a B-25 could do the job from a Navy carrier. But his plans went askew on the rainy morning of April 18 when, some 800 miles at sea, a Japanese boat was spotted. The Americans sank the boat, but they did not know whether their whereabouts had been reported. The mission was quickly launched, but the Raiders knew they lacked the fuel to get to the landing strips in China.

They took off from the carrier Hornet at 8 A.M., hit their targets about noon and soared away to the west. They flew for nine hours more, but as the fuel tanks emptied, the crews of 11 of the planes parachuted out. Four other planes crash-landed near the Chinese coast, killing four crewmen, and the remaining plane landed in Vladivostok, Siberia.

Seven crewmen who parachuted out over Japanese-occupied China were captured, and three of them were executed. They were William G. Farrow, of Darlington, S.C.; Dean E. Hallmark, of Robert Lee, Tex., and Harold Spatz, of Lebo, Kan.

Columbia and local businesses have planned and paid for the $115,000 Raiders celebration, which includes a state dinner, a ball, an exhibit at the South Carolina State Museum and the premiere of a play about the raid.

But the raid has already been documented in the 1943 movie "Thirty Seconds Over Tokyo," which was based on the book by Ted Lawson, a pilot who died earlier this year.