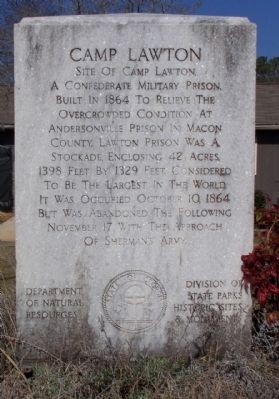 Photographed By Mike Stroud, 2009
1. Camp Lawton Marker
Inscription.
Camp Lawton. .
Site of Camp Lawton A Confederate Military Prison built in 1864 to relieve the overcrowded condition at Andersonville Prison in Macon County. Lawton Prison was a stockade, enclosing 42 acres. 1398 feet by 1329 feet considered to be the largest in the world. It was occupied October 10, 1864 but was abandoned the following November 17 with the approach of Sherman's army.. . This historical marker was erected by State of Georgia Department of Natural Resources . Division of State Parks Historic Sites and Monuments. It is in Millen in Jenkins County Georgia

Site of Camp Lawton
A Confederate Military Prison
built in 1864 to relieve the
overcrowded condition at
Andersonville Prison in Macon
County. Lawton Prison was a
stockade, enclosing 42 acres.
1398 feet by 1329 feet considered
to be the largest in the world.
It was occupied October 10, 1864
but was abandoned the following
November 17 with the approach
of Sherman's army.

Topics and series. This historical marker is listed in this topic list: War, US Civil. In addition, it is included in the Sherman’s March to the Sea series list. A significant historical date for this entry is October 10, 1865. 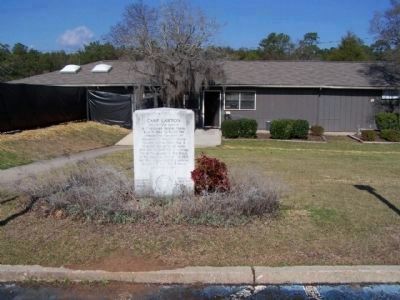 Regarding Camp Lawton. Camp Lawton was located about five miles from Millen, Georgia, and on the Augusta Railroad. The prison was laid out in the customary style of Confederate prisons with sloping hills at each end and a small stream flowing between the hills. The walls were 15 feet high and sufficient wood was left inside the walls so that the prisoners could construct crude huts. Rations were somewhat better than Andersonville but were still not sufficient to sustain life.

The prison was open for two months. The Lawton cemetery held 784 bodies. These bodies were moved to Beaufort National Cemetery in South Carolina in February 1868. Where Camp Lawton stood in 1868 there is now a state park, Magnolia Springs. 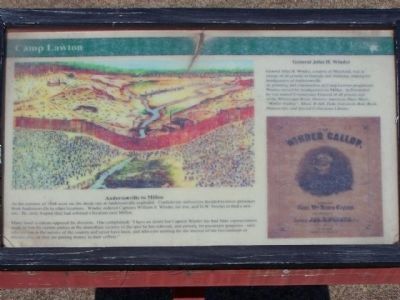 Photographed By Mike Stroud, 2009
3. Camp Lawton Interpretive Marker 1
( Lower left )
Andersonville to Millen
As the summer of 1864 wore on, the death rate at Andersonville exploded. Confederate authorities decided to move prisoners from Andersonville to other locations. Winder ordered Captains William S Winder, his son, and D.W. Vowles to find a new site. By early August they had selected a location near Millen.
Many local residents opposed the decision. One complained, "I have no doubt but Captain Winder has had false representation made to him by certain parties in the immediate vincinity of the spot he has selected, and entirely for pecuniary purposes-men who are not in service of the country and never have been, and who care nothing for the interest of the Government or anyone else, so they are putting money in their coffers."
Click here for a list of markers that are related to this marker. Civil War Camp Lawton

Additional commentary.
1. Great Grand Father Sam was at Camp Lawton
My great grand father, Samuel George Fletcher, a private in the 5th N Y Heavy Artillery and was wounded and captured during the Battle of Piedmont, VA on June 5, 1864. He was moved to Andersonville Prison some time after that and was recorded to have been transferred to Camp Lawton on November 11, 1864. He was exchanged back to the Union at Florence, SC on December 10, 1864 and rejoined the Union at Camp Parole, MD on December 15,1864 at the age of 17 years and two months. Happily for me, he survived and lived until 1920 in Brooklyn, NY after marrying three times and fathering six children. Note To Editor only visible by Contributor and editor
— Submitted March 22, 2009, by Samuel George Fletcher of Williamsburg, Virginia. 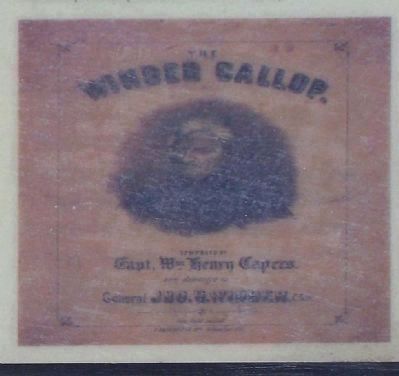 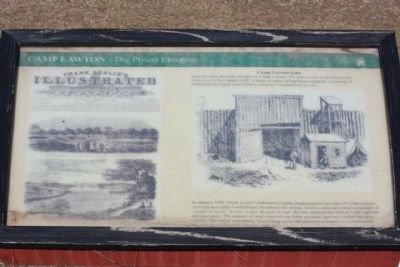 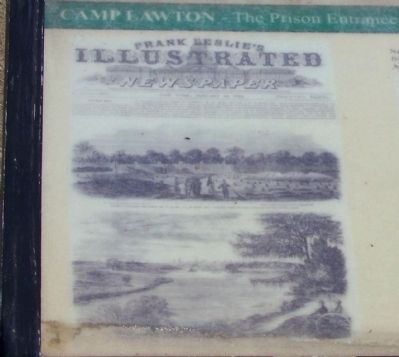 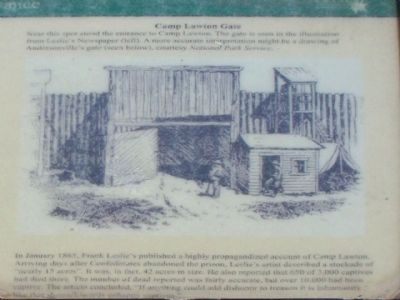 Photographed By Mike Stroud, February 19, 2009
7. Camp Lawton Interpretive Marker 2
Camp Lawton Gate
Near this spot stood the entrance to Camp Lawton. The gate is seen in the illustration from Leslie's Newspaper. A more accurate interpretation might be a drawing of Andersonville's gate (seen below). courtsey National Park Service
In January 1865, Frank Leslie's published a highly propagandized account of Camp Lawton. Arriving days after Confederates abandoned the prison, Leslie's artist described a stockade of "nearly 15 acres." It was, in fact, 42 acres in size. He also reported that 650 of 3,000 captives had died there.The number of dead reported was fairly accurate, but over 10,000 had been captive. The article concluded," If anything could add dishonor to treason it is inhumanity like that shown towards unhappy captives." 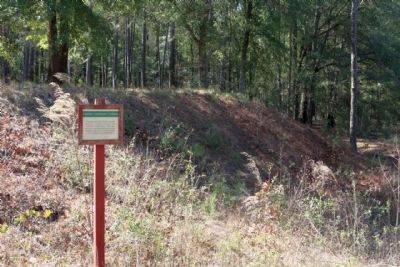 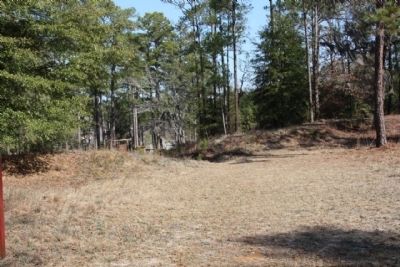 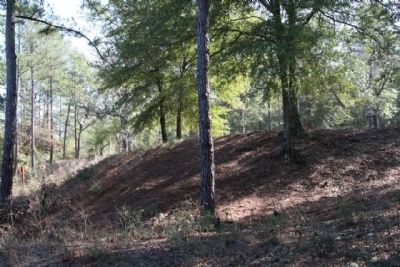 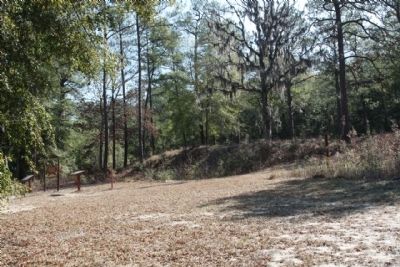