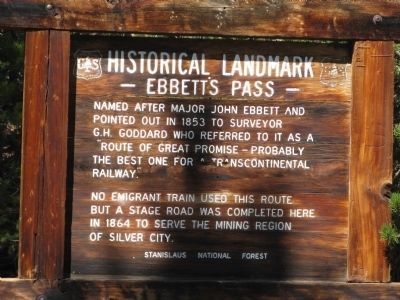 By Syd Whittle, September 13, 2008
1. Ebbetts Pass Marker
Inscription.
Ebbetts Pass. Historical Landmark. Named after Major John Ebbett and pointed out in 1853 to surveyor G.H. Goodard who referred to it as a “route of great promise – probably the best one for a transcontinental railway.”, No emigrant train used this route but a stage road was completed here in 1864 to serve mining region of Silver City. . This historical marker was erected by United States Forest Service – Stanislaus National Forest.. It is Near Markleeville in Alpine County California

Named after Major John Ebbett and pointed out in 1853 to surveyor G.H. Goodard who referred to it as a “route of great promise – probably the best one for a transcontinental railway.”

No emigrant train used this route but a stage road was completed here in 1864 to serve mining region of Silver City.

Topics and series. This historical marker is listed in these topic lists: Exploration • Railroads & Streetcars • Roads & Vehicles • Settlements & Settlers. In addition, it is included in the California Historical Landmarks series list. A significant historical year for this entry is 1853. 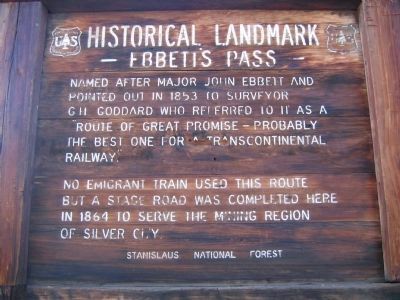 By Syd Whittle, July 2, 2006
2. Ebbetts Pass Marker
Earlier photo of marker taken prior to the re-painting of text

Click or scan to see
this page online
Winter. Touch for map. Marker is in this post office area: Markleeville CA 96120, United States of America. Touch for directions.

More about this marker. This site was designated California Registered Historical Landmark No.318 on July 12, 1939.
Statement of Significance:
The Emigrant Trail through Ebbetts Pass, discovered by and named after 'Major' John Ebbetts, was opened up in the early 1850s, but no wagon road went that way until 1864, when a toll road, under the name of Carson Valley and Big Tree Road, was completed to help open up the Comstock Lode in Nevada.

Regarding Ebbetts Pass. John Ebbetts arrived in California in 1849 at the age of thirty-three. At the time he was the Captain of the Knickerbocker Exploring Party of New York. In April 1850 he took a party of prospectors over the pass that would later be named in his memory.

In 1853 he returned to the area while leading a survey party for the Atlantic and Pacific Railroad Company. They were searching for a pass over the Sierras that would be suitable for the Transcontinental Railroad. He remembered that when crossing this area in 1850 there was very little snow and he felt that this was the best route for that purpose. He recommended this route to his friend George H. Goddard, a surveyor for the company.

The possibility of any 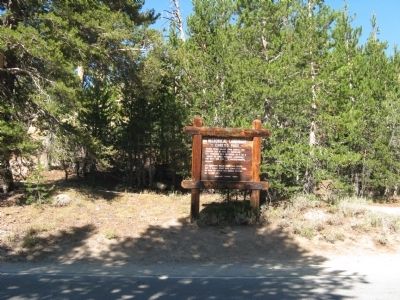 By Syd Whittle, September 13, 2008
3. Ebbetts Pass Marker
further exploration of the area by Ebbetts was ended when on April 16, 1854, while traveling to Petaluma on the steamer Secretary, the steamer’s boilers exploded while entering Petaluma Creek and John Ebbetts was fatally injured.

In 1854 this route, which was never used for the railroad, was named by George Goddard in his memory.

Note: It was also noted that the spelling of his name appears in publications as Ebbett and also Ebbetts. In papers submitted to the California Geological Survey, Goddard spelled it as Ebbet.

Additional commentary.
1. Re-painting of Lettering on Marker
During the summer of 2006 I stopped to read this marker. At the time the paint on the letters was so chipped and worn off that it was very difficult to read. I stopped by the Alpine Ranger Station and asked for permission to re-paint the letters. Later in the month a friend and I drove back up the pass and spent a day re-painting this marker as well as the Hermit Valley marker.
— Submitted September 17, 2008, by Syd Whittle of Mesa, Arizona.

By Syd Whittle, September 13, 2008
4. A Section of the Current Alignment of Ebbetts Pass 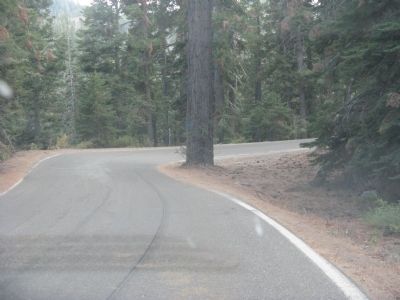 By Syd Whittle, September 13, 2008
5. A Section of the Current Alignment of Ebbetts Pass 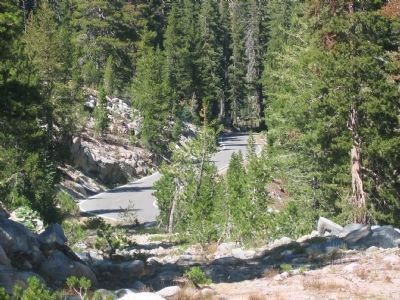 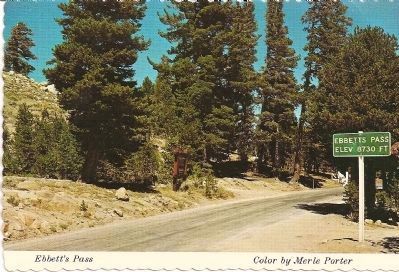 Merle Porter. Distributed by Royal Pictures, Colton,Ca.
7. Vintage Postcard - Ebbetts Pass Marker in Background and State Summit Sign
Description on Postcard: Ebbetts Pass The imigrant trail through Ebbett's Pass was opened in the early 1850's, but no wagon road was built until 1864 with the opening of the Comstock Lode in Nevada. A toll road was completed in 1864 under the name of Carson Valley and Big Tree Road. In September of 1861, a group of Bactrian Camels, from Gobi Desert, Mongolia, were driven from San Francisco to Dayton, Nev., to be used for transportation in the mines. The High Sierra Country is grandly picturesque, a country rich in history...M.P. 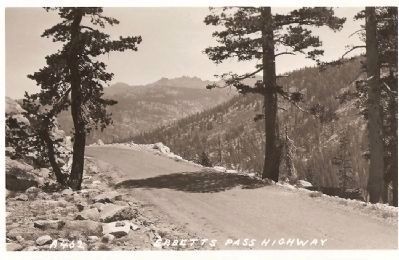