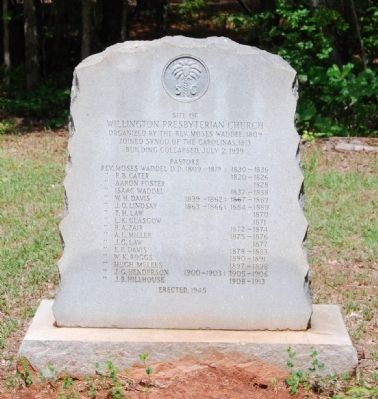 Topics. This historical marker is listed in this topic list: Churches & Religion. A significant historical date for this entry is July 2, 1764.

Location. 33° 57.433′ N, 82° 28.583′ W. Marker is in Willington, South Carolina, in McCormick County. Marker is on Willington Cemetery Road. Marker is located at the end of the road, across from the entrance to

Click or scan to see
this page online
Willington Cemetery. Touch for map. Marker is in this post office area: Mc Cormick SC 29835, United States of America. Touch for directions.

Additional commentary.
1. Willington Presbyterian Church
In 1820 the session of Wellington, in connection with that of Hopewell, made out a call for Rev R.B. Cater, who was then living at "Rock Mills," Anderson, in charge of the Churches of Good Hope and Roberts. This was accepted and he was installed at W. pastor of the two churches. 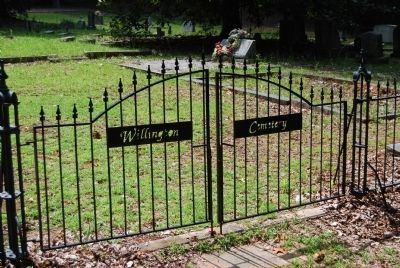 Photographed By Brian Scott, September 13, 2008
3. Willington Cemetery Gate
The cemetery is across from the Willington Presbyterian Church marker.
Cater was a native of Beaufort District, South Carolina. The interesting circumstances of his death may be found in the proceedings of the Tuscaloosa Presbytery, Alabama for 1850. Under this lively and interesting minister, these churches received rather a different impulse from that which had been hitherto given them. Sabbath Schools were instituted and benevolent enterprises begun. There is yet extant a sermon delivered before a "Ladies Association" organized by Mr. Cater for the education of young men in the ministry; and another preached as a funeral discourse on the death of a respected elder of Willington. Many interesting camp-meetings were held at both churches, adding in a few years valuable members in the church. In these meetings Mr. Cater was generally assisted by his brother-in-law, Rev. Henry Reid, and the writer remembers as a child, how the deep organ-like tones of the latter seemed to vibrate over the solemn assembly gathered under the leafy arbour, harmonizing so well with the pathos, and argumentative pleadings of the speaker, while the rich musical voice of the other fell on the air like the sound of some silver trumpet.

"So soft, so clear,
The listener held his breath to hear."
They were both revival preachers, but especially Mr, Reid, and whatever may have been his ecclesiastical errors, lie has without doubt, seals to his 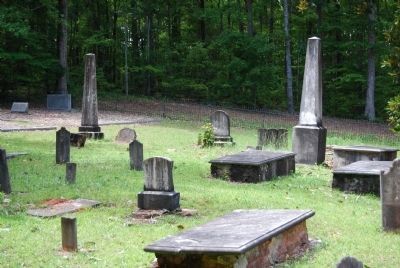 Photographed By Brian Scott, September 13, 2008
4. Willington Cemetery
ministry in these churches. He was a man of strong feelings and an original thinker, but because of his obstinate prejudices and satirical powers was a bitter controversialist. His irregular course after his return from Texas in 1840 is well known to the brethren, but here it was more sensibly felt; as he gathered two small independent congregations within the bounds of Willington and Hopewell, which since his death have been received as regular churches, but which have created such a diversion in strength as to weaken the whole.

Mr. Reid had preached at Hopewell in his best days, and had been here a successful teacher of youth; and now after many wanderings, and having buried all his family in Texas, he returned to die in this little obscure church of his old age, thus quietly closing a life of more than sixty years, most of which had been spent in earnest labours for the gospel of love.

Perhaps at no period of its existence has Willington church presented a more intelligent audience, or given more striking indications of spiritual growth than during Mr. Cater's short term of service. At that time were gathered in many of both sexes whom the Lord was been pleased to own, who lived as ornaments to society, but most of whom ere this met their amiable teacher before the throne. Though so useful in his ministry and exceedingly popular, several circumstances combined 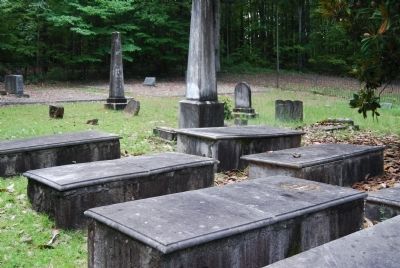 In 1823, the Presbytery of South Carolina made an attempt at the suggestion of Dr. Barr, and others, to establish a Theological Seminary after the plan of the Southern and Western Theological Seminary at Maryville, Tennessee, and Mr. Cater was selected as a suitable person for a traveling agent. Following the bent of his impulsive and ardent nature, his agency was undertaken and prosecuted without the advice of his churches. The people murmured at his protracted absences, especially as there seemed to be no effort to supply the deficiency. At length Mr. Cater met, at an ecclesiastical meeting, a young Northern minister whom he engaged to occupy his pulpits for a time. This was Rev. Aaron Foster, of New England, who being employed at this time by the Ladies Benevolent Association of Charleston, as an Evangelist for the upper country, agreed to itinerant for a time between this place and Pendleton village. Things remained thus for nearly two years, and at each return of the pastor from his unsuccessful embassy he was constrained to see that the hearts of the people were being won over to the stranger. There were already heavy arrearages in the salary for which the two churches were bound, ami his frequent absences had absolved their consciences from any further obligation in this particular. In 1826, at the suggestion of one who loved him too well 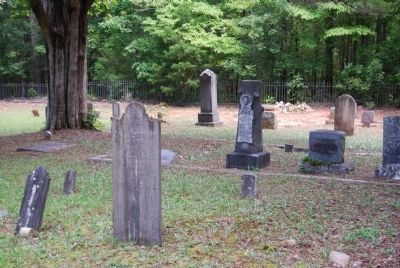 Photographed By Brian Scott, September 13, 2008
6. Willington Cemetery
to retain him in a position so embarrassing, he resigned his pastoral charge. Two years after that lie was re-elected at Hopewell, but was driven away by an unhappy division in the session. Heat one time taught school in Greenville; and his last place of ministration in the State was at old Pendleton, from which he removed in 1836. Judging from his frequent removals, Mr. Cater was less useful as a pastor than as an Evangelist—hence we find his ardent, impulsive, and loving nature, spending its glowing zeal upon building up and forming new churches almost to the end of his life." Mrs. M.E.D.

Wellington church numbered one hundred and one members, in 1828, sixteen of whom were added within the preceding twelve months, one-hundred and fifteen members in 1829. (Source: History of the Presbyterian Church in South Carolina, Volume 2 by George Howe (1883), pgs 384-386.)
— Submitted November 28, 2009, by Brian Scott of Anderson, South Carolina.
2. Willington Church (Abbeville), from 1840
The Rev. William H. Davis was received by South Carolina Presbytery as a licentiate from Union Presbytery, on the 22d of March, 1830, and was ordained and installed as pastor of Hopewell and Willington Churches, on the 22d of May, 1839. On the 1st of May, in 1846, this double pastorate was dissolved. He served the Willington Church until 1860.

"The strength of the church," says Mrs. M.E.D., "in its palmiest days, lay in its noble women, who gave their sympathies and encouragement when they could give nothing else. More precious than gold—yea, than fine gold!"

The first elders were Moses Dobbins, Peter Gibert, Esq., Major E. Noble, Peter B. Rogers. About 1828, in connection with the preceding, Andrew Weed, Peter Guillebeau, J.C. Matthews, N. Harris, M.D., Jacob Bellott, John B. Ball, Oscar Bouchillon and Alexander Houston. [Stephen Gibert was an elder before 1822, when he died.] (In 1842 the elders were Andrew Weed, Alexander Houston, Peter Guillebeau, Dr. William Harris, John B. Bull, according to the list in the minutes of Presbytery, March 26, 1842.) About 1849, S.H. Gibert, Paul Rogers and Wm. T. Drennan were elected. The elders, according to the minutes of Synod in 1855, were Robt. Brady, N. Harris, Paul Rodgers, Wm. T. Drennan. The first set of deacons was under the pastorate of Rev. W.H. Davis. Their names were Peter B. Moragne, A.H. McAlister, Edward Calhoun, John LeRoy and Peter Guillebeau. Total in communion in 1822,64; in 1823.69; in 1824,90; in 1825, 85; in 1830, 108; in 1834, 123; in 1839,90; in 1843, 100; in 1845, 114; in 1850, 112; in 1853, 90. Dr. Baker twice visited Willington Church, and there was a considerable revival of religion. At one time there were about thirty accessions. The cause of temperance flourished at one time, a society being organized in 1830. Rev. Dr. Waddell, the president; Alexander Houston, vice-president; W.W. Waddel, secretary; N. Harris, M.D., E.P. Gibert, P.B. Rogers, S.C. Matthews and R.G. Quarles, directors. This society was energetic and active for a length of time, and useful. The religious instruction of the Negroes was not neglected, as the galleries of the church indicated, by their large attendance, the interest they took in religious worship. (Source: History of the Presbyterian Church in South Carolina, Volume 2 by George Howe (1883), pgs 757-758.)
— Submitted November 28, 2009, by Brian Scott of Anderson, South Carolina.
3. Dedication Plaque
Once located in the Willington Presbyterian Church: