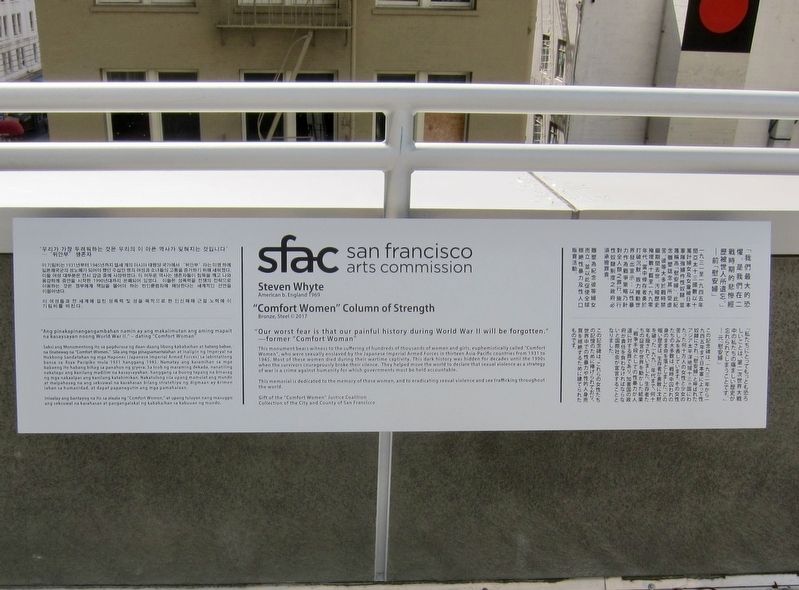 "Our worst fear is that our painful history during World War II will be forgotten." - former Comfort Woman

This monument bears witness to the suffering of hundreds of thousands of women and girls, euphemistically called "Comfort Women", who were sexually enslaved by the Japanese Imperial Armed Forces in thirteen Asia-Pacific countries from 1931 to 1945. Most of these women died during their wartime captivity. This dark history was hidden for decades until the 1990s when the survivors courageously broke their silence. They helped move the world to declare that sexual violence as a strategy of war is a crime against humanity for which governments must be held accountable. This memorial is dedicated to the memory of these women, and to eradicating sexual violence and sex trafficking throughout the world. 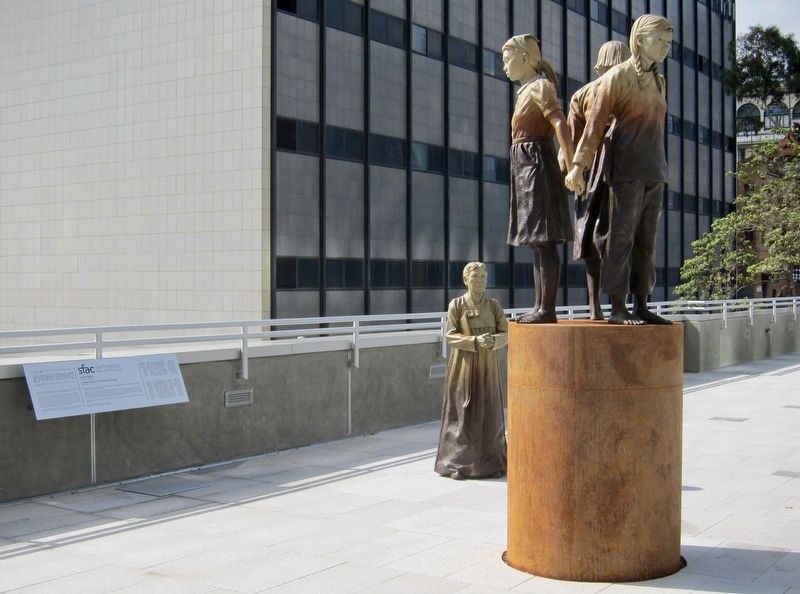 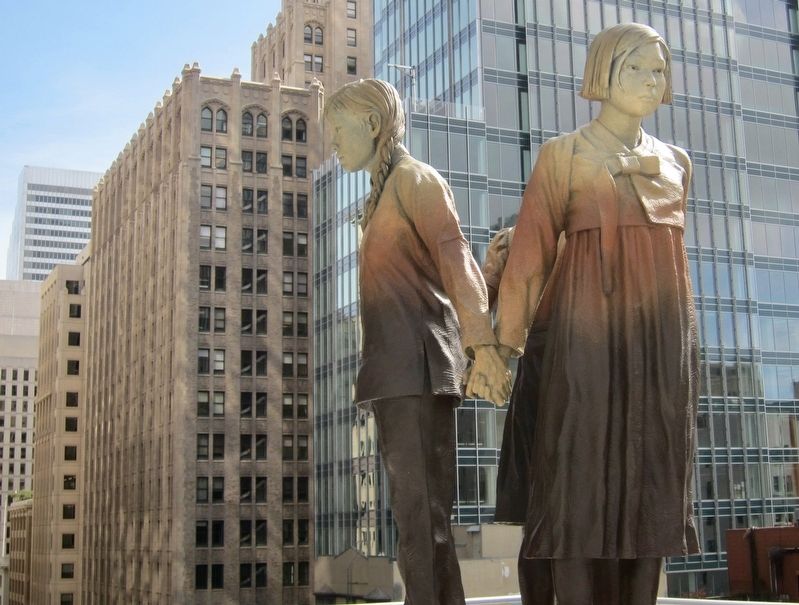 in these topic lists: War, World II • Women. A significant historical year for this entry is 1931.

More about this marker. The memorial is found in southeast corner of St. Mary's Square, on the concrete elevated terrace. It is not visible from the street.

Also see . . .
1. "Comfort Women" Justice Coalition. Organization website homepage:
"Comfort Women" is the Japanese Imperial government's euphemism for the women and children they trafficked as sex slaves between 1932 and 1945, until the end of World War II. Most of the victims were Korean and Chinese, although many others were from the Philippines, Indonesia, the Netherlands, Burma, Thailand, Vietnam, Malaysia, Australia, East Timor, Hong Kong, and Macau. While some were recruited by false advertisements promising work as house maids, factory workers and nurses, the majority were abducted and violently coerced into sexual slavery for Japanese soldiers at government sponsored “comfort stations” intended to improve army morale, as a strategy of war. It is estimated that some 400,000 women and children were forced to be sex slaves for Japanese soldiers and officers at these government-sponsored rape camps. The "Comfort Women" were often kept in sub-human conditions and suffered from starvation, physical and psychological abuse, disease, infections, and rampant STD's. Many committed suicide. Only about 10 to 25% of the victims survived the end of the war...." (Submitted on March 8, 2018.)

2. ‘Comfort Women’ Statue in San Francisco Leads a Japanese City to Cut Ties. New York Times; Nov. 25, 2017
"The mayor of the Japanese city of Osaka has said he is cutting ties with San Francisco because of a new statue there, overlooking a small park downtown. The statue has three figures holding hands on a pedestal, representing girls from Korea, China and the Philippines. Beside them is a likeness of the Korean activist Kim Hak-sun....It is a commemoration of the tens of thousands of “comfort women” who were detained and raped by Japanese soldiers before and during World War II. The issue still strains the relationship between South Korea and Japan, two key United States allies whose cooperation is vital to checking North Korea’s aggression, and to balancing China’s power in East Asia...." (Submitted on March 8, 2018.)