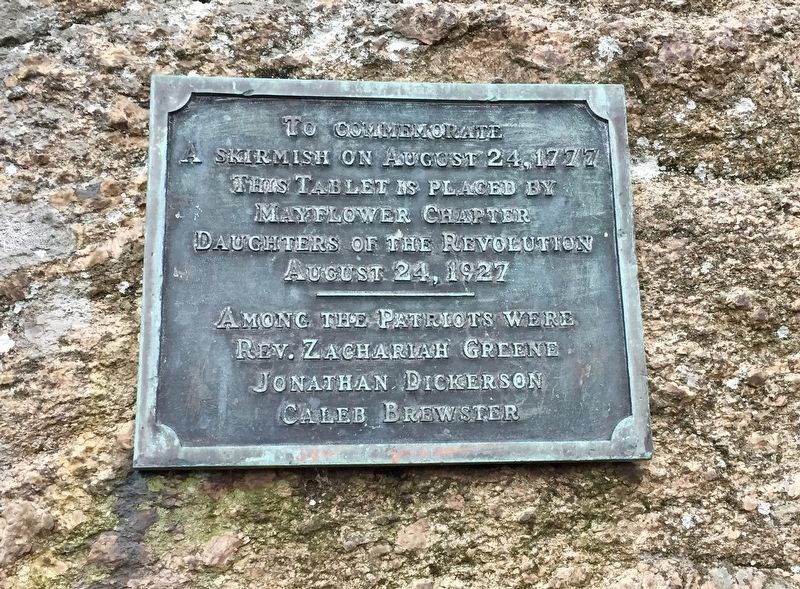 Photographed By Andrew Ruppenstein, March 3, 2018
1. Patriot's Rock Marker
Inscription.
Patriot's Rock. .
To commemorate a skirmish on August 24, 1777 this tablet is placed by Mayflower Chapter Daughters of the Revolution August 24, 1927

Among the patriots were Rev. Zachariah Greene Jonathan Dickerson Caleb Brewster. . This historical marker was erected in 1927 by Daughters of the Revolution. It is in Setauket in Suffolk County New York

To commemorate
a skirmish on August 24, 1777
this tablet is placed by
Mayflower Chapter
Daughters of the Revolution
August 24, 1927

Erected 1927 by Daughters of the Revolution.

Topics and series. This historical marker is listed in these topic lists: Colonial Era • War, US Revolutionary. In addition, it is included in the Daughters of the American Revolution (DAR) series list. A significant historical date for this entry is August 24, 1777.

Other nearby markers. At least 8 other markers are within walking distance of this marker. Setauket Post Office (about 300 feet away, measured in a direct line); Capt. Joseph Swift House (about 400 feet away); 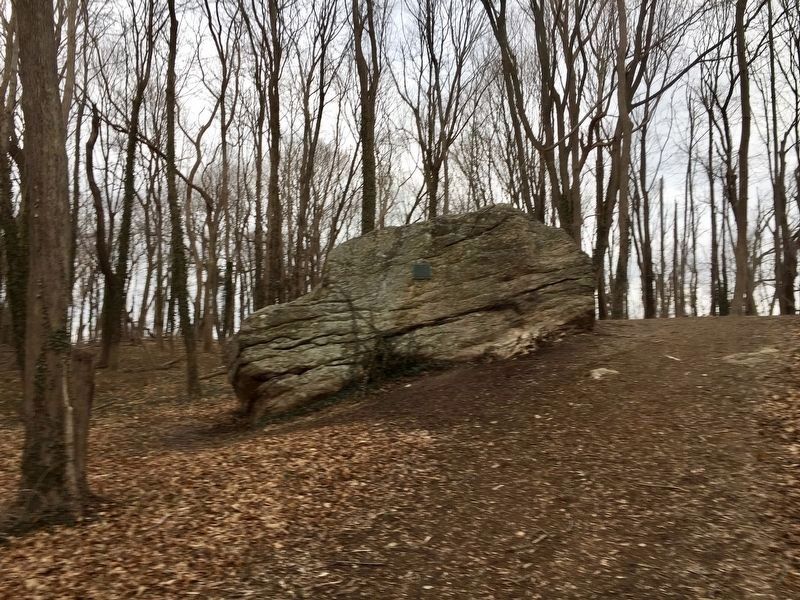 More about this marker. The rock and marker are visible from and quite close to the road.

Also see . . .
1. Battle of Setauket (Wikipedia). "The Battle of Setauket (August 22, 1777) was a failed attack during the American Revolutionary War on a fortified Loyalist outpost in Setauket, Long Island, New York, by a force of Continental Army troops from Connecticut under the command of Brigadier General Samuel Holden Parsons....In an attempt to repeat the success of the earlier Meigs Raid against Sag Harbor, Parsons' force crossed Long Island Sound to attack the Loyalist position. Alerted by spies to the planned assault, Lieutenant Colonel Richard Hewlett strongly fortified the local Presbyterian church, surrounding it with a stockade and earthworks. After Hewlett rejected Parsons' demand to surrender, a brief firefight ensued that did no significant damage. Parsons then withdrew and returned to Connecticut." (Submitted on March 10, 2018.)

2. Frank Melville Memorial Park (Wikipedia). "Sitting adjacent to the park on the East side is the Patriot's Hollow State Forest. It is home to "Patriot's rock", which was once a meeting place of the Setalcott Indians and the site of Reverend Nathaniel Brewster's first sermon. During the Revolutionary war, it was the site of a skirmish with Tory forces garrisoned in the nearby Presbyterian church on August 24, 1772. The property was sold to the Three Village Community Trust in 2010." (Submitted on March 10, 2018.)
Credits. This page was last revised on March 10, 2018. It was originally submitted on March 10, 2018, by Andrew Ruppenstein of Sacramento, California. This page has been viewed 314 times since then and 91 times this year. Photos:   1, 2. submitted on March 10, 2018, by Andrew Ruppenstein of Sacramento, California.
Share this page.