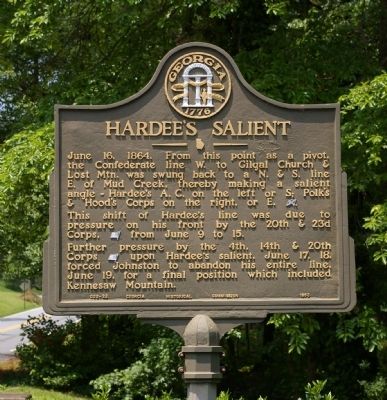 Further pressure by the 4th, 14th & 20th Corps (US) upon Hardee's salient, June 17, 18, forced Johnston to abandon his entire line, June 19, for a final position which included Kennesaw Mountain.

Location. 33° 58.329′ N, 84° 37.023′ W. Marker is near Marietta, Georgia, in Cobb County. Marker is at the intersection of New Salem Road and Salient Road NW, on the right when traveling north on New Salem Road. Touch for map. Marker is in this post office area: Marietta GA 30064, United States of America. Touch for directions.