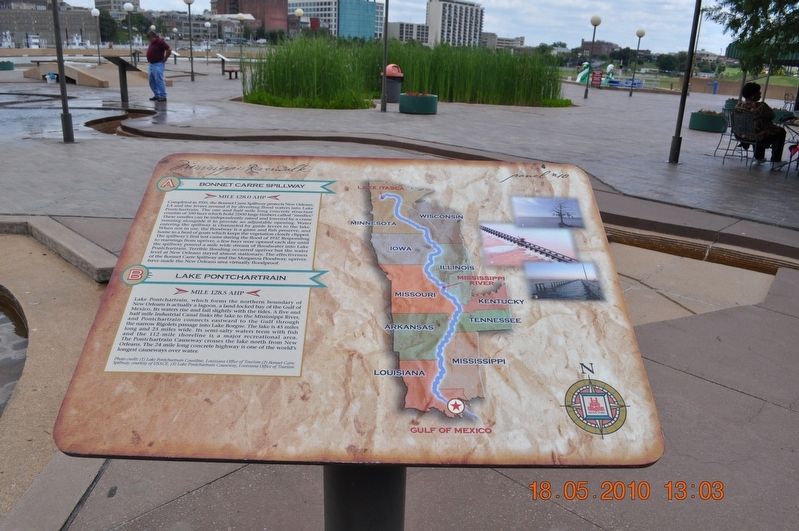 Completed in 1935, the Bonnet Carre Spillway protects New Orleans, LA and the levees around it by diverting flood waters into Lake Pontchartrain. The one and a half mile long concrete structure consist of 350 bays which hold 7,000 large timbers called “needles”. These needles can be independently raised and lowered by a crane running alongside it to provide an adjustable opening. Water entering the spillway is channeled by guide levees to the lake. When not in use, the floodway is a game and fish preserve, and home to a herd of goats which keeps the vegetation closely clipped. The spillway’s first test came during the flood of 1937. Responding to a warning from upriver, a few bays were opened each day until the spillways poured a mile wide stream of floodwater into Lake Pontchartrain. Terrible flooding occurred upriver but the water level at New Orleans stayed almost stationary. The effectiveness of the Bonnet Carre Spillway and the Morganza Floodway, upriver, have made the New Orleans area virtually flood proof.

Lake Pontchartrain, which forms the northern boundary of New Orleans is actually a lagoon, a land-locked bay of the Gulf of Mexico. Its waters rise and fall slightly with the tides. A five and a half mile Industrial Canal links the lake to the Mississippi River, and Pontchartrain connects eastward to the Gulf through the narrow Rigolets passage into Lake Borgne. The lake is 45 miles long and 25 miles wide. Its semi-salty waters teem with fish and the 112-mile shoreline is a major recreational area. The Pontchartrain Causeway crosses the lake north from New Orleans. The 24-mile long concrete highway is one of the world’s longest causeways over water.

Also see . . .
1. Bonnet Carre Spillway. Over the years, the Bonnet Carré Spillway has developed into an extensively used outdoor recreation area with approximately 400,000 visitors enjoying the spillway each year. The public is allowed access provided their activities do not interfere with the operation and maintenance of the project. These lands and waters provide opportunities for fishing, crawfishing, hunting, dog training, camping and wildlife watching. (Submitted on March 12, 2018, by Sandra Hughes of Killen, Alabama, USA.)