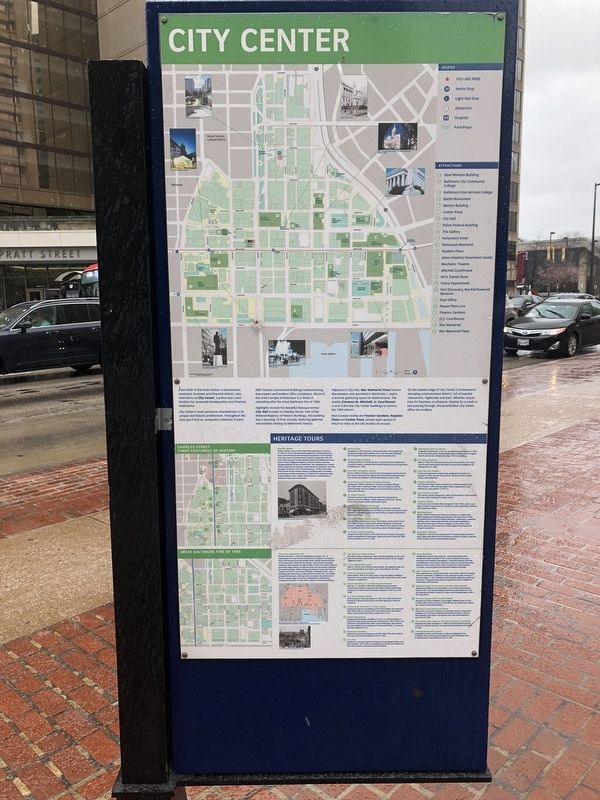 Just north of the Inner Harbor is Downtown's municipal, business and financial district, also referred to as City Center, a prime east coast location for corporate headquarters and financial institutions.

City Center's most pervasive characteristic is its unique historic architecture. Throughout the area you'll find an unequaled collection of early 20th Century commercial buildings nestled among skyscrapers and modern office complexes. Much of this area's unique architecture is a result of rebuilding after the Great Baltimore Fire of 1904.

Highlights include the beautiful Baroque-revival City Hall located on Holliday Street. Part of the National Registry of Historic Buildings, this building has a stunning 10-foot rotunda, featuring galleries and exhibits relating to Baltimore's history.

Adjacent to City Hall, War Memorial Plaza honors Marylanders who perished in World War I, and is a favorite gathering space for Baltimoreans. The nearby Clarence M. Mitchell, Jr. Courthouse is one of the few City Center buildings to survive the 1904 inferno.

Also located nearby are Preston 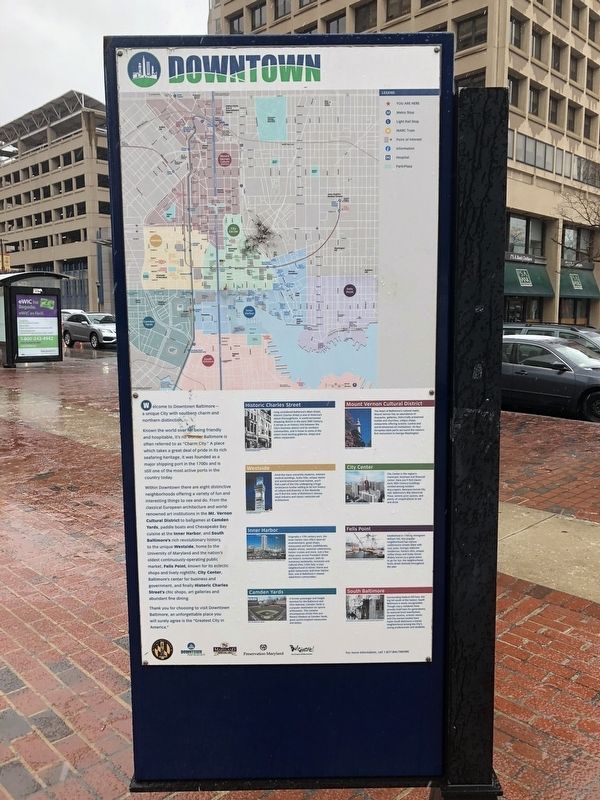 Click or scan to see
this page online
Gardens, Hopkins Plaza and Center Plaza, serene open spaces in which to relax as the City bustles all around.

On the eastern edge of City Center is Downtown's emerging entertainment district, full of popular restaurants, nightclubs and bars. Whether you're here for business or pleasure, staying for a week or just passing through, the possibilities City Center offers are endless.

Charles Street
Charles Street is one of the oldest thoroughfares in America. In 1729, an Act by the Maryland Legislature created Baltimore Town "around and about the house occupied by John Fleming" (now the corner of Lombard and Charles). During the 19th and early 20th centuries Charles Street evolved into Baltimore's best-known artery. Religious freedom, arts and culture, and "the shopping district de luxe of Baltimore" are celebrated by Charles Street's splendid architecture. Spanning three centuries, from the Georgian symmetry of St. Paul's Rectory (1790) to the sleek office tower of One Charles Center, a defining work of modern architecture and the centerpiece of Baltimore's ambitious urban renewal efforts of the 1960s, Charles Street is emblematic of Baltimore City's past and present.

1 Hansa House
Designed in 1907 by Parker, Thomas and Rice, this English half-timbered cottage style building (it is 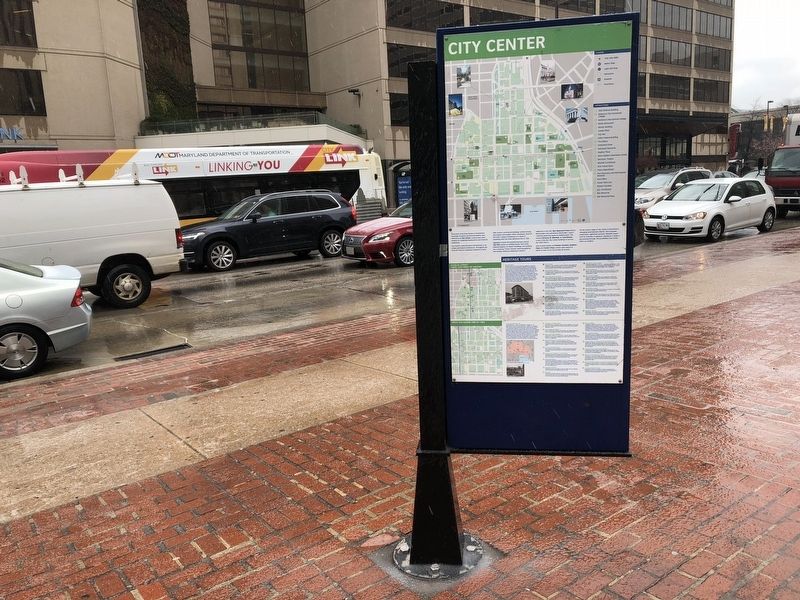 2 World Relief Building
Architects Parker, Thomas and Rice, inspired by Erechteneum in ancient Greece, designed this marble temple for the Savings Bank of Baltimore in 1905.

3 One East Lexington Street
Built in 1890 by Charles Carson in the Romanesque-revival style for the Central Savings Bank, legend has it that this building checked the northward progress of the Great Baltimore Fire of 1904.

4 Tremont Grand, former Masonic Temple
Designed in 1869 by Edmund G. Lind, this building suffered two major fires in 1890 and 1908. The front façade is still the original design with the addition of a Second Empire style roof and a new entrance.

5 St. Paul's Church
The fourth church built at this site after the fire detroyed the previous church building in 1854, designed by Richard Upjohn in the then-popular Italian Renaissance style. 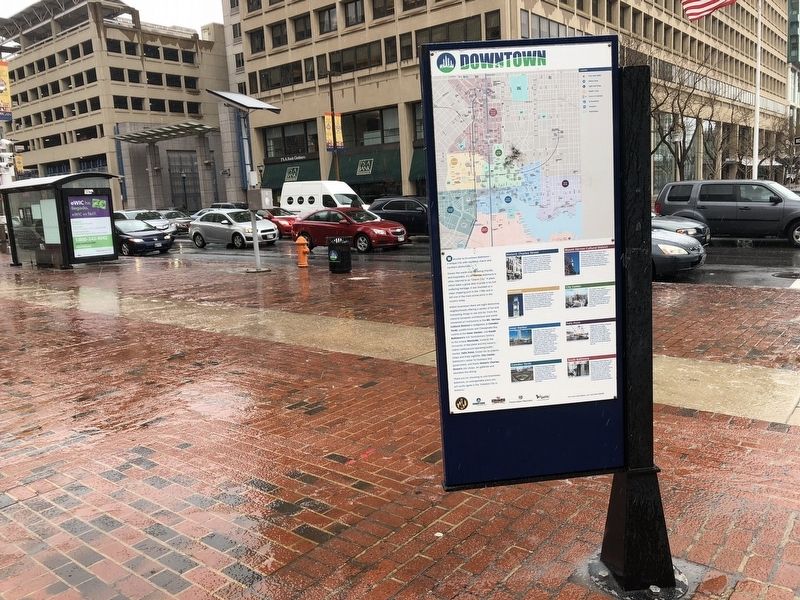 Photographed By Devry Becker Jones, March 20, 2018
4. City Center Marker
Century, renowned for its fine shopping. The marble façades, designed by Simonson and Pietsch, were added to these two buildings in the 1920s to provide a touch of Italian elegance.

8 Carrollton Bank Building
Designed by Alfred aylor in the Classical-revival style, the elegant façade exemplefies the optimistic, expansive mood in the City after the Great Baltimore Fire of 1904.

9 300 North Charles Street
Originally designed as a Y.M.C.A. by Niernsee and Neilson in 1873, this heavily decorated Romanesque style building had its original towers and turrets removed during a 1907 remodeling.

10 St. Paul's Rectory
Built in 1789, this was the home for all of the rectors of St. Paul's church until Preservation Maryland restored the building for its headquarters in 1980.

11 Two Charles Center
These two apartment towers were designed by Conklin and Rossant in 1962, and are the northern anchors for the Charles Center redevelopment.

12 Fidelity Building
The first eight floors were designed by architects Baldwin and Pennington in 1894, and the upper floors, supported by iron framework, were added in 1912-15.

13 One Charles Center
This 24-story tower designed by Mies van der Rohe in 1962 was the first new office building in Charles Center.

15 B&O Building
Built in 1906 by Parker and Thomas Architects, to replace the B&O headquarters building destroeyd by the Great Fire of 1904, its opulent interior boasts marble stairways, stained glass windows with the seals of Maryland and Ohio and crystal chandeliers. Above the entryway is a 20-ton sculpture of two heroic male figures, Mercury and Commerce, whose right hand drapes over a steam locomotive.

16 Mechanic Theatre
Designed in 1962 by John Johansen, its "functional expressionism" style, where the exterior form reflects the interior function, was part of the Charles Center redevelopment project.

The Great Baltimore Fire of 1904

The Great Baltimore Fire Sunday February 7, 1904, the firefighters at Engine Co. 15 responded to an alarm at the John Hurst & Company on Hopkins Place and German (now Redwood) Street. Within minutes the fire in the basement rolled into the elevator shaft and the resulting explosion was powerful enough to blow off the roof, break windows and throw large embers across the street into the broken windows of several buildings. Before being contained 31 hours later the fire claimed 140 acres, more than 70 blocks of Baltimore City. 1,526 buildings were destroyed, 2,500 business burned out, and 35,000 people left homeless, although only one death was attributed to the fire. Today's legacy from the conflagration is Baltimore's unequaled collection of early 20th century commercial buildings.

1 100 block of Water Street
The 20th Century warehouse style of all buildings on the north side of this street reflects the waterfront boundary of the original "Baltimore Town."

2 7 East Redwood Street
Built in 1920 for the Citizens National Bank, this dignified high rise has a main banking room that is one of the finest in the City.

3 Bank of America Building
When built in 1929 in Art Deco style, it was the tallest building in Baltimore. Its two-story banking room with mosaic floors and marble columns is magnificent.

4 Macht Building (11-13 East Fayette Street)
Built by A.L. Forrest in 1908, this building boasts beautiful architectural details. It has been the home of the Macht Real Estate Company, the first Jewish real estate company in the City, since 1908.

6 Clarence M. Mitchell, Jr. Court House
Designed by Wyatt and Nolting in the French Beaux Arts style and built 1890-1900, it survived the Great Baltimore Fire and stand where courthouses have been located since 1767.

7 Battle Monument
Designed by Maximillian Godefroy in 1814, in the commemoration of those who died during the defense of Baltimore in 1814, this is one of the two monuments (the other is the Washington Monument) that led to Baltimore's sobriquet of "Monumental City." It survived the Great Baltimore Fire.

8 Equitable Building
Designed by Carson and Sperry and built 1889-1894, this building also survived the Great Baltimore Fire of 1904.

9 City Hall
Designed by George Frederick in the grand and elegant Beaux Arts style and built 1867-1875, the building survived the Great Baltimore Fire with its grand rotunda and marble finishes.

10 Peale Building
Designed by Robert Cary Long, Sr., commissioned by artist Rembrandt Peale and built in 1814, this was the first museum building in the Western Hemisphere. It was also used as City Hall and Baltimore's first African American school It survived the Great Baltimore Fire and for many years it housed the Peal Museum collection, now located at the Maryland Historical Society.

11 Zion Lutheran Church
The original church, facing Gay Street, was built in 1807 for the large German community in Baltimore and continues to hold services in German today. In 1913 Theodore Wells Pietsch added the parish hall and tower. The garden has become a gentle lunchtime respite for overworked civil servants.

12 National Bank of Commerce (24-28 South Street)
Designed by Baldwin and Pennington in the French Renaissance style in 1901, this small building survived the Great Baltimore Fire and reflects the bank's need for a large, well-lit banking space with a few side offices.

13 Furness House (19-21 South Street)
Designed by Edward Glidden in the English Palladian style for the Furness Withy and Company of Great Britain, its architecture reflects the culture of its British builders.

14 200 block East Redwood Street
This block is an intact collection of early 20th Century commercial architecture in the heart of Baltimore's financial district. Most of the buildings were built in the decade after the Great Baltimore Fire of 1904.

15 Mercantile Safe Deposit and Trust Company Building
Designed by Wyatt and Sperry in 1885 in the Romanesque Revival style, the building's exterior survived the Great Baltimore Fire of 1904.

16 135 East Baltimore Street
Designed by Parker and Thomas in 1900 as headquarters for Alexander Brown, the venerable Baltimore stock brokerage firm, it withstood the Great Baltimore Fire of 1904.

Known the world over for being friendly and hospitable, its's no wonder Baltimore is often referred to as "Charm City." A place which takes a great deal of pride in its rich seafaring heritage, it was founded as a major shipping port in the 1700s and is still one of the most active ports in the country today.

Camden Yards
A former passenger and freight terminal for the Baltimore and Ohio Railroad, Camden Yards is a popular destination for sports enthusiasts. The complex emcompasses Oriole Park and Ravens Stadium at Camden Yards, great sports-inspired restaurants and shops.

South Baltimore
Surrounding Federal Hill Park, the big hill south of the harbor, South Baltimore is easily recognizable. Though many residents have proudely lived here for generations, its restored brick townhomes, popular taverns, eclectic stores and City-owned market have made South Baltimore a trendy neighborhood among the City's young professionals and students.

Topics and series. This historical marker is listed in these topic lists: Architecture • Churches & Religion • Disasters • Industry & Commerce. In addition, it is included in the Art Deco series list. A significant historical year for this entry is 1904.