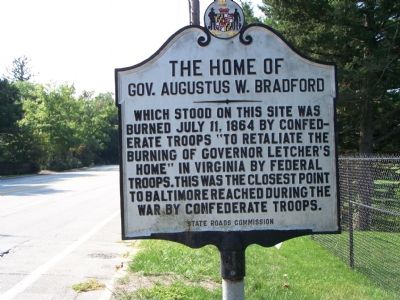 By William Pfingsten, September 3, 2007
1. The Home of Governor Augustus W. Bradford Marker
Inscription.
The home of Governor Augustus W. Bradford, which stood on this site was burned July 11, 1864 by Confederate Troops “to retaliate the burning of Governor Letcher’s Home” in Virginia by Federal troops. This was the closest point to Baltimore reached during the war by Confederate Troops. . This historical marker was erected in 1934 by State Roads Commission. It is in Towson in Baltimore County Maryland

Location. 39° 22.443′ N, 76° 37.598′ W. Marker is in Towson, Maryland, in Baltimore County. Marker is at the intersection of Charles Street (Route 139) and Charlesbrook Road, on the right when traveling south on Charles Street. Touch for map. Marker is in this post office area: Towson MD 21204, United States of America. Touch for directions. 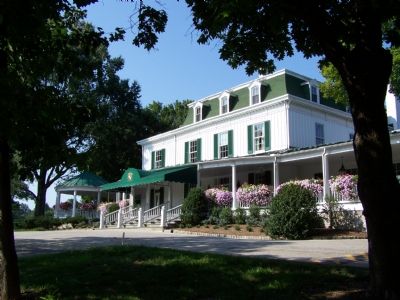