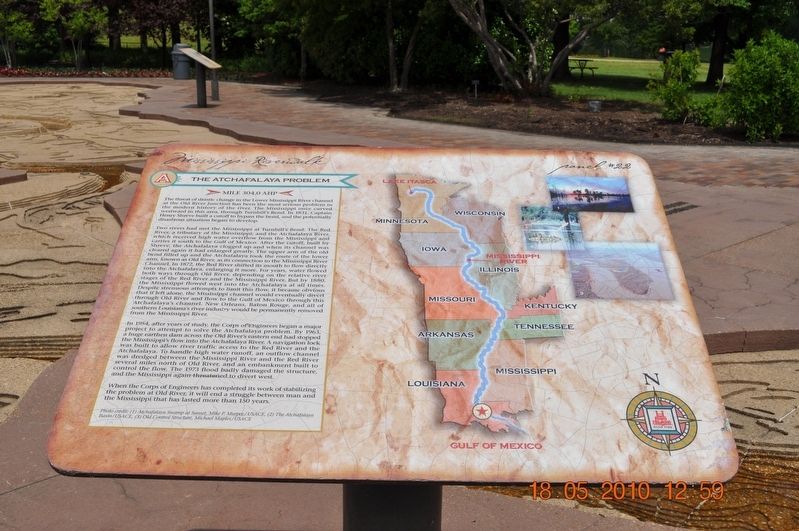 The Threat of drastic change in the Lower Mississippi River channel at the Old River Junction has been the most serious problem in the modern history of the river. The Mississippi once curved westward in this area through Turnbill’s Bend. In 1831, Captain Henry Shreve built a cutoff to bypass the bend, and the potentially disastrous situation began to develop

Click or scan to see
this page online
flowed west into the Atchafalaya at all times. Despite strenuous attempts to limit this flow, it became obvious that if left alone, the Mississippi channel would eventually divert through Old River and flow to the Gulf of Mexico through this Atchafalaya’s channel. New Orleans, Baton Rouge, and all of southern Louisiana’s river industry would be permanently removed from the Mississippi River.

In 1954, after years of study, the Corps of Engineers began a major project to attempt to solve the Atchafalaya problem. By 1963, a huge earthen dam across the Old River’s eastern end had stopped the Mississippi’s flow into the Atchafalaya River. A navigation lock was built to allow river traffic access to the Red River and the Atchafalaya. To handle high water runoff and outflow channel was dredged between the Mississippi River and the Red River several miles north of Old River, and an embankment built to control the flow. The 1973 flood badly damaged the structures and the Mississippi again threatened to divert west.

When the Corps of Engineers has consulted its work on stabilizing the problem at Old River, it will end a struggle between man and the Mississippi that has lasted more than 150 years.
Photo Credit: (1) Atchafalaya Swamp at Sunset, Mike P. Murphy/USACEM (2)The Atchafalaya Basin/USACE, (3) Control Structure, Michael Maples/USACE (Marker Number 22.)

Topics. This historical marker is listed in these topic lists: Disasters • Waterways & Vessels. A significant historical year for this entry is 1831.