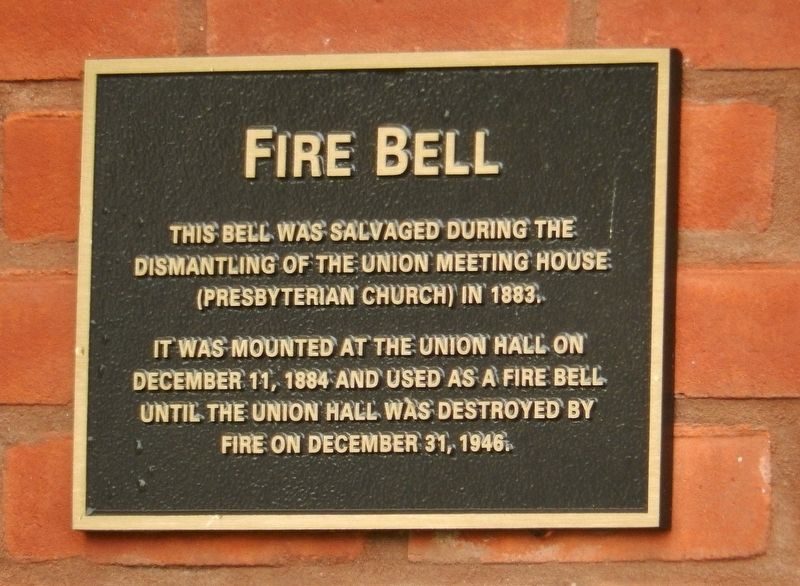 By Cosmos Mariner, July 13, 2017
1. Fire Bell Marker
Inscription.
Fire Bell. . . This bell was salvaged during the dismantling of the Union Meeting House (Presbyterian Church) in 1883. . . It was mounted at the Union Hall on December 11, 1884 and used as a fire bell until the Union Hall was destroyed by fire on December 31, 1946. . This historical marker is in DeRuyter in Madison County New York

This bell was salvaged during the dismantling of the Union Meeting House (Presbyterian Church) in 1883.

Location. 42° 45.537′ N, 75° 53.064′ W. Marker is in DeRuyter, New York, in Madison County. Marker is on Utica Street (New York State Route 13) south of Water Street, on the right when traveling south. Marker is located on the front grounds of the Genevieve Staley Civic Center building, (former DeRuyter High School), beside the front sidewalk. Touch for map. Marker is at or near this postal address: 735 Utica Street, De Ruyter NY 13052, United States of America. Touch for directions.

Other nearby markers. At least 8 other markers are within 9 miles of this marker, measured as the crow flies. Seventh Day Baptist Church (approx. 0.2 miles away); Deruyter Dam (approx. 4.8 miles away); Smith Tavern (approx. 6.3 miles away); New Woodstock War Memorial 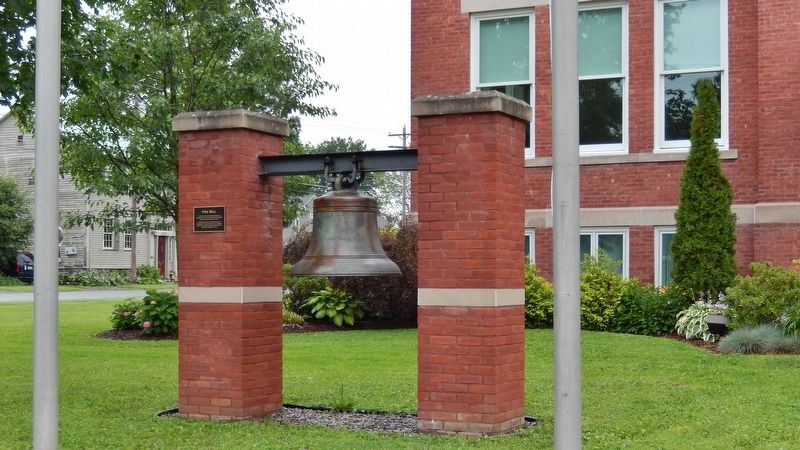 More about this marker. Marker is a metal plaque mounted at eye-level on a large, 2-column, brick stand built to support and display the fire bell.

Also see . . .
1. DeRuyter Union Hall.
(This link presents before-and-after-the-fire photographs of the DeRuyter Union Hall. The tower and bell are visible in the "before" photograph.)
Built in 1855, DeRuyter’s Union Hall was used as a meeting place and live performance venue, also served as the town’s movie theater, regularly showing films from the early days of silents up until its destruction by fire on December 31, 1946. (Submitted on April 25, 2018, by Cosmos Mariner of Cape Canaveral, Florida.)

2. DeRuyter Creates Civic Center.
Out front, on Utica Street, two brick mounts carry the bell that rang in the village’s Union Hall, which burned in December 1946. The bell was found in storage in 1984. (Submitted on April 25, 2018, by Cosmos Mariner of Cape Canaveral, Florida.) 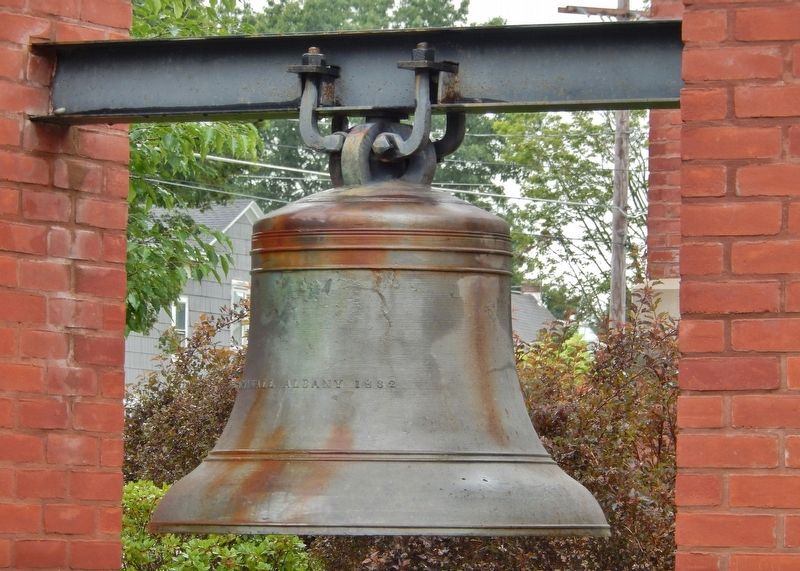 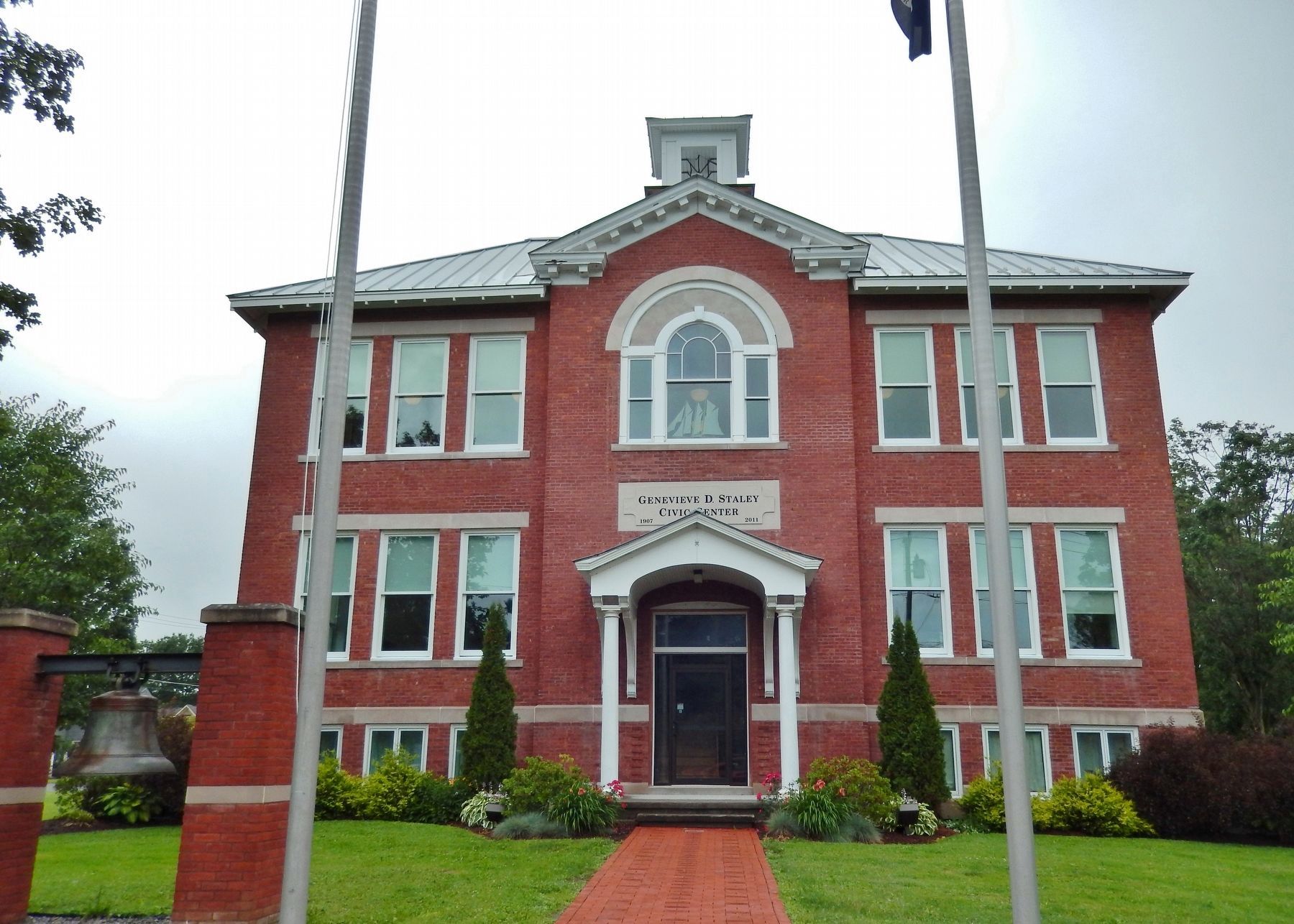