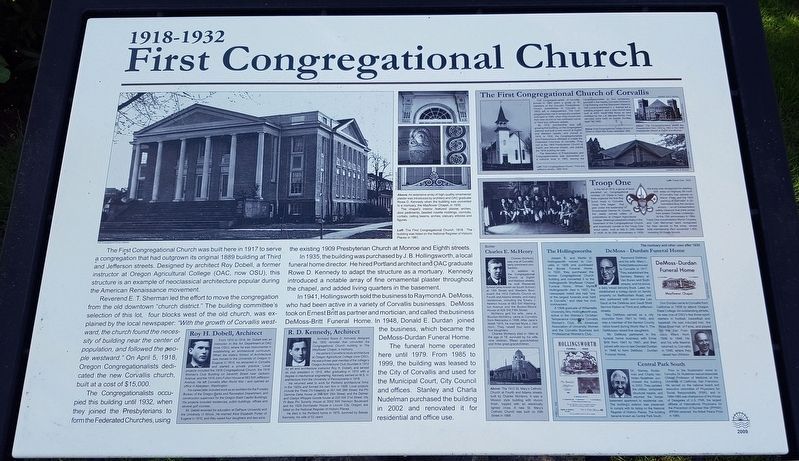 The First Congregational Church was built here in 1917 to serve a congregation that had outgrown its original 1889 building at Third and Jefferson streets. Designed by architect Roy Dobell, a former instructor at Oregon Agricultural College (OAC, now OSU), this structure is an example of neoclassical architecture popular during the American Renaissance movement.

Reverend E. T. Sherman led the effort to move the congregation from the old downtown “church district.” The building committee's selection of this lot, four blocks west of the old church, was explained by the local newspaper: “With the growth of Corvallis westward, the church found the necessity of building near the center of population, and followed the people westward.” On April 5, 1918, Oregon Congregationalists dedicated the new Corvallis church, built at a cost of $15,000.

The Congregationalists occupied this building until 1932, when they joined the Presbyterians to form the Federated Churches, using the existing 1909 Presbyterian Church at Monroe and Eighth streets.

In 1935, the building was purchased by J. B. Hollingsworth, a local funeral 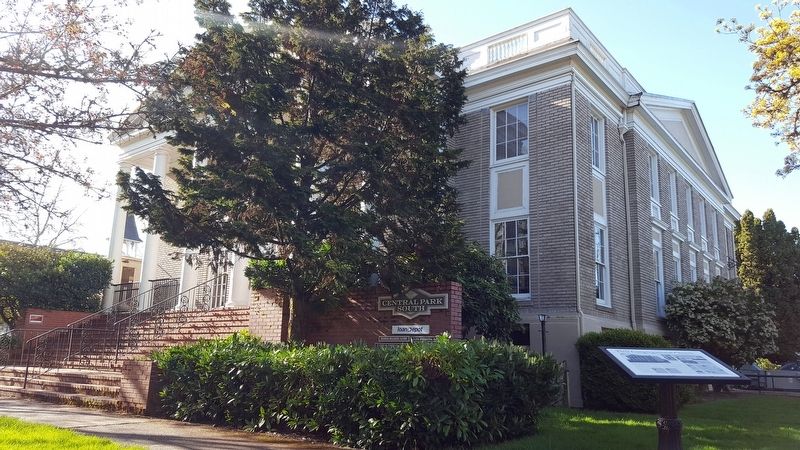 Click or scan to see
this page online
home director. He hired Portland architect and OAC graduate Rowe D. Kennedy to adapt the structure as a mortuary. Kennedy introduced a notable array of fine ornamental plaster throughout the chapel, and added living quarters in the basement.

In 1941, Hollingsworth sold the business to Raymond A DeMoss, who had been active in a variety of Corvallis businesses. DeMoss took on Ernest Britt as partner and mortician, and called the business DeMoss-Britt Funeral Home. In 1948, Donald E. Durdan joined the business, which became the Demoss-Durdan Funeral Home.

The funeral home operated here until 1979. From 1985 to 1999, the building was leased to the City of Corvallis and used for the Municipal Court, City Council and offices. Stanley and Charla Nudelman purchased the building in 2002 and renovated it for residential and office use.

Inset
Roy H. Dobell, Architect
From 1910 to 1914, Mr. Dobell was an instructor in the Art Department at OAC (now OSU), where he was instrumental in establishing an architectural curriculum. When the state's School of Architecture was moved to the University of Oregon in Eugene in 1914, he remained in Corvallis and started a private practice. Local projects included the 1918 Congregational Church; the 1916 Woman's Club Building on Seventh Street near Jackson Avenue; and the 1916 John Fulton House at 563 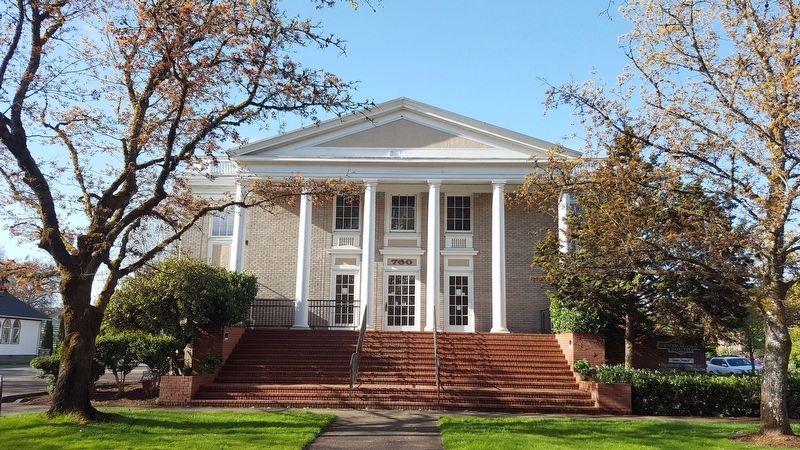 His career later included work as an architect for the Forestry Bureau of the Oregon Park and Recreation Department, and construction supervisor for the Oregon State Capitol Buildings. His projects included residences, public buildings, offices and several golf courses.

Mr. Debell received his education at DePauw University and the University of Illinois. He married Alice Elizabeth Porter of Eugene in 1910, and they raised four daughters and two sons.

He came to Corvallis to study architecture at Oregon Agricultural College (now OSU). He was a three-year member of the college's Oregon Architectural Club (found in 1912 by art and architecture instructor Roy H. Dobell), and served as club president in 1915. After graduating in 1915 with a degree in mechanical engineering, Kennedy earned an M.S. in architecture from the University of Pennsylvania in 1918.

He returned west to work for Portland architectural firms in the 1920s and formed his own firm in 1929. Local projects include the Theta Chi fraternity at 361 NW 26th Street; the Phi Gamma Delta 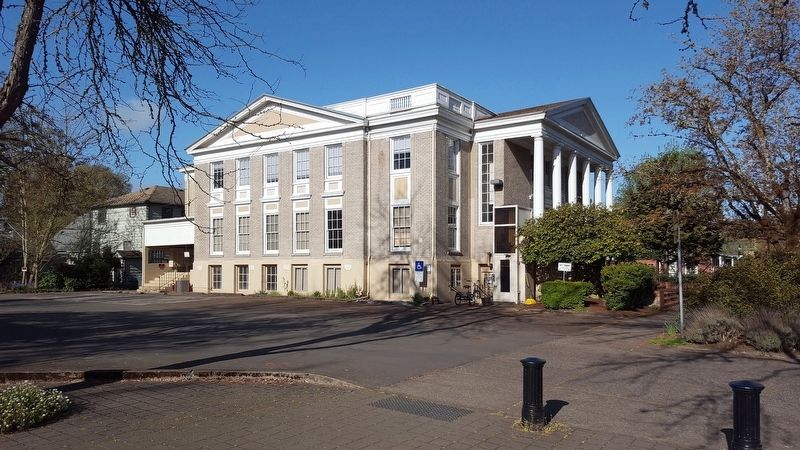 He died in his Portland home in 1975, survived by Bessie Kennedy, his wife of 52 years.

The federation of Presbyterians and Congregationalists was dismantled on a national level in 1963, leaving the Congregationalists to find temporary quarters in the nearby Corvallis Woman's Club building and the downtown Masonic Hall. Local lumberman T. J. Starker led a building program, and a new church was built at 4001 West Hills Road on land donated by the J.A. Hanson family. First services were held on Easter Sunday, April 18, 1965.

Inset
Troop One
In the fall of 1919, a group of boys prevailed on Congregational minister J. P. Clyde to help them organize the first Boy Scout troop in Corvallis. Troop One began that year under the leadership of Scoutmaster Delmer M. Goode, the newly arrived editor of publications at Oregon Agricultural College. Meetings were held initially in the basement of the Congregational Church and eventually moved to the Troop One scout cabin built at 548 S. 20th Street in 1936. At its 20th anniversary in 1939, the troop was recognized for planting 800 trees on Highway 99 north of Corvallis, trail upkeep on Marys Peak; and the 1929 painting of “Corvallis” in 20-foot letters atop the campus armory—an air transportation safety measure that drew praise from aviator Charles Lindburgh. At the 75th anniversary in 1994, Troop One scoutmasters Myron Cropsey and Carl Merryman were recognized for their service to the troop, whose total membership then exceeded 1,000, including 55 Eagle Scouts.

In addition to the Congregational Church at Eighth and Madison streets, he built Roosevelt School (also known as South School) at 13th Street and Western Boulevard; the 1912 Catholic Church on Fourth and Adams streets; and many residences, including the Emery J. Newton house at 663 SW Washington Avenue and the Buxton-Moore House at 626 SW Fifth Street.

McHenry and his wife, Jane A. Boulton McHenry, came to Corvallis from Nebraska in 1898. After Jane's death in 1915, he married Myra J. Van Horn. They raised four sons and five daughters.

Charles McHenry died in 1944 at the age of 78, survived by his wife, nine children, fifteen grandchildren and three great-grandchildren.

A 1909 graduate of Willamette University, Mrs. Hollingsworth was active in the Women's Christian Temperance Union, the Corvallis Woman's Club, the American Association of University Women and the Corvallis Business and Professional Women's Club.

Inset
DeMoss - Durdan Funeral Home
Raymond DeMoss and his wife, Mary L. Holte DeMoss moved to Corvallis in 1917. They established the Sanitary Bakery at Van Buren and Sixth streets, and he drove a daily bread delivery truck. Later, he established a turkey ranch on family property on Bellfountain Road, and also partnered with son-in-law Les Gault at the DeMoss and Gault Shell Service Station at Third and Jefferson streets.

Ray DeMoss served as a city councilor from 1941 to 1945, and was a member of the Benton County ration board during World War II. The DeMosses raised five daughters.

Mr. DeMoss partnered in the funeral home business with Ernie Britt from 1941 to 1947, and then joined with son-in-law Donald Durdan in 1948 to form DeMoss - Durdan Funeral Home.

Don Durdan came to Corvallis from California in 1939 to attend Oregon State College. An outstanding athlete, he was one of OSU's few three-sport starters in football, basketball and baseball. He was inducted into the Rose Bowl Hall of Fame, and played for the San Francisco 49ers from 1946 to 1948. He and his wife Maxine returned to Corvallis in 1948, where they raised two children.

Inset
Central Park South
Dr. Stanley Nudelman and Charla Van Koten-Nudelman purchased the building in 2002. They updated the utilities, completed structural repairs, and returned the former basement apartment to residential use. The building's exterior was preserved to comply with its listing on the National Register of Historic Places. The building became known as Central Park South.

Prior to the Nudelmans' move to Corvallis, Dr. Nudelman was an Associate Clinical Professor of Medicine at the University of California, San Francisco. He served on the national board and executive committee of Physicians for social Responsibility (PSR), and in 1984-1985 was chairperson of the House of Delegates of U.S. PSR, the largest affiliate of International Physicians for the Prevention of Nuclear War (IPPNW). IPPNW received the Nobel Peace Prize in 1985.

Topics. This historical marker is listed in these topic lists: Architecture • Churches & Religion • Industry & Commerce. A significant historical date for this entry is April 5, 1918.