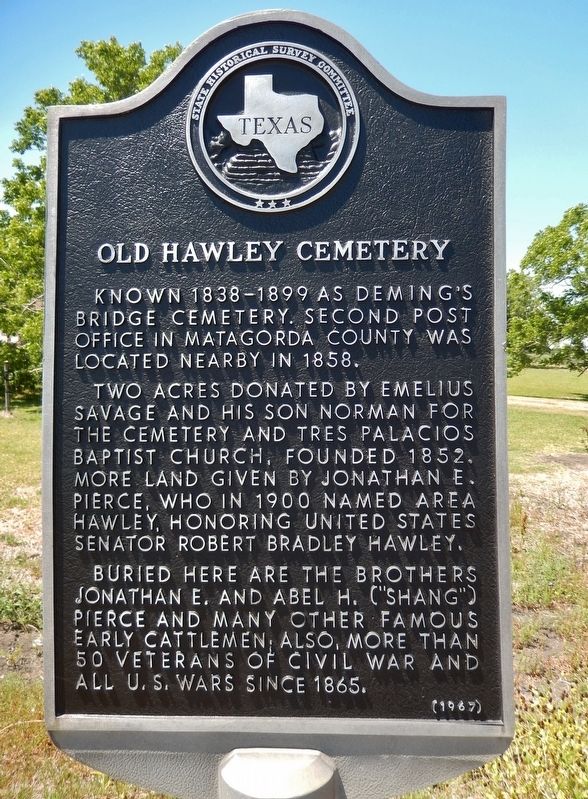 By Cosmos Mariner, May 15, 2018
1. Old Hawley Cemetery Marker
Inscription.
Old Hawley Cemetery. . . Known 1838-1899 as Deming's Bridge Cemetery. Second post office in Matagorda County was located nearby in 1858. . . Two acres donated by Emelius Savage and his son Norman for the cemetery and Tres Palacios Baptist Church, founded 1852. More land given by Jonathan E. Pierce, who in 1900 named area Hawley, honoring United States senator Robert Bradley Hawley. . . Buried here are the brothers Jonathan E. and Abel H. ("Shang") Pierce and many other famous early cattlemen; also, more than 50 veterans of Civil War and all U.S. wars since 1865. . This historical marker was erected in 1967 by Texas State Historical Survey Committee. It is Near Blessing in Matagorda County Texas

Known 1838-1899 as Deming's Bridge Cemetery. Second post office in Matagorda County was located nearby in 1858.

Buried here are the brothers Jonathan E. and Abel H. ("Shang") Pierce and many other famous early cattlemen; also, more than 50 veterans of Civil War and all U.S. wars since 1865. 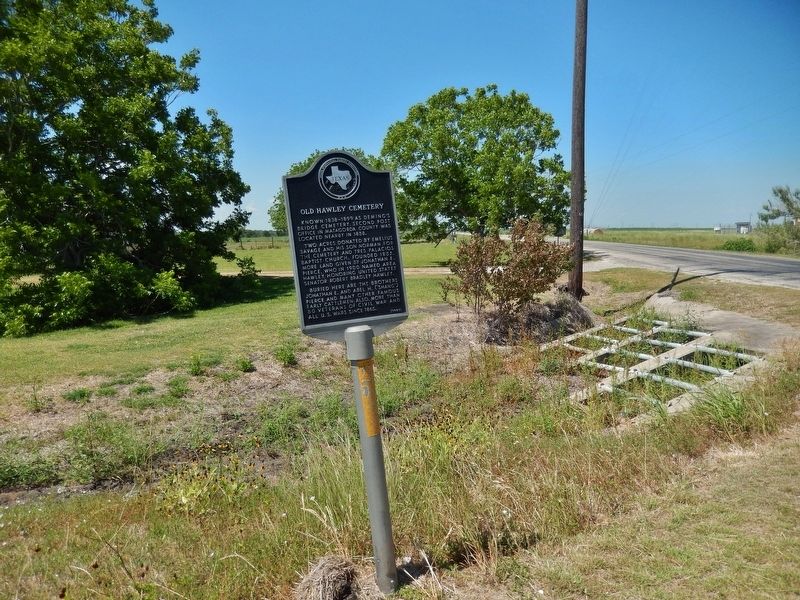 By Cosmos Mariner, May 15, 2018
2. Old Hawley Cemetery Marker (wide view)
35. Marker is located just off the highway, at the northwest corner of the intersection. Touch for map. Marker is in this post office area: Blessing TX 77419, United States of America. Touch for directions.

Also see . . .
1. Hawley Cemetery.
Hawley Cemetery was established in 1854. It is located on Tres Palacios River, two miles east of Blessing. The name Deming’s Bridge originated from the cemetery’s proximity to Deming’s Bridge and was in the churchyard of Tres Palacios Baptist Church. The names of the community and post office were changed from Deming’s Bridge to Hawley by Jonathan Edwards Pierce in 1899. The earliest recorded burial was Sarah Tone October 30, 1857. During the 1930s, during a cleanup effort, a brush fire got out of control and burned the existing wooden markers. 80 oblong concrete markers 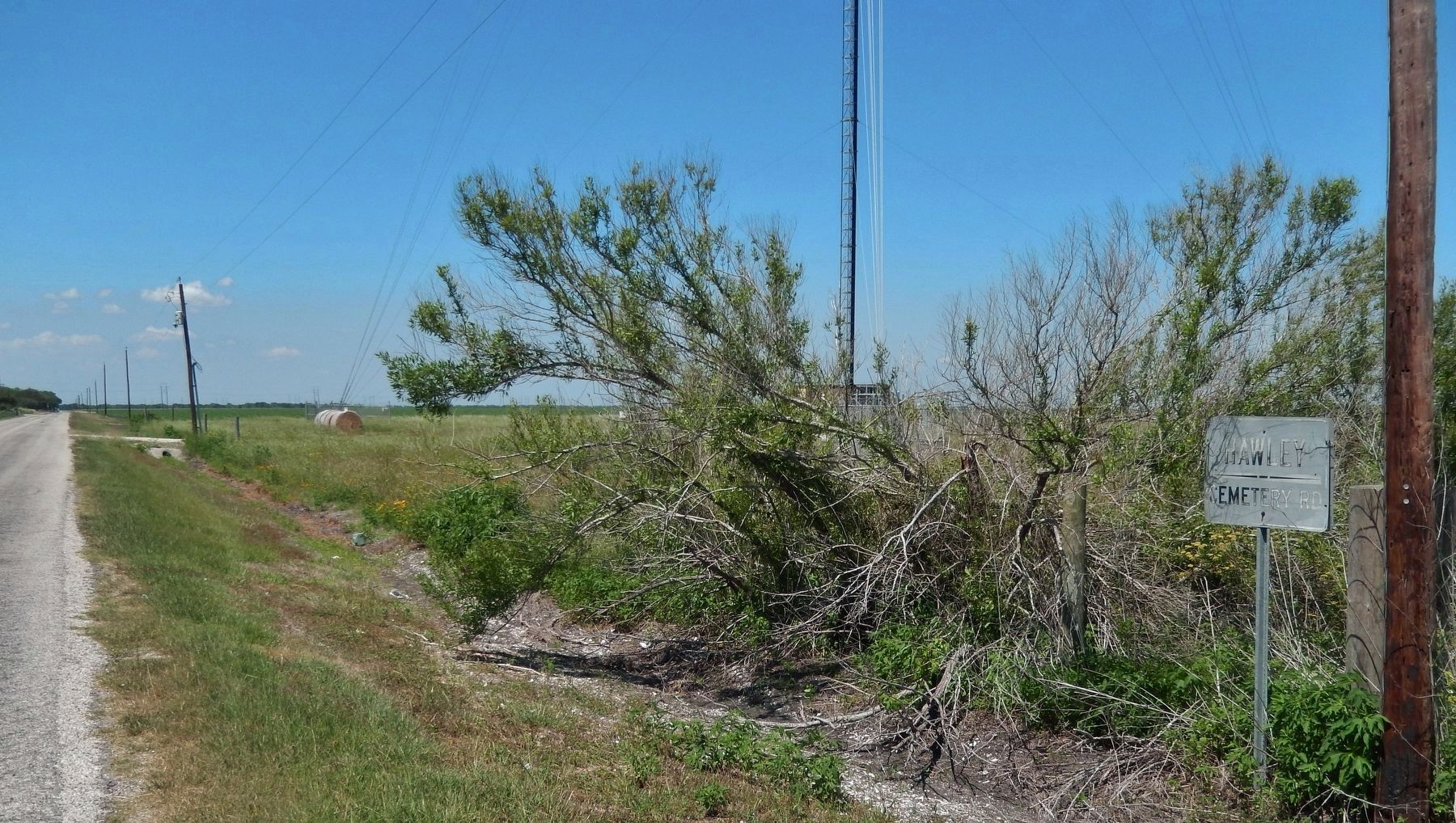 By Cosmos Mariner, May 15, 2018
3. Hawley Cemetery Road (view from near marker; Hawley Cemetery is 1 mile north on this road)
were placed on the graves where the wooden markers were burned and most of the names of those marked with the concrete markers are still unknown. In 2010 there are 1729 known burials and an undetermined number of unknowns. Included in the 1729 burials are seven war casualties 375 veterans and seven Gold Star Mothers. (Submitted on June 7, 2018, by Cosmos Mariner of Cape Canaveral, Florida.)

2. Hawley, Texas (A Texas Ghost Town).
Once known as Deming’s Bridge, after Edwin A. Deming, who constructed a crude bridge over the Tres Palacios River in 1857, the community went unnamed until a post office opened in 1858 – with Deming as postmaster. Abel “Shanghai” Pierce and his brother Jonathan had their ranch headquarters just south of the bridge around the time of the Civil War. By the mid 1880s, Deming’s Bridge had a thriving population of 300 which grew to 500 by the early 1890s. Jonathan Pierce had taken over as postmaster for the town by this time and when his son Abel received an appointment in the Navy, Pierce repaid the kindness of his son’s benefactor by renaming the town in his honor. Robert Bradley Hawley was the namesake, although the local school retained the name of Deming’s Bridge. In 1903 the New York, Texas and Mexican Railway was advancing across the prairie and Jon Pierce donated land to insure the railroad would pass through the region. The town of Blessing appeared that year and Hawley’s post office and Masonic Lodge moved to the new town, cutting Hawley loose to become an eventual ghost town. (Submitted on June 7, 2018, by Cosmos Mariner of Cape Canaveral, Florida.)
Credits. This page was last revised on June 10, 2018. It was originally submitted on June 7, 2018, by Cosmos Mariner of Cape Canaveral, Florida. This page has been viewed 88 times since then and 18 times this year. Photos:   1, 2, 3. submitted on June 7, 2018, by Cosmos Mariner of Cape Canaveral, Florida. • Andrew Ruppenstein was the editor who published this page.
Share This Page.