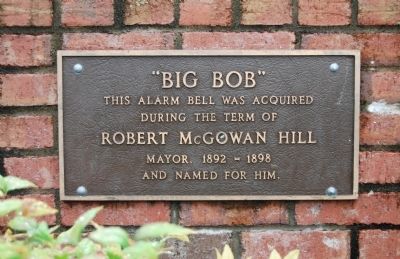 By Brian Scott, September 27, 2008
1. "Big Bob" Marker
Inscription.
"Big Bob". .
This Alarm Bell Was Acquired During The Term Of Robert McGowan Hill Mayor, 1892 - 1898 And Named For Him.. . This historical marker was erected by Harry Wilkins Chandler, Sr.. It is in Abbeville in Abbeville County South Carolina

This Alarm Bell Was Acquired
During The Term Of
Robert McGowan Hill
Mayor, 1892 - 1898
And Named For Him.

Topics. This historical marker is listed in this topic list: Government & Politics. A significant historical year for this entry is 1892. 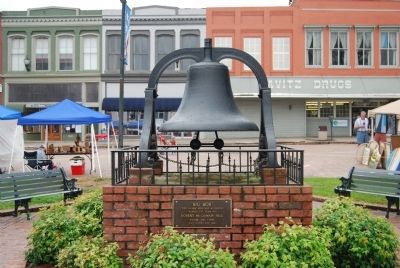 Regarding "Big Bob". The bell is stamped with "C.S. Bell & Co, Hillsboro O" making it cast between 1882 and 1894 when the company was in a partnership.

The placement of the bell is largely due to the work of the late Harry Wilkins Chandler, Sr., who passed away January 13, 2008 at the age of 80. Chandler served Abbeville in many ways. He ran a funeral home for over 60 years and served on many boards and councils. It was during the 1990s that he led the revitalization program which resulted in Abbeville's award-winning downtown.

Also see . . .  The Bell Foundry. Charles S. Bell, native of Cumberland, Md., was apprenticed to the founder’s trade in Pittsburgh, Pa. at the age of fifteen. 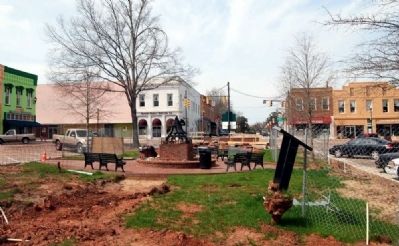 In an 1884 index of Abbeville citizens, Hill's occupation was listed as "general merchandise." During his term as mayor, the office was held for two years. Hill served five terms as mayor (known at the time as intendent). 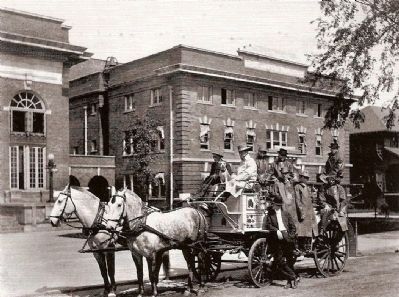 Abbeville County by the Abbeville County Historical Society, 1915
4. Abbeville Fire Department
In Front of the Abbeville Opera House
"Big Bob" can be seen at the top left of the opera house, directly above the head of the foreground horse.
2. What is an Intendant?
Originally used as a title in France, intendants were common in South Carolina during much of the 1800 and early 1900s. Intendants were directly elected public officials that were responsible for the administrative duties of cities, towns, and villages. They were assisted in their duties by elected wardens. The modern titular equivalent to the two titles would be mayor and council member, respectively.
— Submitted November 7, 2009, by Brian Scott of Anderson, South Carolina.
3. Harry Wilkins Chandler, Sr. Obituary
The Greenville News
January 15, 2008

Born in Abbeville County, S.C., he was a son of the late Caleb Wilkins and Annie Greene Mabry Chandler. He is survived by his wife of the home; son, Harry Wilkins Chandler, Jr. (Kin) and his wife, Mandy Ashcraft Chandler of Due West; daughter, Anne Chandler of Abbeville; grandson, Caleb Wilkins Chandler; granddaughter, Halle Elizabeth Chandler, both of Due West and special friends, Beth Rabb Madden and family and Gaynelle and Richard Rabb of Greenville. He was preceded in death by his parents; brother, 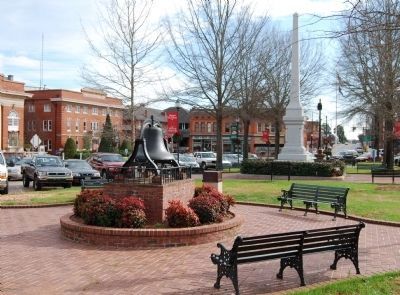 Harry had a deep and committed passion for his profession. He was a dedicated, compassionate, caring funeral director having served families of Abbeville County for over 60 years. For 34 years, he and his late brother co-owned a funeral home. Since 2001, he joined hands with Steve A. Jackson in forming the Chandler-Jackson Funeral Home and has been a licensed Funeral Director for over 60 years. He and his brother offered free ambulance service to the citizens of Abbeville for many years until EMS was established.

Harry was actively engaged in civic, charitable and beautification activities through the years and much of the citizens of Abbeville and tourist who come to Abbeville enjoy today what was brought about by Harry.

He was appointed to the first Historic Preservation Commission in Abbeville and also to the first Zoning and Planning Commission. Before a city Beautification Committee was formed by City Council, he bought, 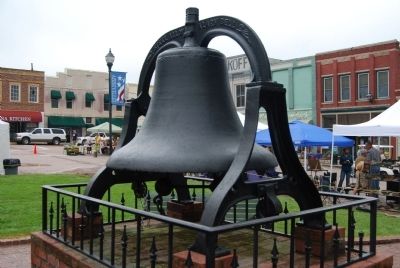 By Brian Scott, September 27, 2008
6. "Big Bob"
Looking North Along Court Square
planted and tended flowers around the city. When City Council formed a City Beautification Committee, he was appointed Chairman and served for many years. Later when the Governor's Beautification Community Improvement was formed for each county in the State, he became Abbeville's first Chairman. During these years, much was accomplished in the city and county in areas of beautification, conservation, education, recreation, community development, historical preservation and litter awareness. Abbeville County won the Governor's Trophy in 1993 - for Class II under his chairmanship.

He served on the City Election Committee for years. For over 40 years, he served as a Board Member of Long Cane Cemetery Association, serving as Vice-Chairman. He served many years on the Board of Advisers for the S.C. National Bank (now First Citizens). He has served since 1976 on the Abbeville County Museum Board serving as Treasurer. For almost 20 years, Harry served as City Representative on the Abbeville County Memorial Hospital Board, serving as Chairman and Secretary of the Board. Upon his retirement from the Board, he was presented a plaque and resolution in "grateful appreciation for his outstanding and dedicated service, years of commitment and his help in assuring its continued success".

The Union cannon, situated on the island in front of the Burt-Stark Mansion, was restored 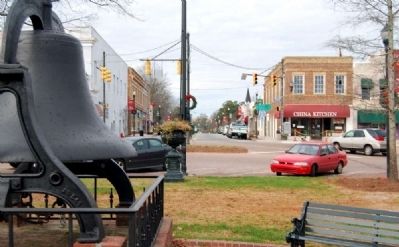 By Brian Scott, December 23, 2008
7. "Big Bob"
Looking North Along Court Square
by authentic specifications he offered from Gettysburg. The monument there was surrounded by blooming flowers planted and maintained by Harry.

Brick walkways and benches were added to the plaza and flowers always planted around the monument. He designed and hand made the fleur-de-lis flower baskets hanging around the square. He was able to help untold numbers of out-of-town residents find the burial site of their ancestors in Abbeville County cemeteries. In 2001, Harry was the recipient of the Abbeville County Chamber of Commerce Hall of Fame award.

Funeral services will be conducted Tuesday, January 15, 2008, at 3 p.m. at the Abbeville Presbyterian Church. The family will receive friends from 1 to 2:30 P.M. in the Telford Parlor of the Church prior to services. Rev. Dr. Michael Bush, Dr. George Wilson and Dr. Randy Ruble will conduct the service. Burial will be in Long Cane Cemetery with Military Rites. 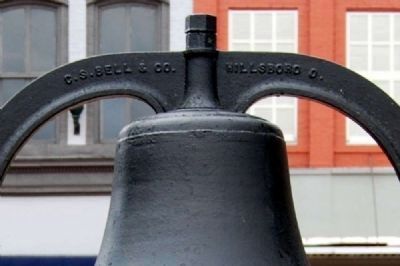 Flowers are accepted or memorials may be made to the Abbeville Area Medical Center, P.O. Box 887, Abbeville, SC 29620, Abbeville Presbyterian Church, P.O. Box 733, Abbeville, SC or to the charity of your choice. The Chandler-Jackson Funeral Home, Abbeville SC is in charge of arrangements.
— Submitted December 27, 2010, by Brian Scott of Anderson, South Carolina. 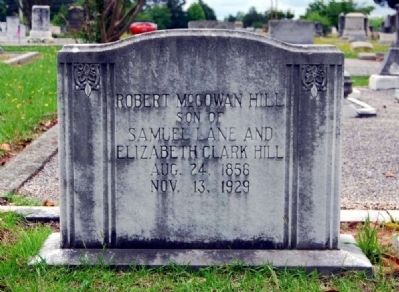 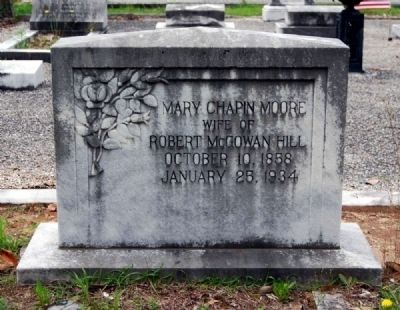 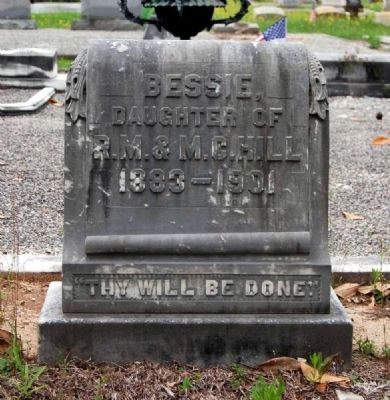 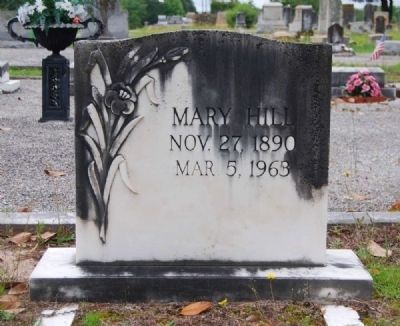 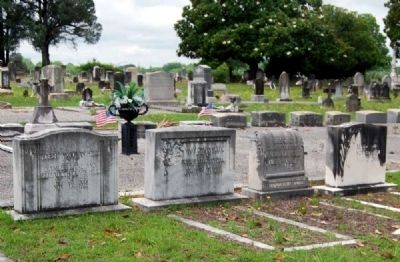