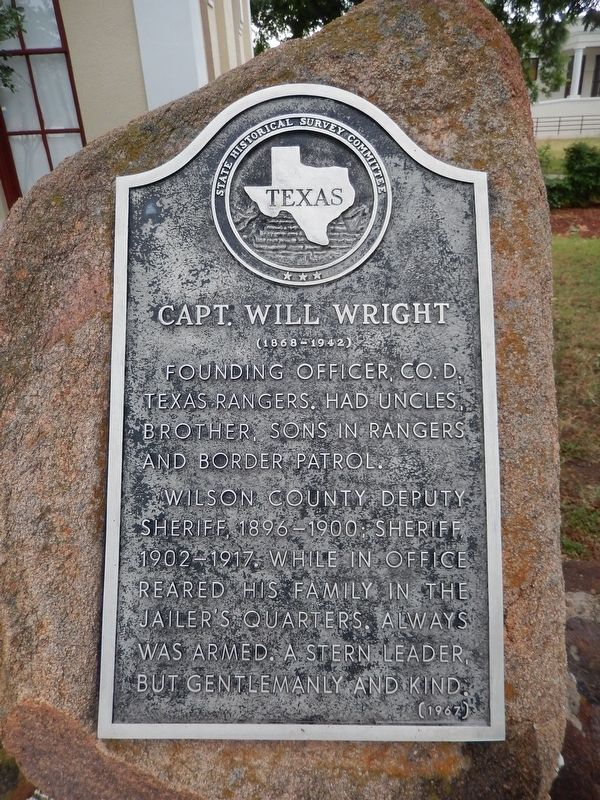 Photographed By Cosmos Mariner, May 20, 2018
1. Captain Will Wright Marker
Inscription.
Captain Will Wright. , Founding officer, Co. D, Texas Rangers. Had uncles, brother, sons in Rangers and Border Patrol. , Wilson County deputy sheriff, 1896-1900; sheriff, 1902-1917. While in office reared his family in the jailer's quarters. Always was armed. A stern leader, but gentlemanly and kind. . This historical marker was erected in 1967 by State Historical Survey Committee. It is in Floresville in Wilson County Texas

Wilson County deputy sheriff, 1896-1900; sheriff, 1902-1917. While in office reared his family in the jailer's quarters. Always was armed. A stern leader, but gentlemanly and kind.

Location. 29° 8.027′ N, 98° 9.445′ W. Marker is in Floresville, Texas, in Wilson County. Marker is on C Street east of 3rd Street, on the right when traveling east. Marker is located on the grounds of the Wilson County Jailhouse Museum, near the northwest corner of the building. Touch for map. Marker is at or near this postal address: 1140 C Street, Floresville TX 78114, United States of America. Touch for directions. 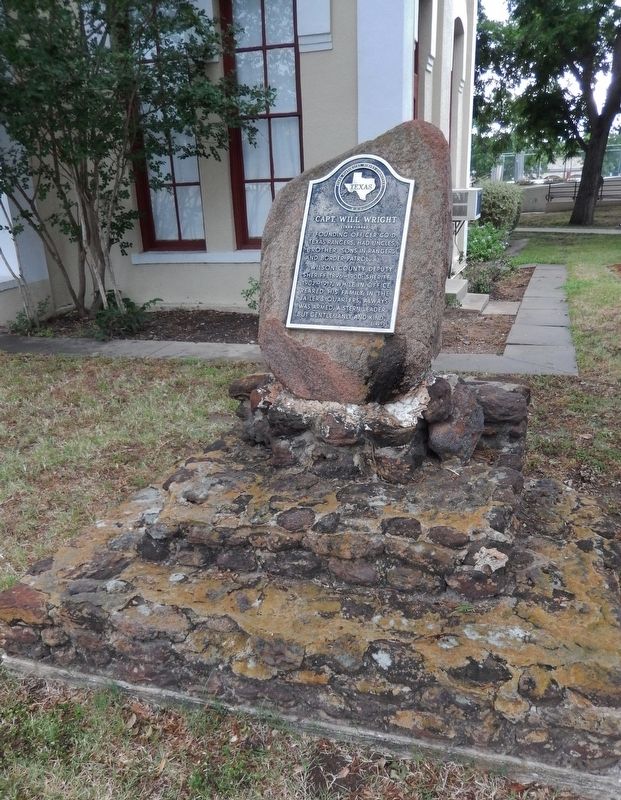 More about this marker. Marker is a large metal plaque, mounted on a large boulder, and surrounded by a terraced-stone planter.

Regarding Captain Will Wright. In 1917 Governor William P. Hobby appointed Will Wright to the position of Texas Ranger Captain and he was assigned to form a new company. When Will Wright became a ranger captain, there was much unrest along the Rio Grand River. Raiders from across the border were wreaking havoc on U. S. citizens. There was much trouble from one end of the Rio Grande to the other. Will Wright was known to take part in many battles. He was called “El Capitan Diablo” (the devil captain). The rangers under his command guarded the border during WWI. They chased liquor smugglers and raiders. Wright was known to be a law enforcer and at the same time, a peace maker. (Submitted on June 12, 2018, by Cosmos Mariner of Cape Canaveral, 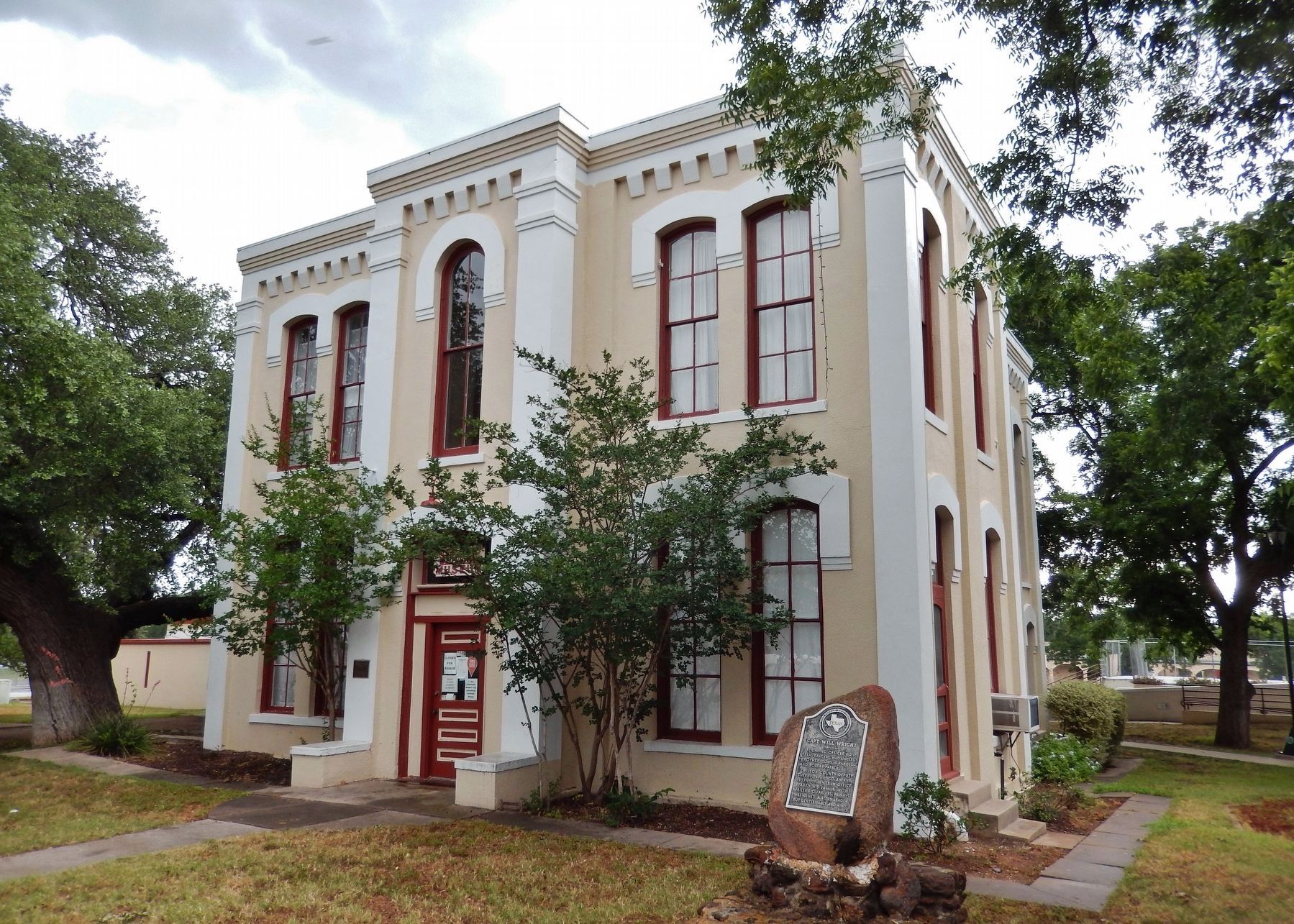 Related markers. Click here for a list of markers that are related to this marker. Wilson County Texas Courthouse & Jail

Also see . . .  Captain Wright, a Gallant Texas Ranger. Frontier Times magazine:
Since his appointment as captain of Rangers, Capt. Wright and his company have had eight battles with Mexican smugglers and bootleggers, and while most of these running battles were at close range, neither the Ranger commander nor any of his men have been wounded or killed. In November, 1921, in five days Capt. Wright and his company captured a total of 4,200 quarts of Mexican liquors and 63 pack horses, while several of the Mexican smugglers and bootleggers were killed and a number wounded. (Submitted on June 12, 2018, by Cosmos Mariner of Cape Canaveral, Florida.) 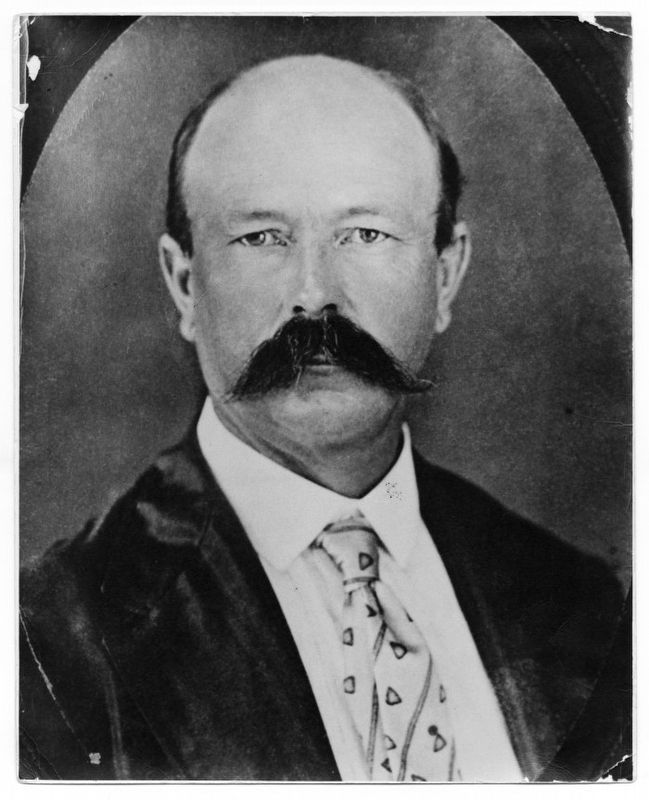