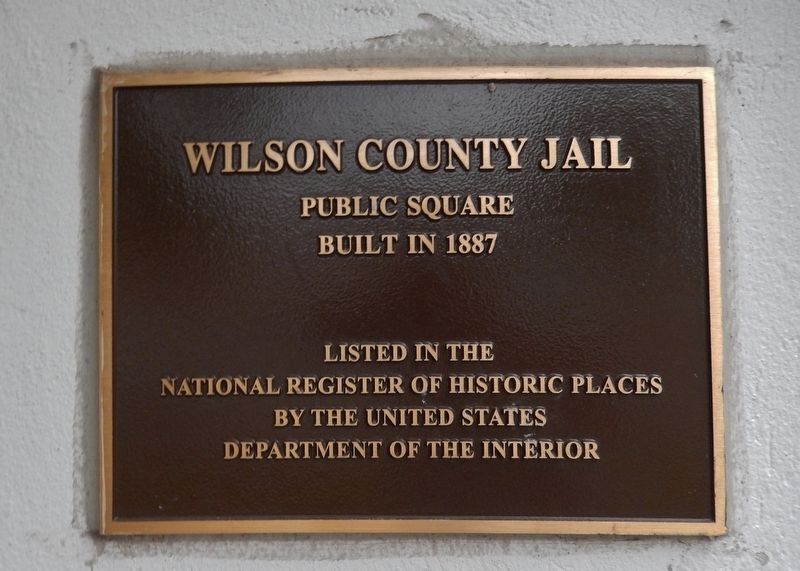 By Cosmos Mariner, May 20, 2018
1. Wilson County Jail Marker
Inscription.
Wilson County Jail. .
Public Square built in 1887 Listed in the National Register of Historic Places by the United States Department of the Interior . . This historical marker is in Floresville in Wilson County Texas

Location. 29° 8.028′ N, 98° 9.442′ W. Marker is in Floresville, Texas, in Wilson County. Marker is on C Street east of 3rd Street, on the right when traveling east. Marker is mounted at eye-level, directly on the front of the subject building, just left of the main front entrance. Touch for map. Marker is at or near this postal address: 1140 C Street, Floresville TX 78114, United States of America. Touch for directions. 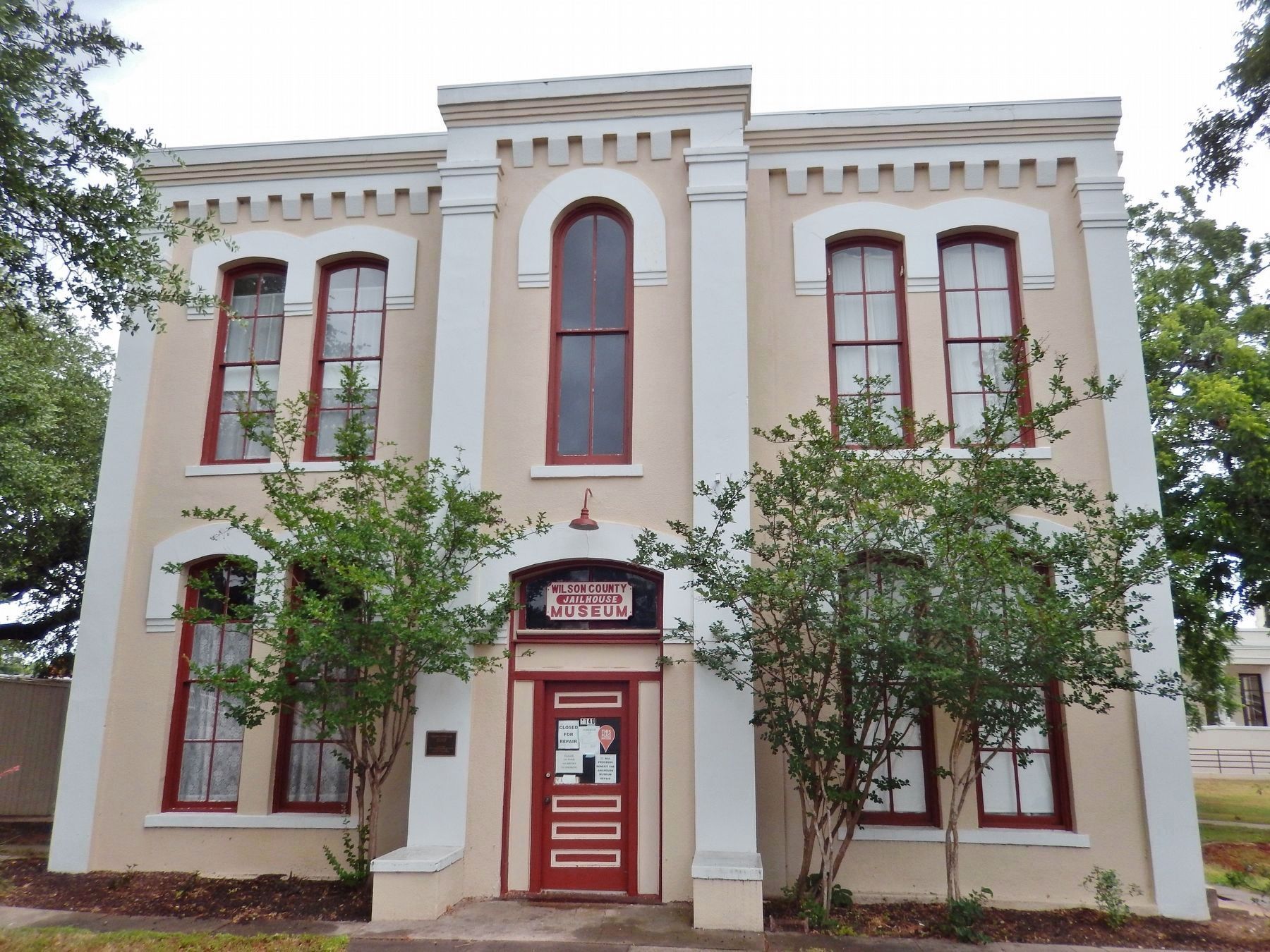 Related markers. Click here for a list of markers that are related to this marker. Wilson County Texas Courthouse & Jail

Also see . . .
1. The Floresville Jailhouse Museum.
The building was built in 1887 to serve as a jail and the residence of the sheriff and his family. It was used as such until 1974 when a new Criminal Justice Facility was built. The jail house was a two story building which could accommodate 32 prisoners. The ground floor and the front portion of the second floor served as the sheriff's living quarters. This consisted of two rooms upstairs and four rooms on the first floor. Food for the prisoners was prepared in the kitchen by the sheriff's wife or other helpers. Dice would be left on the counter to show how many prisoners there were to be fed. There was also a trap door for hanging but it did not function properly and was only used once. Afterwards scaffolds were built outside for hanging (Submitted on June 12, 2018, by Cosmos Mariner of Cape Canaveral, Florida.) 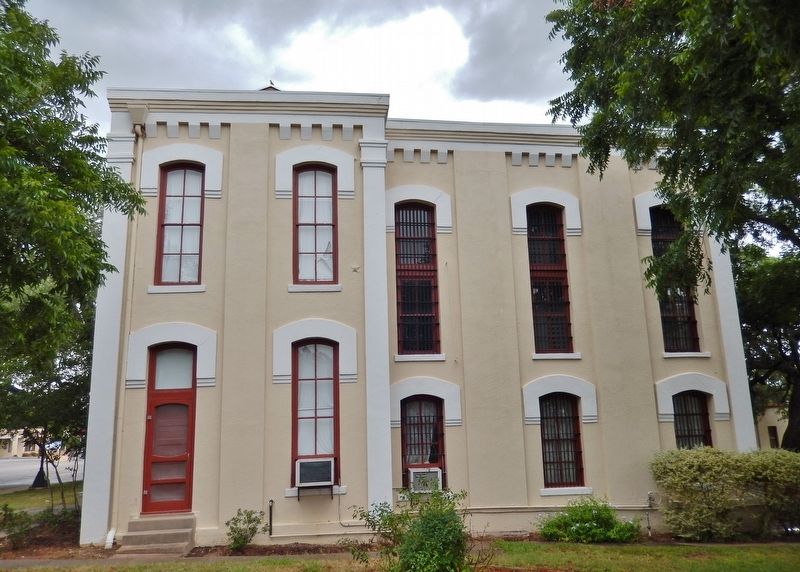 
2. Wilson County Jailhouse Musuem.
Although modern plumbing, heating, and lighting have been added over the years, the original floor plan has not been changed and the original jail cells still remain intact. In 1936 the exterior was modified by the Works Project Administration. The two gables on the east and west elevations were removed and the gable roof was changed to a hip roof. The brick crenellation which extended along the perimeter of the roof was removed as were the six brick chimneys. The double wooden gallery which extended across the front of the building was also demolished at this time. (Submitted on June 13, 2018, by Cosmos Mariner of Cape Canaveral, Florida.)

3. Wilson County Courthouse & Jail National Register of Historic Places Documentation.
Situated on the northeast corner of the courthouse square, the Wilson County Jail was constructed in 1887. Designed by the noteworthy architect James Riely Gordon the cubical jail has massive stuccoed brick walls highlighted by corner pilasters with molded capitals. Segmental arched windows with hood molds flank either side of the projecting central bay. Segmental arched hood molds cap the second floor windows of the central bay of the SW and NE facades. Dentil molding supports the cornice and a standing-seam hipped roof caps the jail. (Submitted on June 13, 2018, by Cosmos Mariner of Cape Canaveral, Florida.) 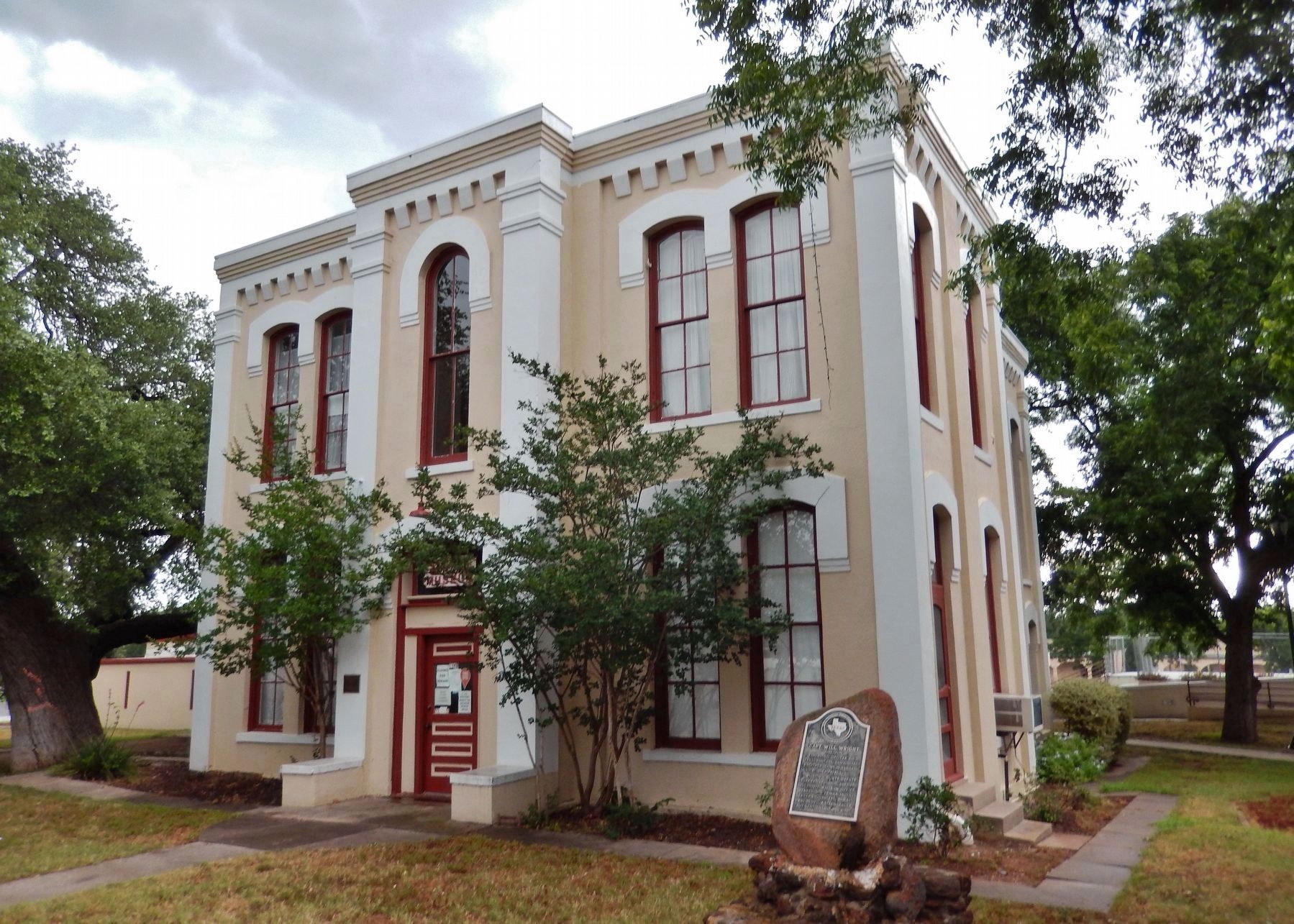