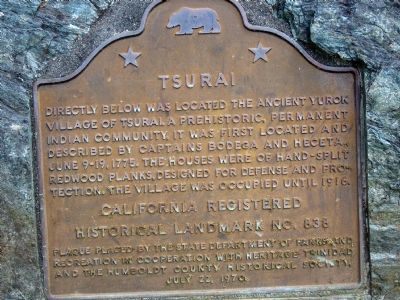 Directly below was located the ancient Yurok village of Tsurai. A prehistoric, permanent Indian community, it was first located and described by Captains Bodega and Heceta, June 9-19, 1775. The houses were of hand-split redwood planks, designed for defense and protection. The village was occupied until 1916.

Plaque placed by the State Department of Parks and Recreation in cooperation with Heritage Trinidad and the Humboldt County Historical Society.

Erected 1970 by State Department of Parks and Recreation in cooperation with Heritage Trinidad and the Humboldt County Historical Society. (Marker Number 838.)

Topics and series. This historical marker is listed in these topic lists: Native Americans • Settlements & Settlers. In addition, it is included in the California Historical Landmarks series list. A significant historical year for this entry is 1775. 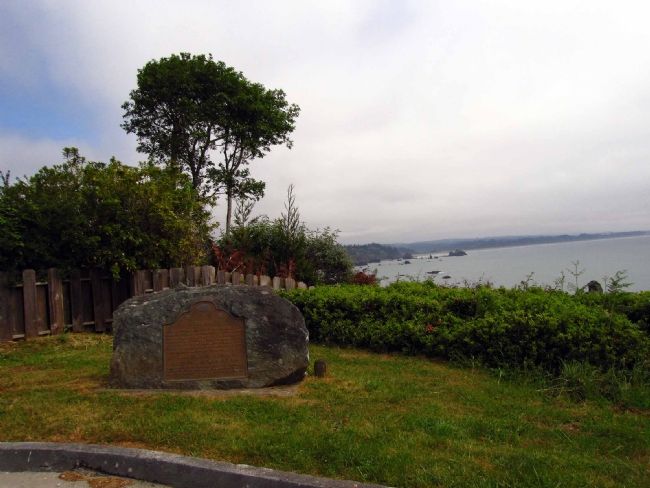 Click or scan to see
this page online
is in Trinidad, California, in Humboldt County. Marker is at the intersection of Edwards Street and Ocean Avenue, on the right when traveling north on Edwards Street. Touch for map. Marker is in this post office area: Trinidad CA 95570, United States of America. Touch for directions.

Other nearby markers. At least 5 other markers are within 12 miles of this marker, measured as the crow flies. Holy Trinity Church (about 600 feet away, measured in a direct line); Town of Trinidad (about 700 feet away); Spain Claims Northern California (approx. 0.6 miles away); William Z. Hegy (approx. 4½ miles away); Camp Curtis (approx. 12 miles away). Touch for a list and map of all markers in Trinidad. 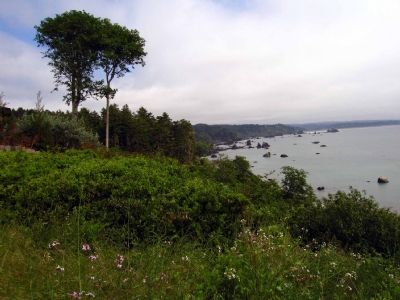 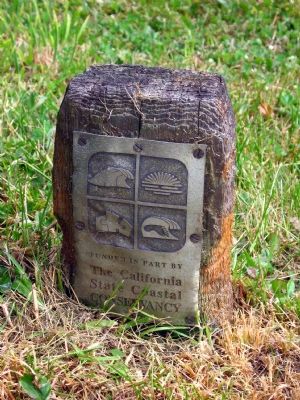