In early times, communities grew up around mills, particularly sawmills and grist mills. Settlers needed to make regular trips to grist mills in order to convert their grain crops into flour or meal for their families, livestock and sale. Other businesses found it sensible to locate their shops near the mill so outlying farmers could run many errands at one time. It is no wonder, the mill was the key to the community… and the millstone was the key to the mill.

The beginning of a town…
In 1834, Hiram and Joseph Putnam of Jackson County, hacked their way through solid timber, to Section 35 on the north bank of the Red Cedar River. Here, they built a log shanty near a 15 acre Indian planting ground. This was only the second settlement in Ingham County. After many misfortunes, the Putnams abandoned their efforts and returned to Jackson.

In 1839, Oswald B. Williams, James Miles Williams and Horace B. Williams, left New York State in search of a new start. Arriving in Detroit, they walked 70 miles to Ingham County to the Putnam's shanty on the Red Cedar River. In 1840, their father, Oswald Sr., 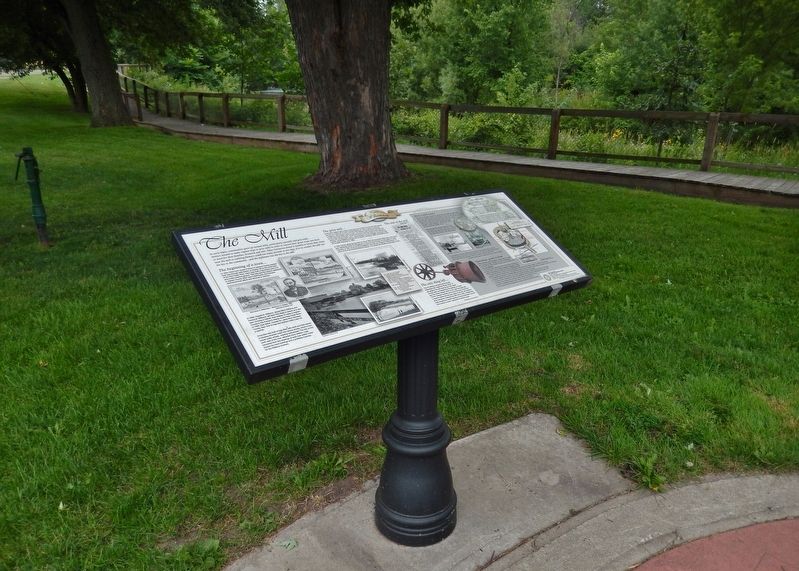 By Cosmos Mariner, July 23, 2017
2. The Mill Marker (wide view; Red Cedar River and walkway in background)
came from Genesee County, New York to help the brothers build a dam for a sawmill.

A log dam was built of logs filled with earth and field stones. A raceway diverted water into narrow chutes, which in turn, turned water wheels, creating hydropower. The mill, on the north side of the river, attracted more settlers. Logs harvested from the clearings of each new settler, made boards for more buildings and a profitable business for the Williams brothers.

The grist mill…
At this time, settlers had to make a three day trip to Dexter to have their grain ground into flour at a grist mill. In 1842, Oswald Williams Sr. went to Detroit, purchased a millstone, and brought it back by oxen. The Williams built The Red Cedar grist mill on the south side of the river. Oswald and Horace, sold their share of the business to James and moved to other towns. James stayed to run the business, marry and raise a family. James Williams sold the mill to Franklin Lombard in 1855, but remained here till his death September 8, 1886.

In 1845, the first village plat was laid out. Since 1839, two townships (Williamston and Locke) were collectively known as Phelpstown, in honor of David Phelps, the first settler in Locke Township. In 1857, by an act of the legislature, the town was renamed "Williamstown," in honor of the three founding Williams brothers. The 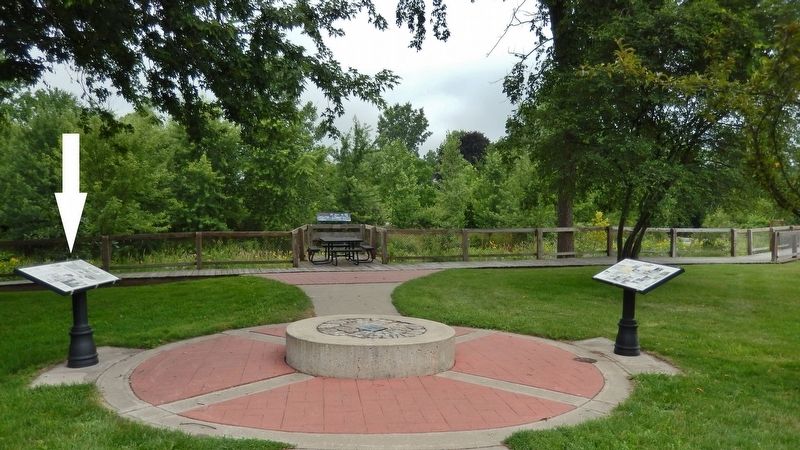 1855 -1880 - mill owners included: Diggs and Corgill of Detroit, Jonathon B. Taylor of Williamston, and Stephen Siegfried (who built a concrete dam)
1880 - Mead and Fleming
1887 - Hamilton M. Bigelow of Williamston
1899 - the mill was called the "Model City Mill", Wagar and Stewart, proprietors
1922 - the complex was called the "Stewart and Pfeifle Flour Mills"
1931 - the mill is listed as vacant
1941 - the mill operated under the name "Asa Strait and Son Alfalfa Metal Mill"…

How a mill works…
The mill is a multi-story machine. Its ground floor harnesses the water power, which turns wheels or turbines. The turbines turns a main axle, which in turn, turns gear after gear, operating moving machines on each floor. Small mills had only two stories, with a small turbine powering a saw on the floor above. Others were massive, 4-5 story complexes with grain elevators, multiple millstones, meal and flour sifters, conveyor belts and bagging chutes.

The millstone
Most people 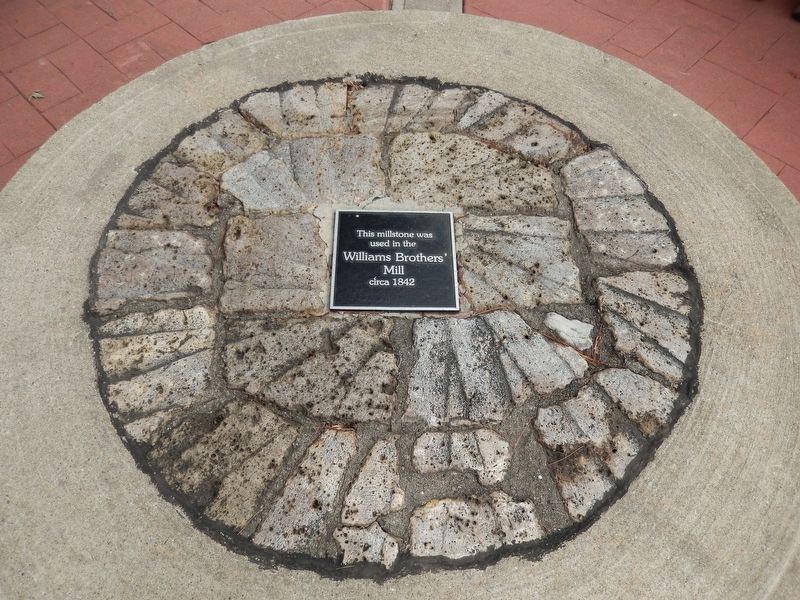 By Cosmos Mariner, July 23, 2017
4. Millstone from Williams Brothers' Mill, circa 1842
might think that millstones are round rocks that merely "turn" and "mash the grain into flour." Not exactly.

It is the millstone that makes the difference. The millstones do the work. They are the key that turns raw grain into fine flour. They must be turned at the right speed, have the right taper, have the right grooves (called furrows) and most important, have the "millers' touch" in its operation.

The stone Oswald Willams Sr, brought back from Detroit was most likely a French millstone. Special quartz was quarried principally at La Ferte-sous-Jouarre near the town of Chalons in the Marne Valley in Northern France. French burr (buhr) stones are composed of separate pieces of freshwater quartz each piece is known as a burr. Specially fitted, ground, tapered and dressed, French millstones were the common stone of early 19th century America.

"I can remember the miller turning an iron hand wheel, which opened a valve in the flume which allowed the water to flow. As the machinery started to turn, the whole building vibrated and a window near the hand wheel rattled. To a young boy, this was quite a thrill."
Recollections of Roland Fowler 1977, a lifetime resident of a New York grist mill community.

The only thing left…
This 15' turbine is all that is left of the last Williamston Mill. 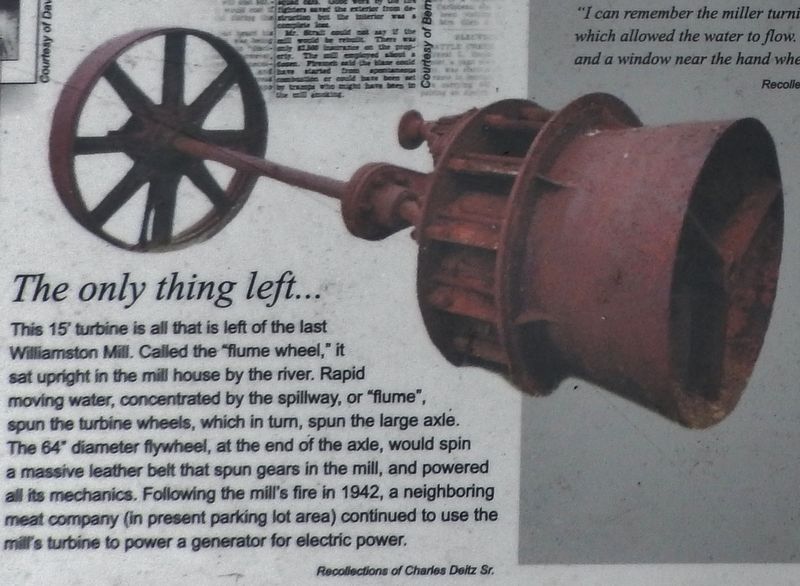 By Cosmos Mariner, July 23, 2017
5. This 15' turbine is all that is left of the last Williamston Mill
Called the "flume wheel," it sat upright in the mill house by the river. Rapid moving water, concentrated by the spillway, or "flume", spun the turbine wheels, which in turn, spun the large axle. The 64" diameter flywheel, at the end of the axle, would spin a massive leather belt that spun gears in the mill, and powered all its mechanics. Following the mill's, fire in 1942, a neighboring meat company (in present parking lot area) continued to use the mill's turbine to power a generator for electric power.

Operation: grain to flour…
1. When delivered, grain was taken by a sack hoist, or a chute with a moving conveyor "elevator," to a bin on a higher floor.
2. From here, the miller directed the grain, down a wooden chute, to the right millstone.
3. The miller would carefully feed 50 to 100 pounds, depending on the type of grain, into the millstone hopper (upside down triangle), carefully manipulating the grain into the eye of the runner stone.
4. The grain then fell into a device, hung below the hopper with leather straps called a shoe. It is called a shoe because originally it looked like a wooden shoe. The shoe can be raised or lower at one end to allow more or less grain to fall into the millstones.
5. The damsel was attached to the runner stone and spins around with it at 125 rpm.
6. The grain traveled from the center 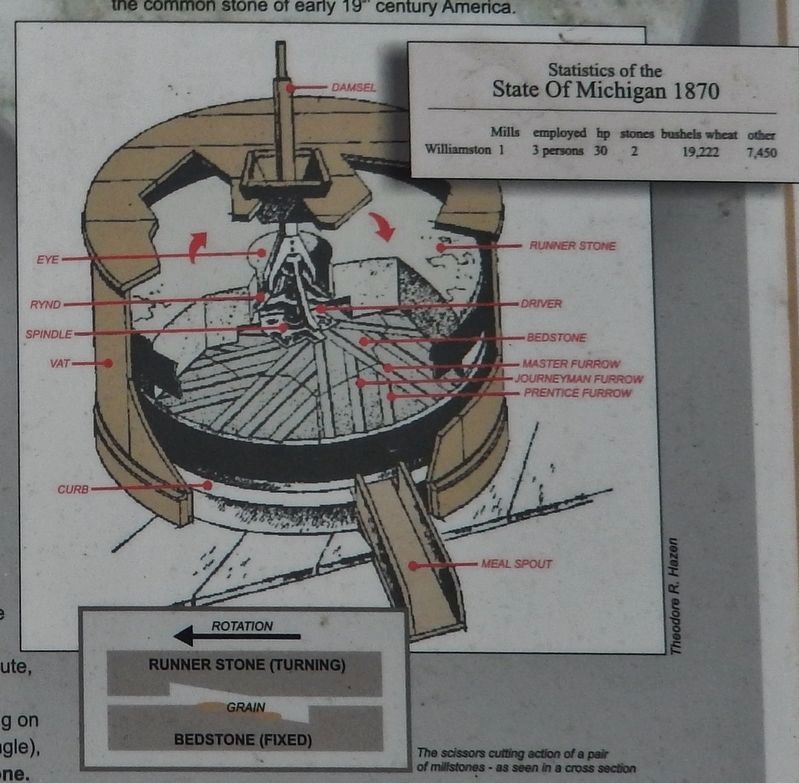 By Cosmos Mariner, July 23, 2017
6. Marker detail: grain to flour
out, through a gauntlet of specially dressed furrows, till it fell out the edge.
7. The ground grain collected in the surrounding wood vat and fell through the meal spout into a sack or tub.
8. The grain was collected and sent back upstairs where it was cleaned by hand or poured into a boulting machine, which sieved the bran out of the flour.
9.The finished product is directed down wooden chutes into bags for the farmer.