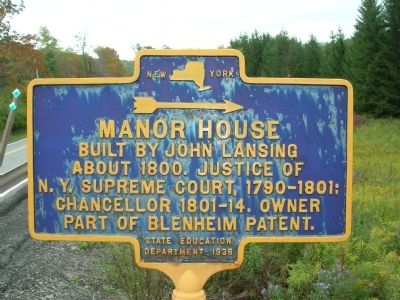 Topics. This historical marker is listed in this topic list: Settlements & Settlers. A significant historical year for this entry is 1800. 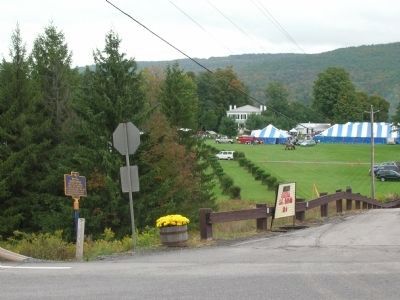 Photographed By Howard C. Ohlhous, September 27, 2008
2. Manor House Marker
The Lansing Manor House marker is posted at the side of Route 30 beside the driveway which leads to the New York State Power Authority's Blenheim-Gilboa Visitors Center. The roof and multiple chimneys of the Lansing Manor house can be seen in the distance.

Click or scan to see
this page online
Lansing Manor was built in 1819 by John Lansing, who was quite wealthy. He owned a large estate at Lansingburg and had a lucrative law practice. He was a major figure in government serving on the New York Assembly 1780-88, Albany's mayor between 1786-1790 and eleven years on the supreme court of New York. As a member of the New York ratifying convention, Lansing adamantly opposed the Constitution stating that the kind of government recommended by the convention could not "afford that security to equal and permanent liberty which we wished to make an invariable object of our pursuit." Lansing's death was most mysterious, while on a visit to New York City in 1829, he left his hotel to post some letters but never returned. No trace of him was ever found, so it was supposed that he had been murdered.

Lansing never lived in the manor. He built it for his daughter, Frances, and her husband, the Honorable Jacob Sutherland. The manor reflects the well to do lifestyle of Anglo-Dutch landowners. The Sutherlands owned the manor estate until 1836. Essentially, only four families occupied the Lansing Manor in its one hundred fifty-three years as a private residence. Dr. David Rosseter and his wife, Sarah, enjoyed the estate from 1849 through 1861 when they sold it to E.Y. Spring. Beech Wood Farm, as it was named by the spring family, became a successful farm and dairy operation. In 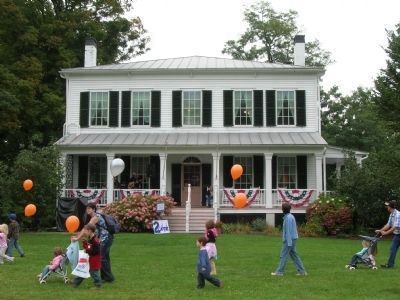 Photographed By Howard C. Ohlhous, September 27, 2008
3. Lansing Manor House
The Lansing Manor house is operated by the New York Power Authority in cooperation with the Schoharie County Historical Society and open for tours with guides who can detail all the history of the manor and the surrounding area. A history buff's dream come true, Lansing Manor is filled with authentic furnishings from the first half of the 19th century.
1911, they sold the estate to Luther Mattice. Sixty-one years later, in 1972 the Mattice heirs sold the farm to the New York Power Authority.

The house is a Federal style brick structure incased in wood siding and has changed little since 1819. At one time, black cherry trees lined the drive were carriages would approach the front, graced by a large fountain. Water was supplied to both the house and the fountain through a series of buried "Pipes" which were cedar logs with a hole bored through the center, allowing water to flow. The logs carried the water from a spring on the opposite hill. The home also had its own well with a winch that hauled up a bucket full of water at a time. Later, in the 1900's, Beech Wood Farm operated its own carbide gas plant for lighting the house and barns. Electricity was not installed until the 1940's.

An interesting story, handed down by the Spring family, is a tale of their Newfoundland dog. A large sized breed, the canine was harnessed to a butter churn and by circling around the barrel to turn the inner paddles would make the family's butter. However, the dog was clever enough to sense when the regular day for the chore approached and would promptly disappear the night before. Since the dog was expected to "pull his weight" on the farm, he was confined the night before to ensure his appearance in the morning. 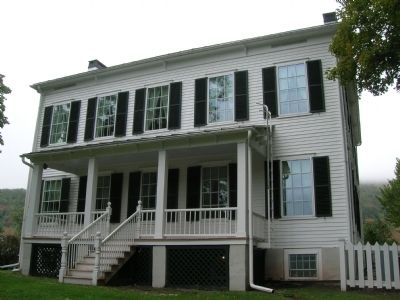 Photographed By Howard C. Ohlhous, September 27, 2008
4. Lansing Manor House
This is the back side of the Lansing Manor House.
the house and barns there are a number of other outbuildings clustered around which were important for taking care of the business of farming, including a servant's quarters, a laundry building/creamery/land office, a wellhead house, an ice house and a milk house. The19th-century dairy barn has been converted for use as the admission-free Visitors Center of the New York Power Authority owned Blenheim-Gilboa Pumped Storage Power Project in North Blenheim. The house, which is listed in the National Register of Historic Places, is now operated by the Power Authority in cooperation with the Schoharie County Historical Society.

Additional commentary.
1. John Lansing Jr. Cenotaph
Mr. Lansing (mysteriously disappeared on 12 Dec 1829) is reported to be memorialized with a cenotaph in Albany Rural Cemetery in Menands, NY. Despite numerous web attributions to the cenotaph, it could not be located on our last visit—even with the assistance of very helpful cemetery office personnel. Anyone with a photograph of the memorial is encouraged to add it to this page.
— Submitted November 5, 2011, 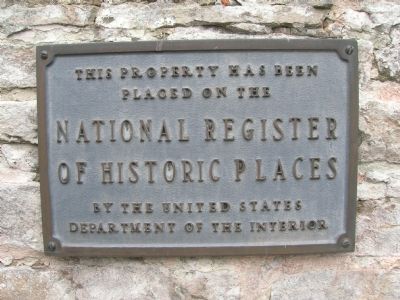 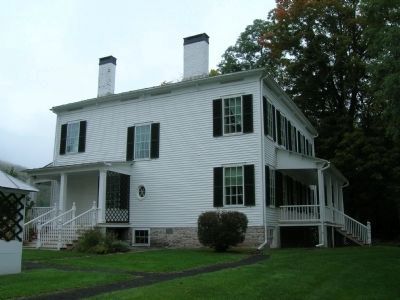