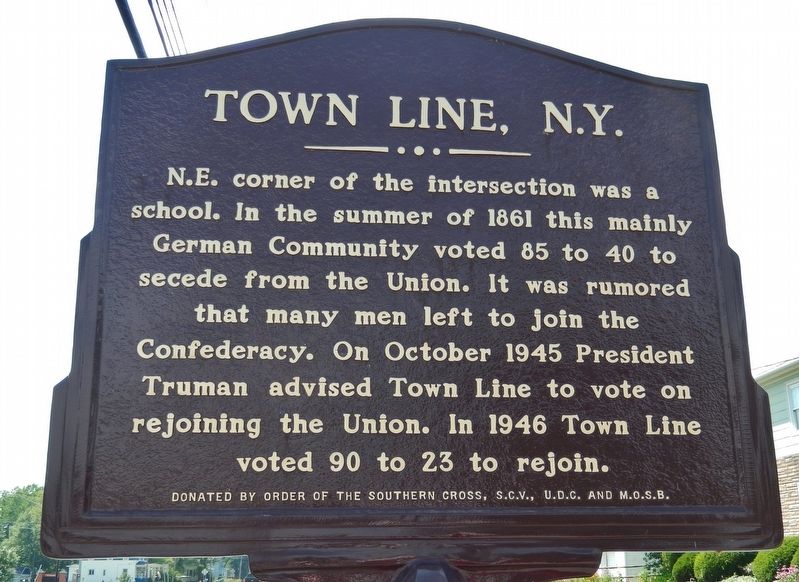 N.E. corner of the intersection was a school. In the summer of 1861 this mainly German Community voted 85 to 40 to secede from the Union. It was rumored that many men left to join the Confederacy. On October 1945 President Truman advised Town Line to vote on rejoining the Union. In 1946 Town Line voted 90 to 23 to rejoin.

Topics and series. This historical marker is listed in these topic lists: Government & Politics • War, US Civil. In addition, it is included in the Former U.S. Presidents: #33 Harry S. Truman series list. 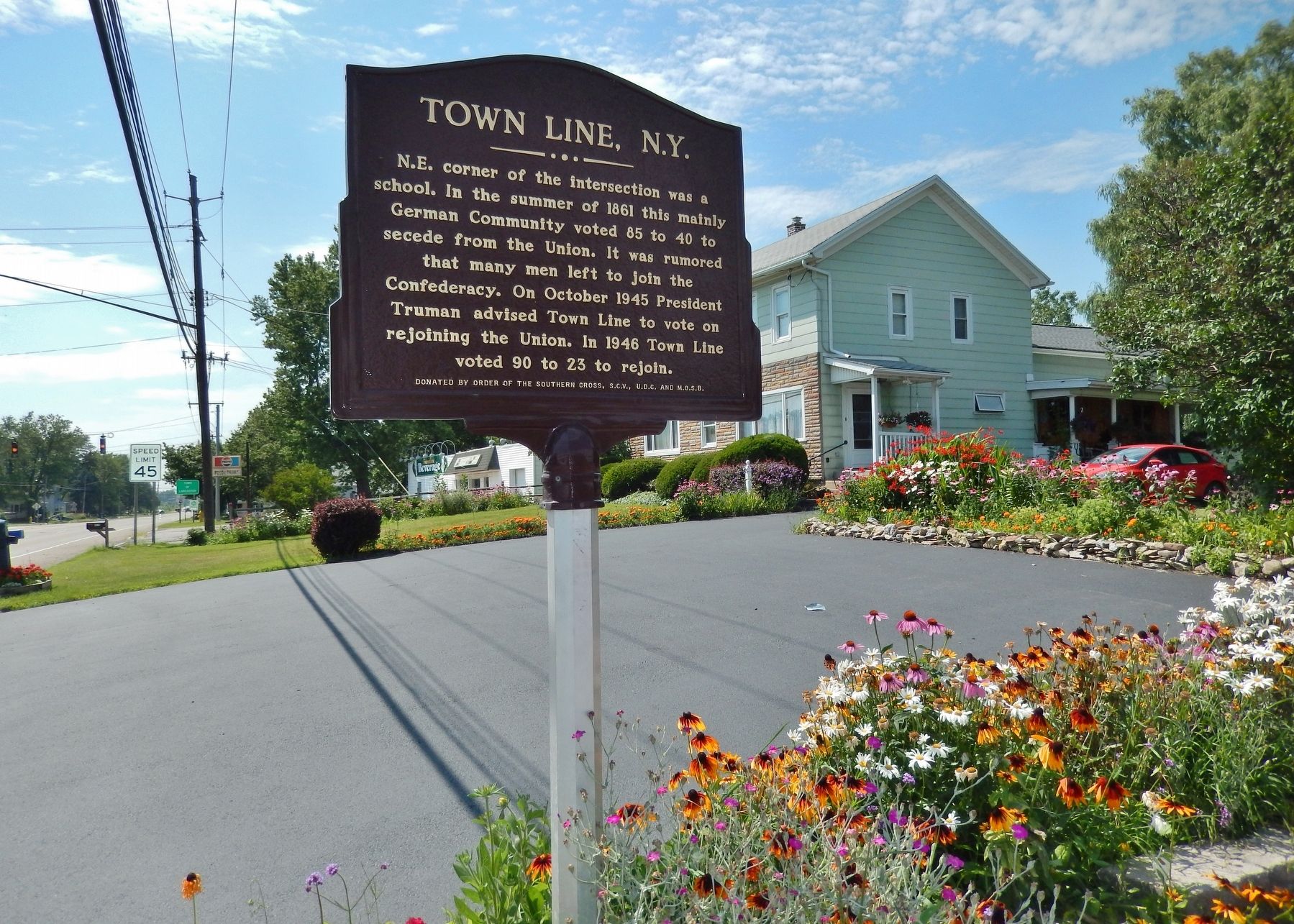 Related markers. Click here for a list of markers that are related to this marker. Town Line, N.Y. in the Civil War

Also see . . .
1. Town Line, New York. Oral lore says that in 1861, 125 men supposedly gathered in an informal meeting and passed by 85 to 40 a resolution to secede from the United States. Because Town Line was never an incorporated municipal entity in the first place and had no well-defined boundaries, the resolution had no legal effect; neither the Confederacy nor the Union ever formally recognized the action. Several members of the German-American community fled to Canada; five residents crossed the Mason–Dixon line to fight with the Confederates in their Army of Northern Virginia, and twenty residents fought for the Union Army. Town Line held a ceremony on January 24, 1946, to "rejoin" the Union, along with a vote (overseen by Hollywood celebrity Cesar Romero) in which the residents voted, 90 to 23, to rescind the old vote. (Submitted on June 18, 2018, by Cosmos Mariner of Cape Canaveral, Florida.)

2. Upstate town touts role as "last holdout of the Confederacy". Townsfolk gathered at the local schoolhouse just after war broke out. After a rowdy discussion, they voted 80 to 45 to secede from the Union, signing a declaration on a sturdy wooden desk that is a treasured town artifact. Shortly after, five local men headed south and joined the Confederate Army. “The country was literally coming apart at the seams. And the seams tore much farther north than most people realize. It didn’t stop at the Mason-Dixon Line." But locals are still unsure why Town Line, just minutes from Canada, took such a dramatic step. The town supported Abraham Lincoln for president the year before, and residents were mostly German immigrants, without connections to the American south. (Submitted on June 18, 2018, by Cosmos Mariner of Cape Canaveral, Florida.)
Credits. This page was last revised on June 19, 2018. It was originally submitted on June 18, 2018, by Cosmos Mariner of Cape Canaveral, Florida. This page has been viewed 91 times since then and 18 times this year. Photos:   1, 2. submitted on June 18, 2018, by Cosmos Mariner of Cape Canaveral, Florida. • Bill Pfingsten was the editor who published this page.
Share This Page.