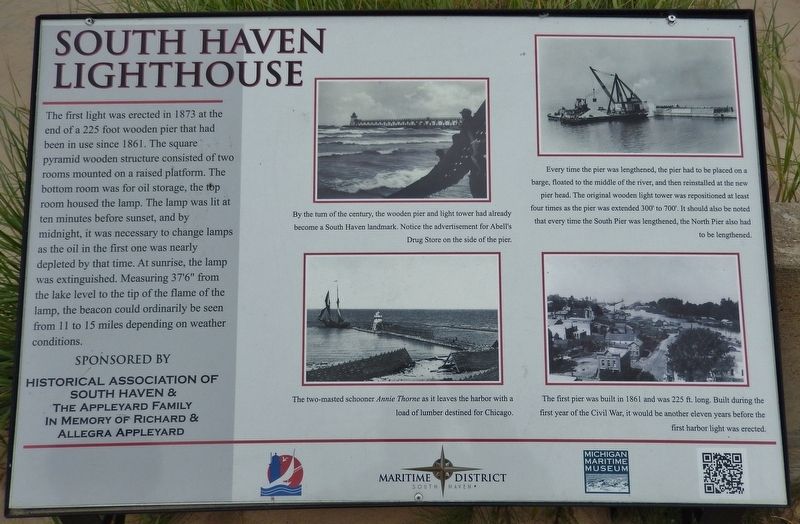 The first light was erected in 1873 at the end of a 225 foot wooden pier that had been in use since 1861. The square pyramid wooden structure consisted of two rooms mounted on a raised platform. The bottom room was for oil storage, the top room housed the lamp. The lamp was lit at ten minutes before sunset, and by midnight, it was necessary to change lamps as the oil in the first one was nearly depleted by that time. At sunrise, the lamp was extinguished. Measuring 37'6" from the lake level to the tip of the flame of the lamp, the beacon could ordinarily be seen from 11 to 15 miles depending on weather conditions.

Erected by Historical Association of South Haven, The Appleyard family in memory of Richard & Allegra Appleyard, and Michigan Maritime Museum. 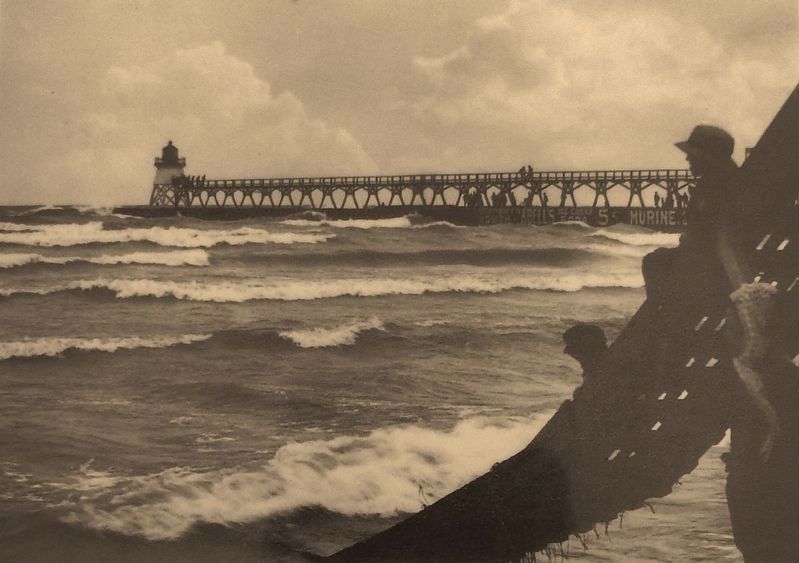 2. Marker detail: First wooden pier and light tower
By the turn of the century, the wooden pier and light tower had already become a South Haven landmark. Notice the advertisement for Abell's Drug Store on the side of the pier.
42° 24.111′ N, 86° 17.016′ W. Marker is in South Haven, Michigan, in Van Buren County. Marker can be reached from Water Street 0.1 miles west of St. Joseph Street, on the right when traveling west. Marker is located on the South Haven Harbor Walk, near the east end of South Beach Park. Marker overlooks the beach park, pier catwalk and lighthouse (from a distance). Touch for map. Marker is at or near this postal address: 10 Water Street, South Haven MI 49090, United States of America. Touch for directions. 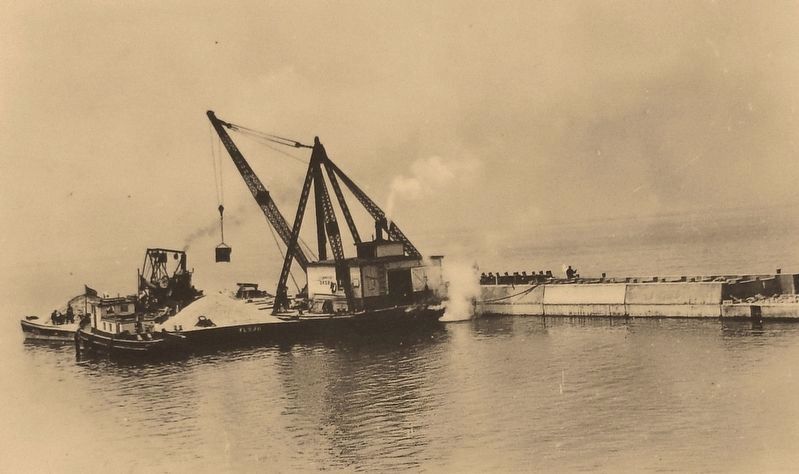 3. Marker detail: Extending the pier
Every time the pier was lengthened, the pier had to be placed on a barge, floated to the middle of the river, and then reinstalled at the new pier head. The original wooden light tower was repositioned at least four times as the pier was extended 300' to 700'. It should also be noted that every time the South Pier was lengthened, the North Pier also had to be lengthened.
The tower is a shortened version of the Muskegon South Pierhead Light, and replaced an 1872 wooden tower. The catwalk is original and still links the tower to shore: it is one of only four that survive in the State of Michigan. (Submitted on June 25, 2018, by Cosmos Mariner of Cape Canaveral, Florida.)

2. South Haven, Michigan Light House (Pier Light). Throughout the 1860’s, as South Haven grew as a port, several attempts were made to increase the width of the channel. Already the Black River served as an important means for the settlers to transport lumber products to the cities along the lakes. By 1867, the width of the channel was such to allow almost any vessel through. Soon, it became evident that a pier head beacon at the end of the pier, along with a keepers dwelling, should be developed. In 1868, the Lighthouse Board requested money for construction of the pier head beacon on the chosen site, but there were setbacks. In 1871, construction finally began on a bluff near the shore. By 1872, the original South Haven light shone for the first time. (Submitted on June 25, 2018, by Cosmos Mariner of Cape Canaveral, Florida.) 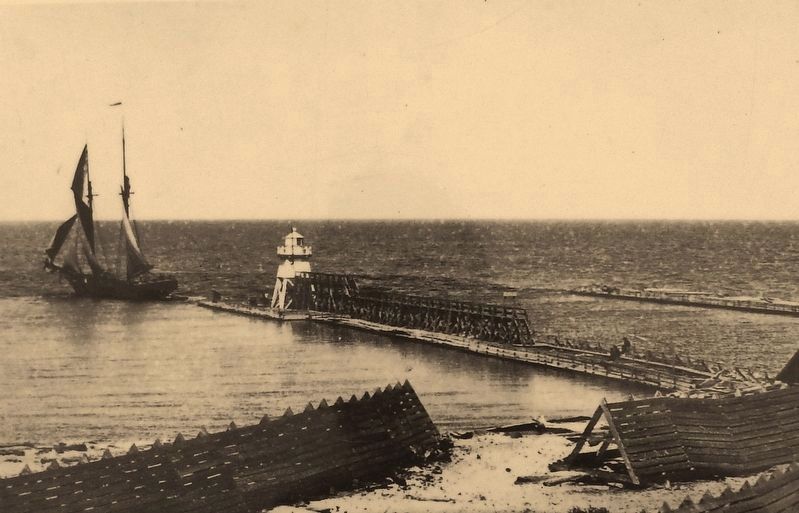 4. Marker detail: The two-masted schooner Annie Thorne
The two-masted schooner Annie Thorne as it leaves the harbor with a load of lumber for Chicago.
1872 to 1889. An earlier keeper, Captain William P. Bryan completed the first entries. The logs have been photographed to provide access to an insight into the daily duties of the light keeper. Donahue provides detailed entries about his daily activities and tasks in the Light Station, and descriptions about shipwrecks, including the name of the ship and the fate of the crew. In addition to accounts of the operation of the lighthouse, Donahue also provided intimate insights into the lives of his family and sometimes community members. (Submitted on June 25, 2018, by Cosmos Mariner of Cape Canaveral, Florida.)

5. The South Haven Lighthouse. The South Pier and lighthouse has seen many changes over the years: In 1901, the 30′ wood tower was moved some 250′ to the new pier head with an elevated walkway. Two years later, after 30 years of harsh Lake Michigan weather, the old wood tower was replaced a new 35′ cylindrical metal tower. In 1913 the piers were extended once more, and the tower was moved 425 feet to a new location at the end of the pier. In 1916 a fifty-two foot tall steel range tower was built on the pier some 800 feet inward from the pier head light. Later the range tower was removed. In 1923, the mineral oil-fired 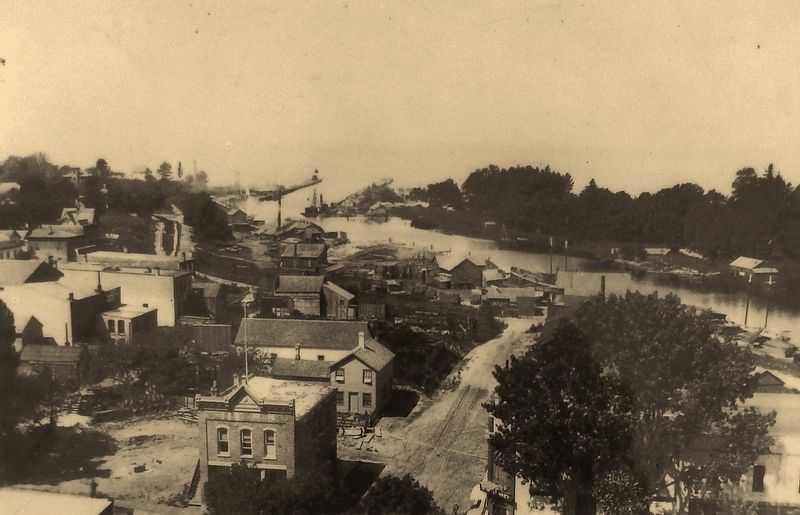 July 24, 2017
5. Marker detail: The first pier was built in 1861 and was 225 ft. long
Built during the first year of the Civil War, it would be another eleven years before the first harbor light was erected.
lamp was replaced with a 200 watt electric bulb and the hand-operated bellows-type fog horn was replaced by a 1600-pound electrified fog bell. The Fog Bell was replaced by a drone-type fog horn with an audible range of 15 miles in 1937. In 1940, today’s 1200-foot concrete pier was constructed and sometime after that The wood walkway was replaced with an iron system salvaged from a job site in Chicago and like many Great Lakes Lighthouses, the tower was received its distinctive red exterior. (Submitted on June 25, 2018, by Cosmos Mariner of Cape Canaveral, Florida.) 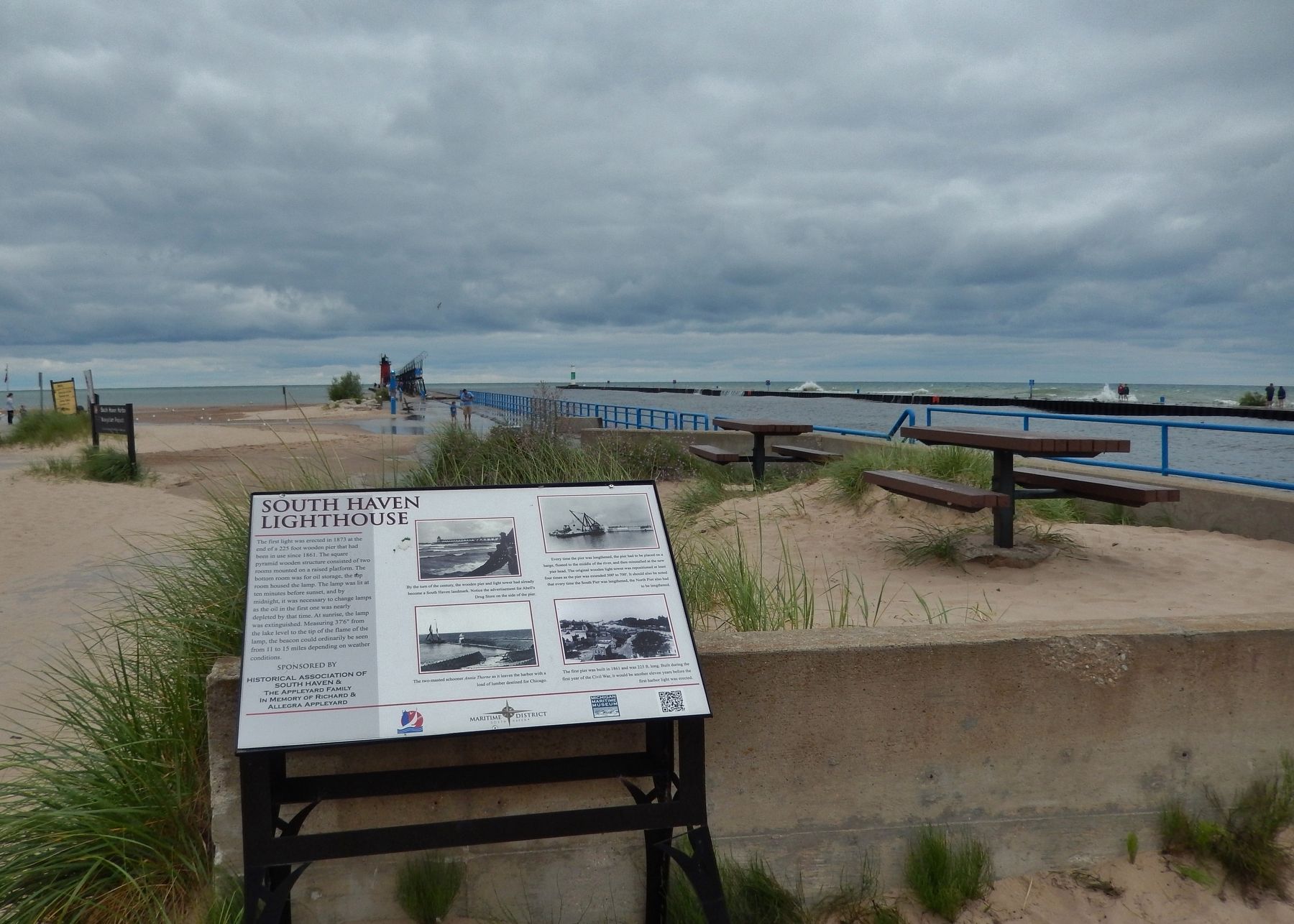 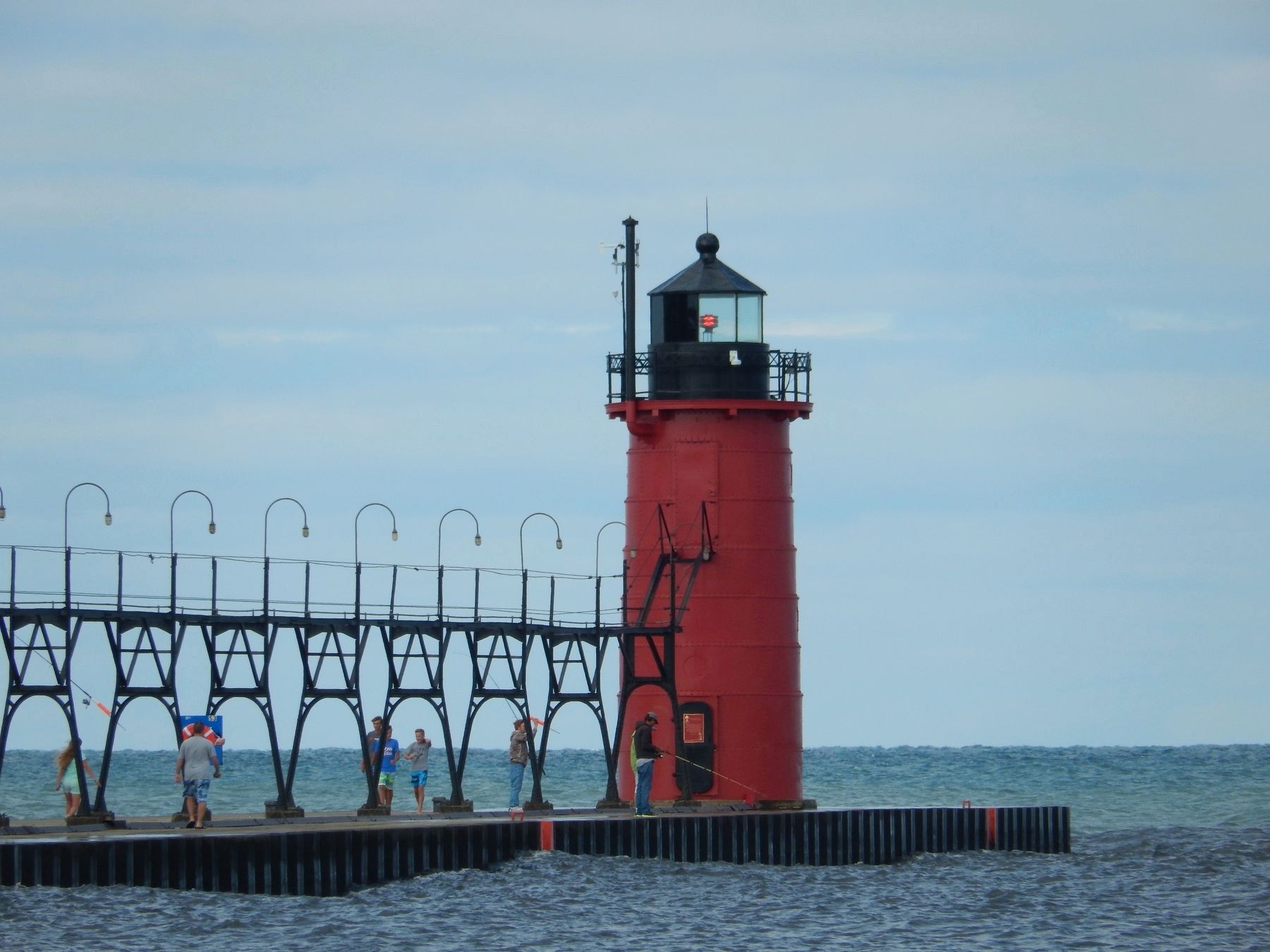 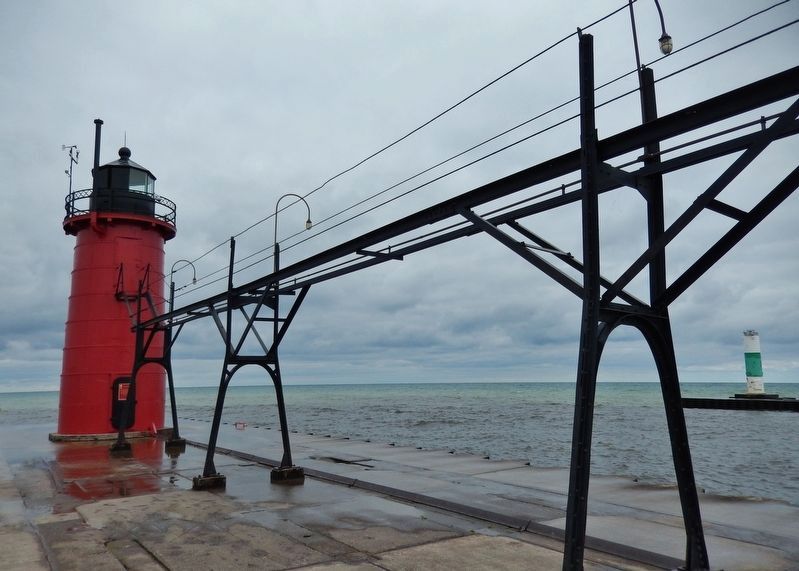 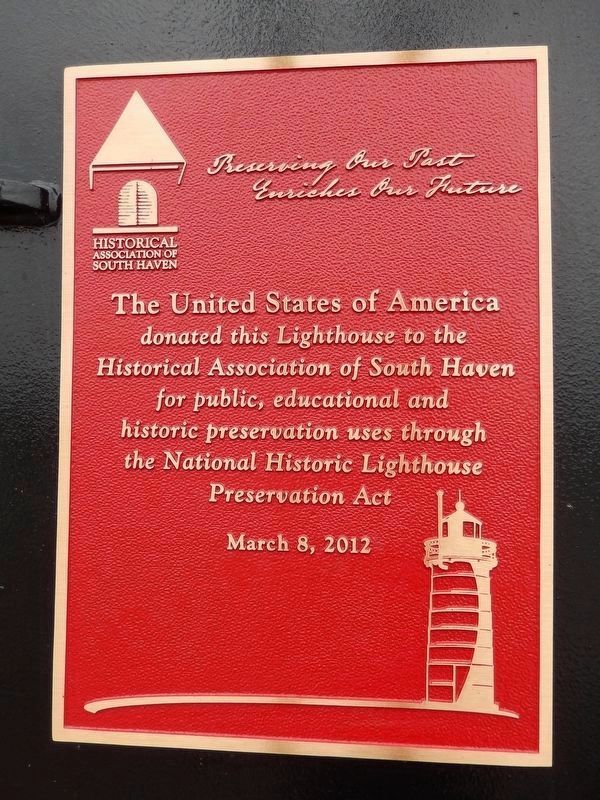 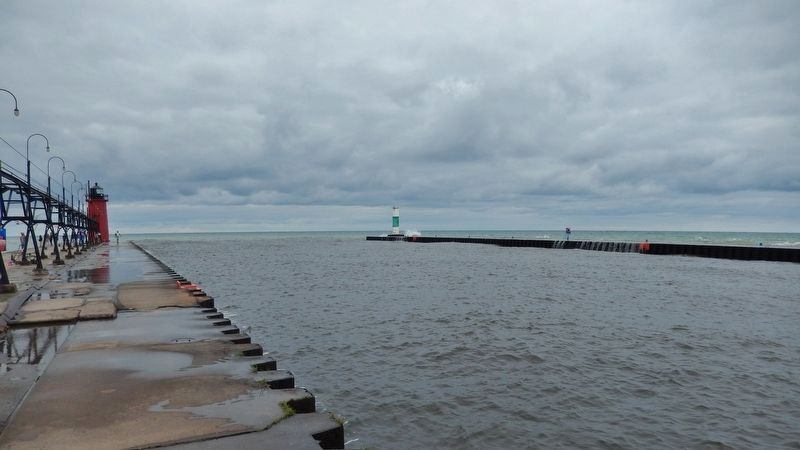 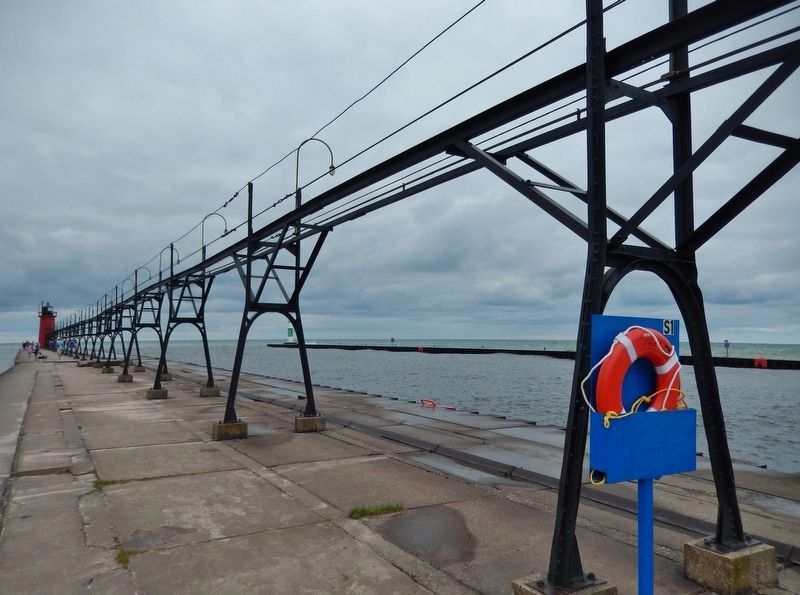 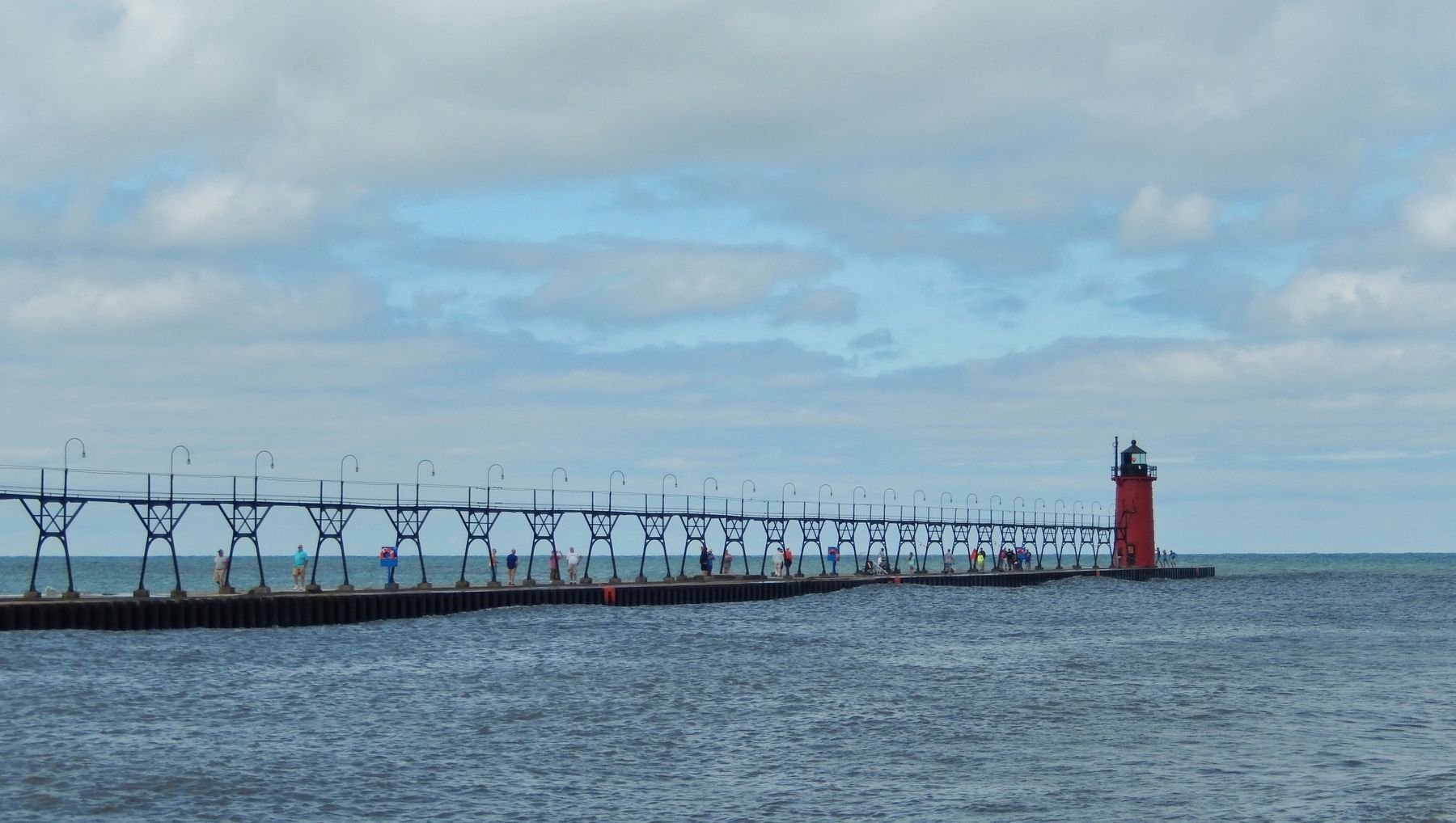