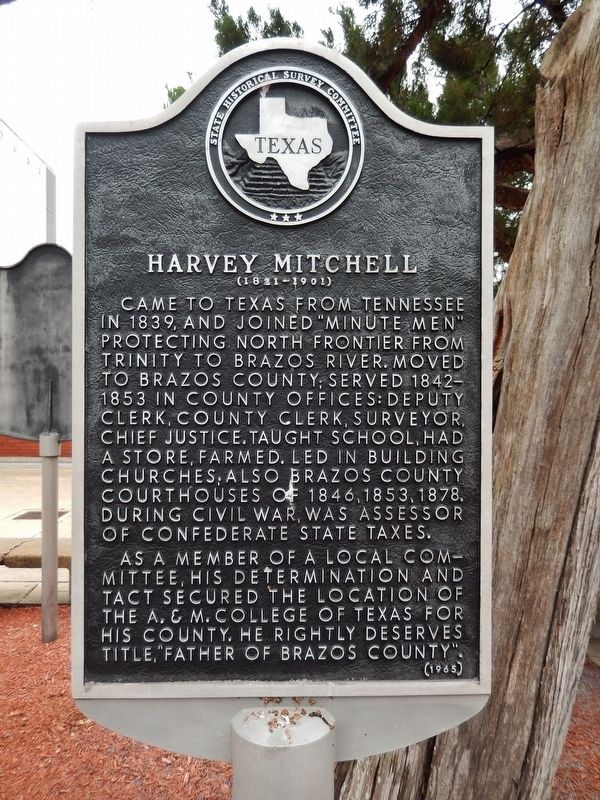 By Cosmos Mariner, May 26, 2014
1. Harvey Mitchell Marker
Inscription.
Harvey Mitchell. Came to Texas from Tennessee in 1839, and joined "minute men" protecting north frontier from Trinity to Brazos River. Moved to Brazos County; served 1842-1853 in County offices: Deputy Clerk, County Clerk, Surveyor, Chief Justice. Taught school, had a store, farmed. Led in building churches; also Brazos County courthouses of 1846, 1853, 1878. During Civil War, was assessor of Confederate state taxes. . . As a member of a local committee, his determination and tact secured the location of the A. & M. College of Texas for his county. He rightly deserves title, "Father of Brazos County". . This historical marker was erected in 1965 by State Historical Survey Committee. It is in Bryan in Brazos County Texas

As a member of a local committee, his determination and tact secured the location of the A. & M. College of Texas for his county. He rightly deserves title, "Father of Brazos County". 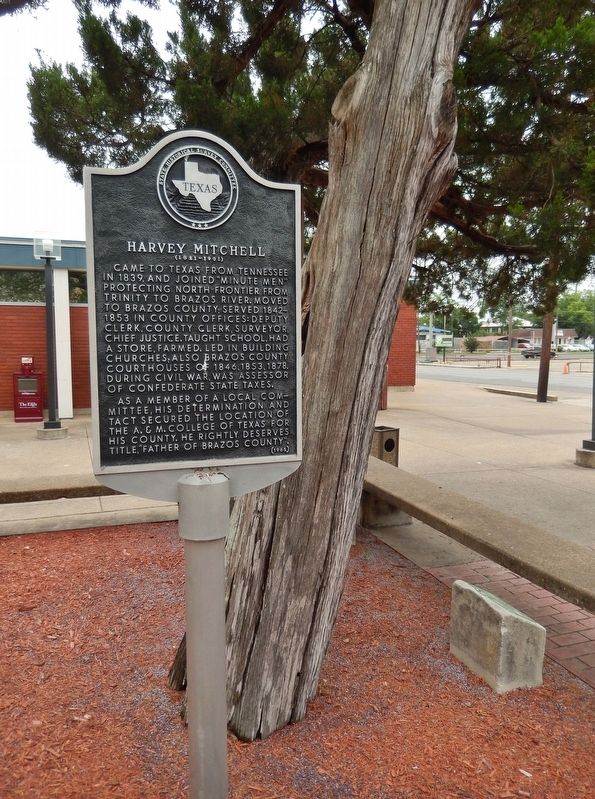 By Cosmos Mariner, May 26, 2014
2. Harvey Mitchell Marker (tall view)
Local Road 68), on the right when traveling west. Marker is located in small plaza near Brazos County Courthouse main entrance. Touch for map. Marker is at or near this postal address: 300 East 26th Street, Bryan TX 77803, United States of America. Touch for directions.

Also see . . .
1. Harvey Mitchell- Father of Brazos County and Texas A&M.
In 1871, when the Texas Legislature was searching for a college location, Mitchell, this leader of rural low-populated Brazos County, saw an opportunity. Despite the fact that several large cities were avidly seeking this prize college, Mitchell, along with his three man committee, reached out to grab this brass ring. They donated nearly 2500 acres of Brazos County land to the State of Texas. The Agricultural and Mechanical College of Texas was established in what would become College Station by the state legislature on April 17, 1871 as the state’s 1st public institution of higher education (Submitted on December 7, 2017, by Cosmos Mariner of Cape Canaveral, Florida.)