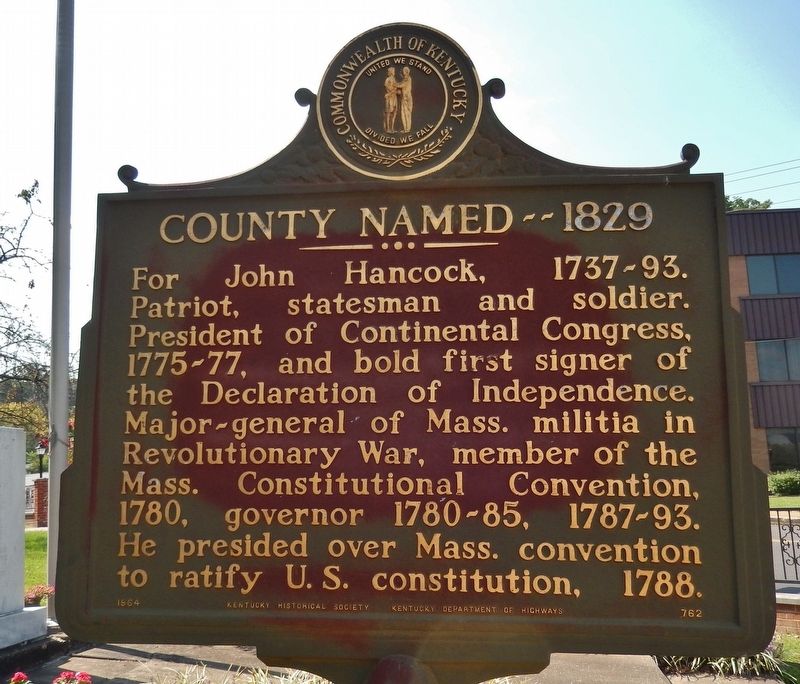 Photographed By Cosmos Mariner, September 17, 2017
1. County Named 1829 Marker
Inscription.
County Named - 1829. . For John Hancock, 1737-93. Patriot, statesman and soldier. President of Continental Congress, 1775-77, and bold first signer of the Declaration of Independence. Mayor-general of Mass. militia in Revolutionary War, member of the Mass. Constitutional Convention, 1780, governor 1780-85, 1787-93. He presided over Mass. convention to ratify U.S. constitution, 1788. . This historical marker was erected in 1964 by Kentucky Historical Society and Kentucky Department of Highways. It is in Hawesville in Hancock County Kentucky

For John Hancock, 1737-93. Patriot, statesman and soldier. President of Continental Congress, 1775-77, and bold first signer of the Declaration of Independence. Mayor-general of Mass. militia in Revolutionary War, member of the Mass. Constitutional Convention, 1780, governor 1780-85, 1787-93. He presided over Mass. convention to ratify U.S. constitution, 1788.

Topics. This historical marker is listed in these topic lists: Government & Politics • Patriots & Patriotism • War, US Revolutionary. A significant historical year for this entry is 1829.

Location. 37° 54.072′ N, 86° 44.96′ W. Marker is in Hawesville, Kentucky, in Hancock County. Marker is at the intersection of Main Street (Kentucky Route 69) and Madison Street (Kentucky Route 69), on the right when traveling south on Main Street. Marker is located beside the sidewalk, just inside the fence, in a small plaza at the north corner of the old Hancock County Courthouse grounds. Touch for map. Marker is in this post office area: Hawesville KY 42348, United States of America. Touch for directions.

Other nearby markers. At least 8 other markers are within walking distance of this marker. Hawesville Railroad Station (about 700 feet away, measured in a direct line); Hawesville (approx. 0.2 miles away); Captain William Davison / Steamboat Disaster 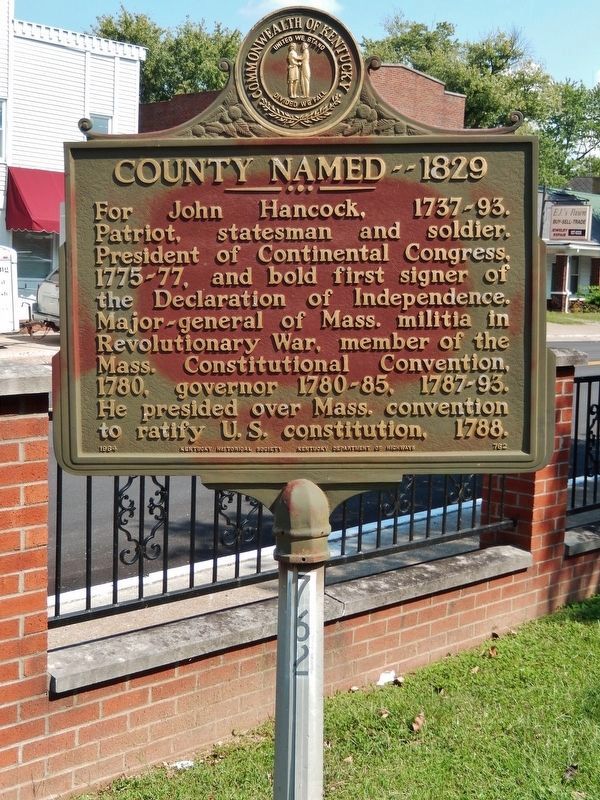 Also see . . .  Hancock County, Kentucky. On January 3rd in 1829, Kentucky Governor Thomas Metcalfe signed into law a statute forming Hancock County from parts of Breckinridge, Daviess and Ohio counties to become Kentucky's 85th county. The County was named in honor of the Boston patriot John Hancock who headed the Continental Congress and became the most notable signer of the Declaration of Independence. (Submitted on July 6, 2018, by Cosmos Mariner of Cape Canaveral, Florida.) 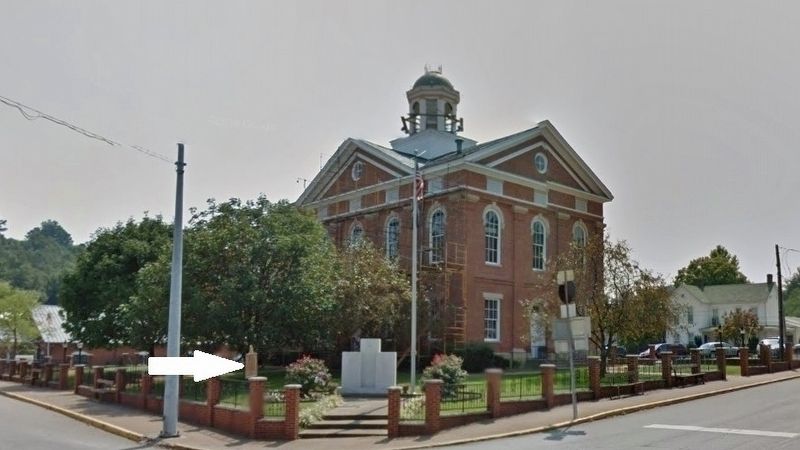 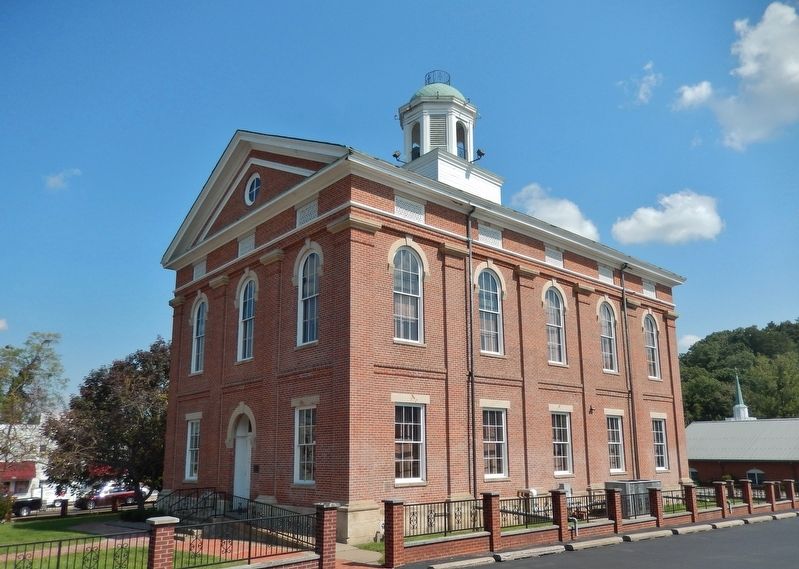 Photographed By Cosmos Mariner, September 17, 2017
4. Hancock County Courthouse (marker is at north corner of courthouse grounds)
(from http://hancockky.us/History/courthouse.htm)
The second oldest courthouse in the Commonwealth of Kentucky is located in Hawesville on the Ohio River. Its construction was started in 1865 and completed in 1867 and is a sterling example of its period, suggesting the Greek Revival temple form. The courthouse exterior has been restored exactly as it was originally designed during the Civil War. The old bell in the tower was forged in Louisville in 1846 and was used in the first courthouse at Utility. 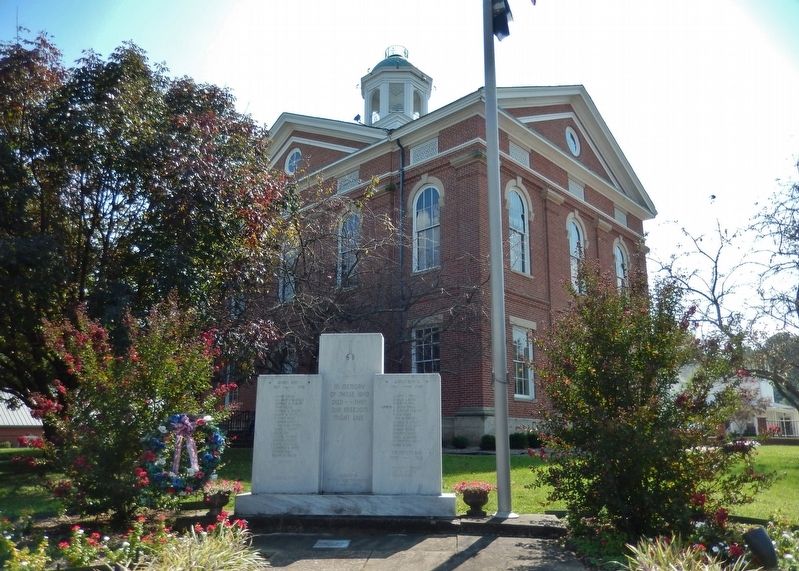