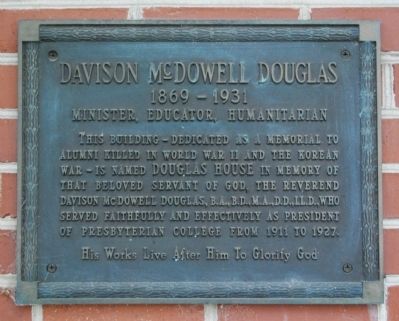 Photographed By Brian Scott, September 27, 2008
1. Davison McDowell Douglas Marker
Inscription.
Davison McDowell Douglas. , This building -- dedicated as a memorial to alumni killed in World War II and the Korean War -- is named Douglas House in memory of that beloved servant of God, the Reverend Davison McDowell Douglas, B.A., B.D., M.A., D.D., LL.D., who served faithfully and effectively as President of Presbyterian College from 1911-1927. ,
His Works Live After Him to Glorify God. . This memorial is in Clinton in Laurens County South Carolina

This building -- dedicated as a memorial to alumni killed in World War II and the Korean War -- is named Douglas House in memory of that beloved servant of God, the Reverend Davison McDowell Douglas, B.A., B.D., M.A., D.D., LL.D., who served faithfully and effectively as President of Presbyterian College from 1911-1927.


His Works Live After Him to Glorify God

Topics. This memorial is listed in these topic lists: Churches & Religion • Education.

Location. 34° 27.883′ N, 81° 52.583′ W. Marker is in Clinton, South Carolina, in Laurens County. Memorial is on Presbyterian College Road west of South Adair Street, on the right when traveling east. Marker is to the left of the Douglas Hall's front entrance. Touch for map. Marker is in this post office area: Clinton SC 29325, United States of America. Touch for directions. 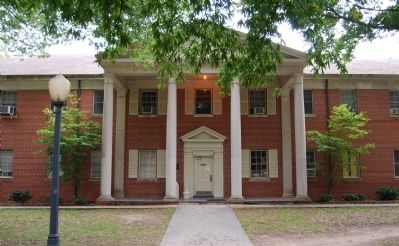 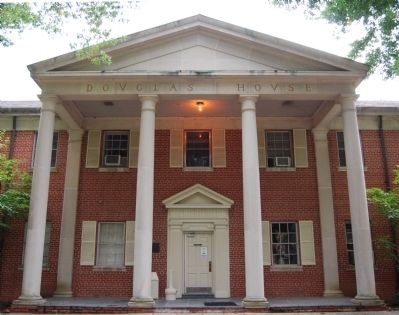 Photographed By Brian Scott, September 27, 2008
3. Douglas Hall - Front Entrance
a number of years, and comes of a family that has supplied many stanch Presbyterians to South Carolina. For the past eight years Doctor Douglas has been president and active head of the Presbyterian College of South Carolina at Clinton. He was born at Blackstock in Fairfield County, this state, June 20, 1869, a son of Rev. James and Margaret (McDowell) Douglas. His great-grandfather, Alexander Douglas, was born in Ulster, Ireland, and came to America in 1790, settling soon afterward at a place six miles west of Winnsboro, South Carolina. At his death he was buried in the Lebanon Presbyterian Cemetery near his old home. More than a century and a quarter has passed since he came to South Carolina, and through several generations the Douglas name has furnished stalwart men and high minded women to their various spheres of duty and responsibility. Doctor Douglas' grandparents were John and Grace Jane (Brice) Douglas, also natives of South Carolina. Rev. James Douglas, his father, was born in Fairfield County March 10, 1827, and died August 21, 1904. He graduated with first honors from Davidson College in North Carolina in 1849, and later graduated from Columbia Theological Seminary. For a number of years he was president of York Female College of this state, and did active duty as a pastor of various churches in Fairfield County for a quarter of a century. His wife was a daughter of 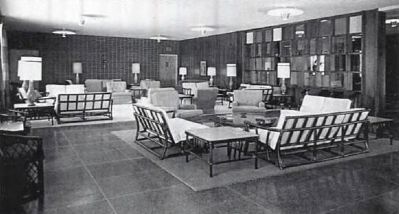 Presbyterian College by Nancy Griffith, circa 1970
4. Douglas Hall - Main Lounge
Davison and Catherine (McCrea) McDowell. Her maternal grandfather, Thomas McCrea, was a native of South Carolina and went with the South Carolina troops as a soldier in the war of the Revolution. This revolutionary patriot married Catherine DuBois thus introducing a strain of Huguenot Mood into the family. The DuBois family came from France in 1678.

Davison McDowell Douglas was liberally educated, graduating A.B. from Davidson College in North Carolina in 1805 and studying for the ministry in Louisville Theological Seminary during 1895-96 and in 1899 receiving his Bachelor of Divinity degree from Columbia Theological Seminary. The University of South Carolina gave him his Master of Arts degree in 1900, and during the following year he was a student in Princeton University and Theological Seminary, while in 1904-06 he did post-graduate work in Johns Hopkins University at Baltimore.

Doctor Douglas, who was awarded his Doctor of Divinity degree by Davidson College in 1912, was ordained in the Presbyterian ministry in 1915, and during the following four years was pastor at Brevard and Davidson River, North Carolina. From 1904 to 1911 he was pastor of the Maryland Avenue Church in the City of Baltimore. Doctor Douglas came to his present work as president of the Presbyterian College of South Carolina in June, 1911. 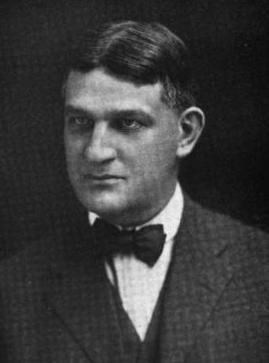