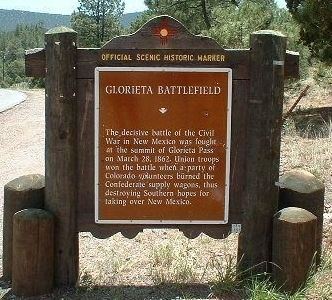 Photographed By Mike Stroud, June 2003
1. Glorietta Battlefield Marker
Inscription.
Glorieta Battlefield. . , The decisive battle of the Civil War in New Mexico was fought at the summit of Glorieta Pass on March 28, 1862. Union troops won the battle when a party of Colorado Volunteers burned the Confederate supply wagons, thus destroying Southern hopes for taking over New Mexico. . This historical marker was erected by State of New Mexico. It is in Glorieta in Santa Fe County New Mexico

The decisive battle of the Civil War in New Mexico was fought at the summit of Glorieta Pass on March 28, 1862. Union troops won the battle when a party of Colorado Volunteers burned the Confederate supply wagons, thus destroying Southern hopes for taking over New Mexico.

Erected by State of New Mexico.

Topics. This historical marker is listed in this topic list: War, US Civil. A significant historical month for this entry is March 1983.

Location. Marker has been reported permanently removed. It was located near 35° 34.479′ N, 105° 45.527′ W. Marker was in Glorieta, New Mexico, in Santa Fe County. Marker was on State Road 50, on the right when traveling west. Touch for map. Marker was in this post office area: Santa Fe NM 87501, United States of America. Touch for directions. 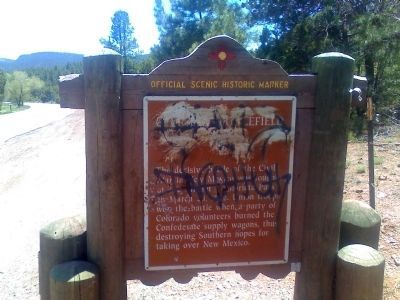 More about this marker. There is no longer a marker on this side of the road. It has been replaced by Glorieta Pass Battleﬁeld marker across the highway.

Also see . . .  Pecos National Historical Park, National Park Service website. The Civil War Battlefied is not open to the public. It is open only via a guided tour. Please contact the visitor center for more information about tour times and dates. (Submitted on March 27, 2008, by Mike Stroud of Bluffton, South Carolina.)

Additional commentary.
1. General Order No. 4 to veterans of battle of Glorietta
Head-Quarters Advance Division Army of New Mexico, Canon Glorietta, March 29, 1862. General Order No. 4.
Soldiers-You have added another victory to the long list of triumphs won by the Confederate armies. By your conduct you have given another evidence of the daring courage and heroic endurance which actuate you in this great struggle for the independence of your country. You have proven your right to stand by the side of those who fought and conquered on the red field of San Jacinto. The battle 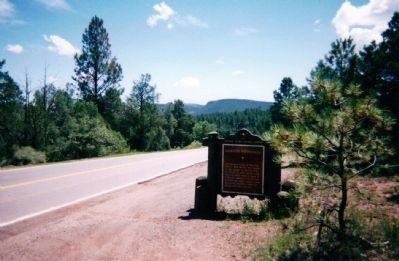 Photographed By Charles Rummel
3. Glorieta Battlefield Marker
of Glorietta- where for six long hours you steadily drove before you a foe of twice your numbers-over a field chosen by themselves, and deemed impregnable, will take its place upon the rolls of your country's triumphs, and serve to excite your children to imitate the brave deeds of their fathers, in every hour of that country's peril. Soldiers-I am proud of you. Go on as you have commenced, and it will not be long until not a single soldier of the United States will be left upon the soil of New Mexico. The Territory, relieved of the burden imposed on it by its late oppressors, will once more, throughout its beautiful valleys, "blossom as the rose," beneath the plastic hand of peaceful industry.
By order of Lieut. Col. WM. R. Scurry, Commanding. Ellsberry R. Lane, Adjutant
— Submitted April 1, 2013, by Zacharias Beau T of Alpine, Texas.

Photographed By Zacharias Beau T, May 27, 2010
4. Glorietta Pass Battlefield
On this site March 27, 1862 William R. Scurry with the 4th and 7th Texas Cavalry and a small field battery flanked the 1st Colorado commanded by Colonel John P. Slough below Glorieta Pass. It is known as Sharpshooter's Ridge.
The battle of Glorieta Pass was the high water mark of President Jefferson Davis' attempt to expand the Confederate beyond the Territory of Arizona. From San Antonio to Glorieta Pass (and back) the march of the San Antonio column was the longest of the war.
The dwelling below Sharpshooter's Ridge changed twice during the battle. It was used as a field hospital by both the Confederate and US troops.
Less than ten feet from Highway 85 the sod structure is slowly being destroyed by the relentless vibrations of passing motorists. Slowly this old field hospital is becoming a casualty itself. There are currently no state or federal attempts to preserve the over one hundred and fifty year old landmark.
Credits. This page was last revised on July 9, 2018. It was originally submitted on March 27, 2008, by Mike Stroud of Bluffton, South Carolina. This page has been viewed 3,634 times since then and 57 times this year. Last updated on July 6, 2018, by Brian Anderson of Kingwood, Texas. Photos:   1. submitted on March 27, 2008, by Mike Stroud of Bluffton, South Carolina.   2. submitted on January 9, 2011, by Zacharias Beau T of Alpine, Texas.   3. submitted on November 9, 2009, by Charles Rummel of Magdalena, New Mexico.   4. submitted on January 23, 2011, by Zacharias Beau T of Alpine, Texas. • Syd Whittle was the editor who published this page.
Share this page.