The Temple of Trajan 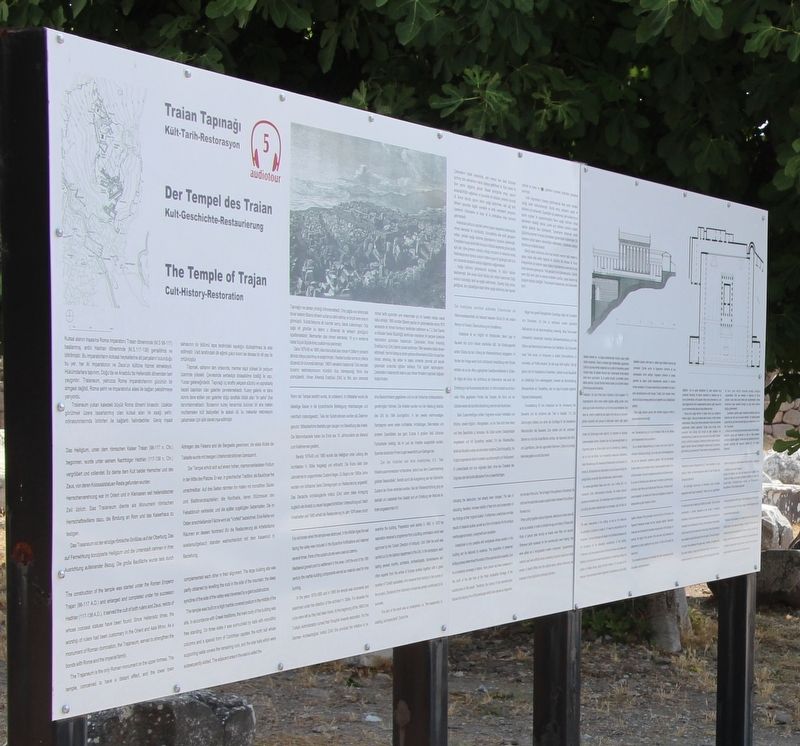 English Text on the First Panel of the Marker:

The construction of the temple was started under the Roman Emperor Trajan (98-117 A.D.) and enlarged and completed under his successor Hadrian (117 -138 A.D.). It served the cult of both rulers and Zeus, relicts of whose colossal statues have been found. Since Hellenistic times, the worship of rulers had been customary in the Orient and Asia Minor. As a monument of Roman domination, the Trajaneum, served to strengthen the bonds with Rome and the Imperial family.

The Trajaneum is the only Roman monument on the upper fortress. The temple, conceived to have a distant effect, and the lower town complemented each other in their alignment. The large building site was partly obtained by leveling the rock in the side of the mountain; the steep syncline of the side of the valley was traversed by a giant substructure.

The temple was built on a high marble covered podium in the middle of the site. In accordance with Greek traditions, the main body of the building was free standing. On three sides it was surrounded by halls with monolithic columns and a special form 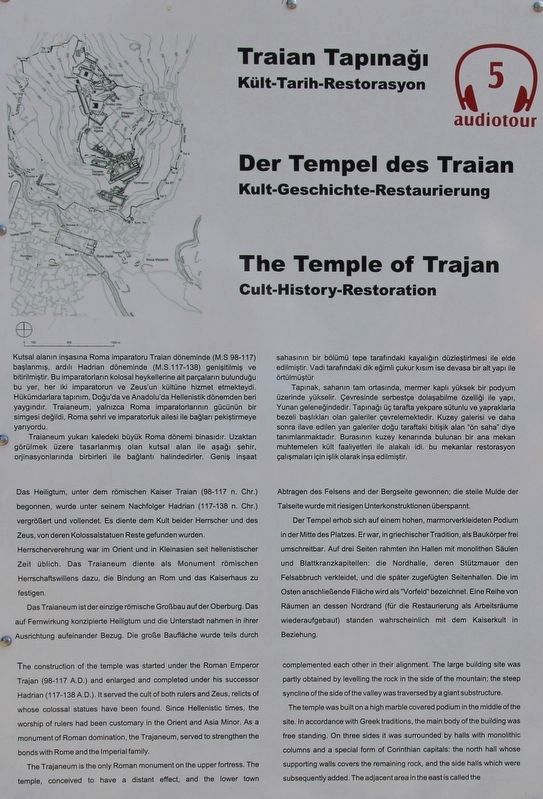 By Dale K. Benington, June 17, 2018
2. The Temple of Trajan Marker
Close up view of the first panel of the featured marker.
of Corinthian capitals: the north hall whose supporting walls covers the remaining rock, and the side halls which were subsequently added. The adjacent area in the east is called the

English Text on the Second Panel of the Marker:

It is not known when the temple was destroyed. In the Middle Ages the wall facing the valley was included in the Byzantine fortifications and restored several times. Parts of the substructures were used as cisterns.
Mediaeval graved point to settlement in this area. Until the end of the 19th century the marble building components served as material used for lime burning.

In the years 1879-1880 and in 1885 the temple was uncovered and examined under the direction of the architect H. Stiller. For decades the ruins were left as they had been found. at the beginning of the 1960's the Turkish Administration turned their thoughts towards restoration. For the German Archaeological Institut (DAI) this provided the initiative to re-examine the building. Preparation work started in 1965. In 1976 the restoration received a programme from a building commission which was approved by the Turkish Direction of Antiquity. Until 1994 the work was carried out by the Istanbul department of the DAI. In the campaigns, each lasting several months, architects, archaeologists, stonemasons and other experts from the whole of Europe 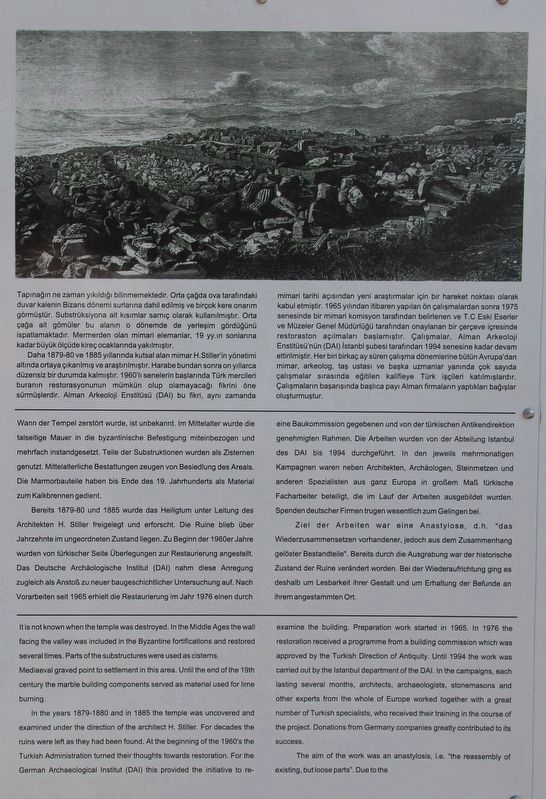 By Dale K. Benington, June 17, 2018
3. The Temple of Trajan Marker
Close up view of the second panel of the featured marker.
worked together with a great number of turkish specialists, who received their training in the course of the project. Donations from Germany companies greatly contributed to its success.

The aim of the work was an anastylosis, i.e. "the reassembly of existing, but loose parts". Due to the

English Text on the Third Panel of the Marker:

indicating the destruction, had already been changed. The task of rebuilding, therefore, involves visibility of their form and conservation of the findings at their original location. Furthermore, anastylosis provides results of classical studies, as well as a form of protection for the antique marble against erosion, overgrowth and vandalism.

Anastylosis is only possible with workpieces whose position in the building can be deduced by evidence. The proportion of preserved antique pieces determined the extent of the reconstruction possible. Due to a protective coverage of debris, more pieces had been preserved in the north of the site than at the freely accessible frontage of the substructure in the south. Therefore, the contour of the reconstruction follows the sloping line of the landscape which also serves its integration into the site of the ruins. The full height of the pediment of the temple, the north and the east halls causes a spatial relation between the buildings in the east court. 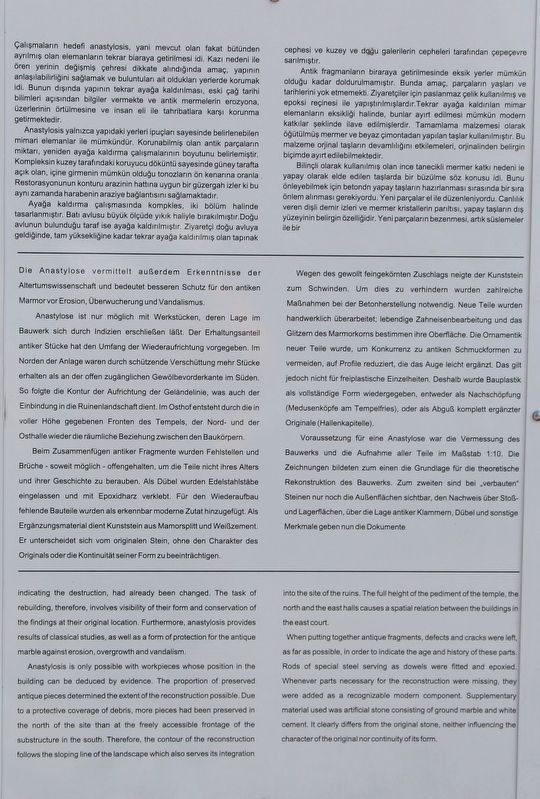 By Dale K. Benington, June 17, 2018
4. The Temple of Trajan Marker
Close up view of the third panel of the featured marker.
putting together antique fragments, defects and cracks were left, as far as possible, in order to indicate the age and history of these parts. Rods of special steel serving as dowels were fitted and epoxied. Whenever parts necessary for the reconstruction were missing, they were added as a recognizable modern component. Supplementary material used was artificial stone consisting of ground marble and white cement. It clearly differs from the original stone, neither influencing the character of the original nor continuity of its form.

English Text on the Fourth Panel of the Marker:

The exact measurement of the building, as well as the meticulous documentation of all parts on a scale of 1:10 were the preconditions for the anastylosis. The exact drawings with details of all architectural features laid the foundations for the theoretical reconstruction of the building. Furthermore, only the exposed surface of the built in stones can be seen and, therefore, only documents reveal the abutting face, the bearing surface, the position of antique clamps, plugs and other features. On the basis of the drawings, it was examined whether fragments of components could be fitted together. Because of their granulation, texture and form of the fracture, the fragments themselves showed that they belonged together. Restoration measured also influenced the theoretical reconstruction 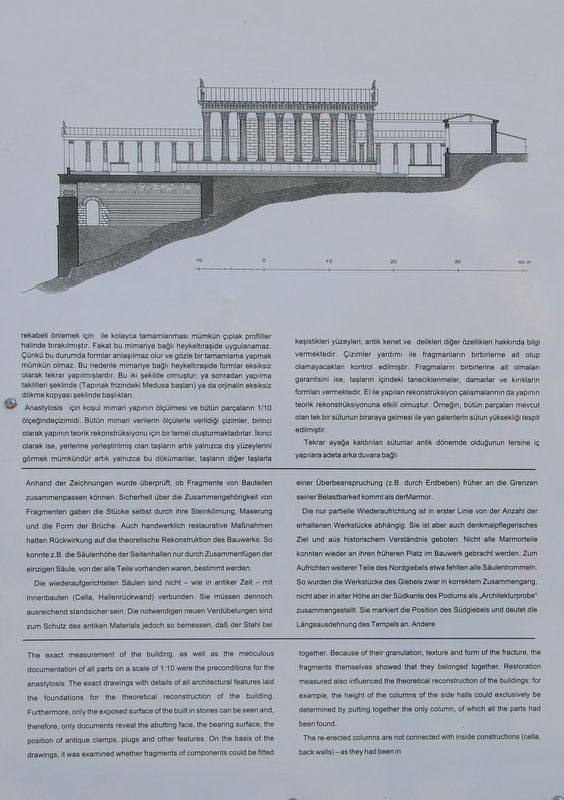 By Dale K. Benington, June 17, 2018
5. The Temple of Trajan Marker
Close up view of the fourth panel of the featured marker.
of the buildings: for example, the height of the columns of the side halls could exclusively be determined by putting together the only column, of which all the parts had been found.

The re-erected columns are not connected with inside constructions (cella, back walls) - as they had been in

English Text on the Fifth Panel of the Marker:

the steel would reach breaking point before the marble. The only partial reconstruction is primarily dependent on the number of preserved workpieces. It is also in the interest of the preservation of monuments and is necessary for an understanding of history. Not all preserved marble pieces could be returned to their former place in the building. None of the tambours were available to erect further parts of the north gable. On the south edge of the podium the workpieces of the gable were, therefore, put together with the correct cohesion, though not to the former height, thus serving as an architectural example. It marks the position of the south gable and indicates the longitudinal extent of the temple. Other workpieces and their fragments are put into types (partly in the vaults). Heaps of marble fragments point to the fate of the temple as a quarry.

Whenever it was necessary to complete the walls the antique style of building used in each case was followed. A "red joint" of tile dust serves 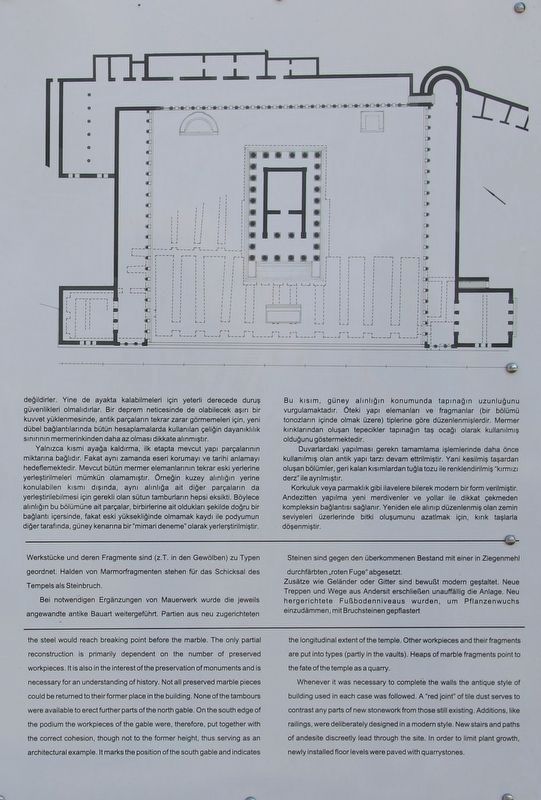 By Dale K. Benington, June 17, 2018
6. The Temple of Trajan Marker
Close up view of the fifth panel of the featured marker.
to contrast any parts of new stonework from those still existing. Additions, like railings, were deliberately designed in a modern style. New stairs and paths of andesite discreetly lead through the site. In order to limit plant growth, newly installed floor levels were paved with quarrystones.

Location. 39° 7.955′ N, 27° 11.031′ E. Marker is near Bergama, Izmir Province. Marker can be reached from Akropol Cd. just north of Kale, on the right when traveling north. This marker is situated in the Pergamum archaeological park, which is located up on the acropolis, that overlooks the residential and business districts beneath it. Touch for map. Marker is in this post office area: Bergama, Izmir Province 35700, Turkey. Touch for directions.

Other nearby markers. At least 1 other marker is within walking distance of this marker. Pergamon Acropolis (about 150 meters away, measured in a direct line).

More about this marker. I get the impression that whoever did the English portion of the text for this marker wasn't as familiar with the English language as perhaps they should have been. There is some awkward spelling and wording in the English text. Then too, the story line doesn't flow well from one panel to the next, and in at least three cases, the text on the panel ends with an incomplete sentence that does not carry over to completion in the next panel. So from my perspective, there are some problems with the both the organization, as well as with the delivery, of the English texted information provided by this marker. 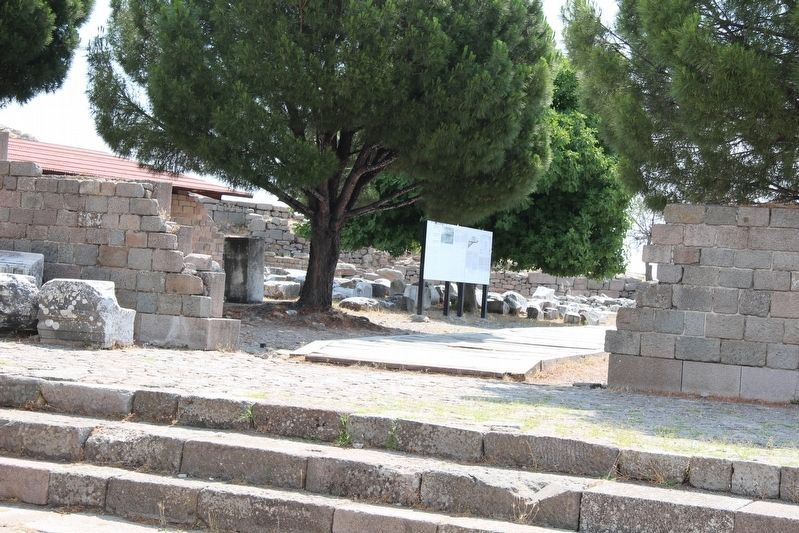 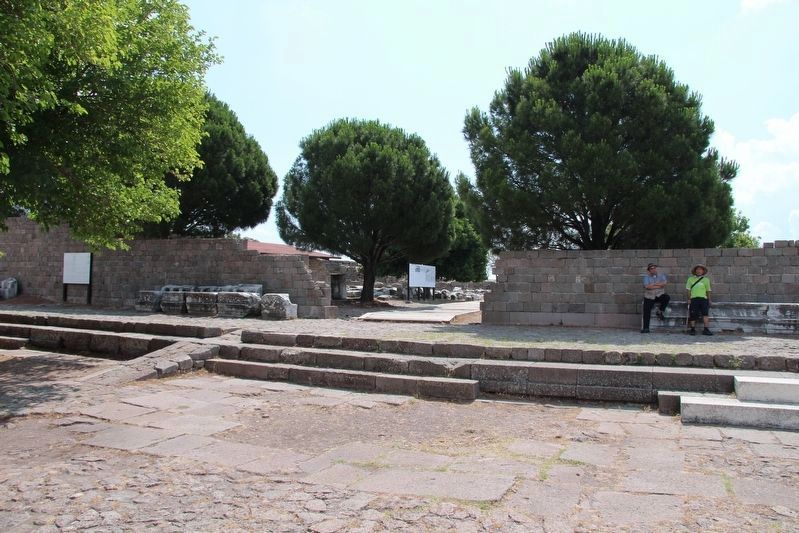 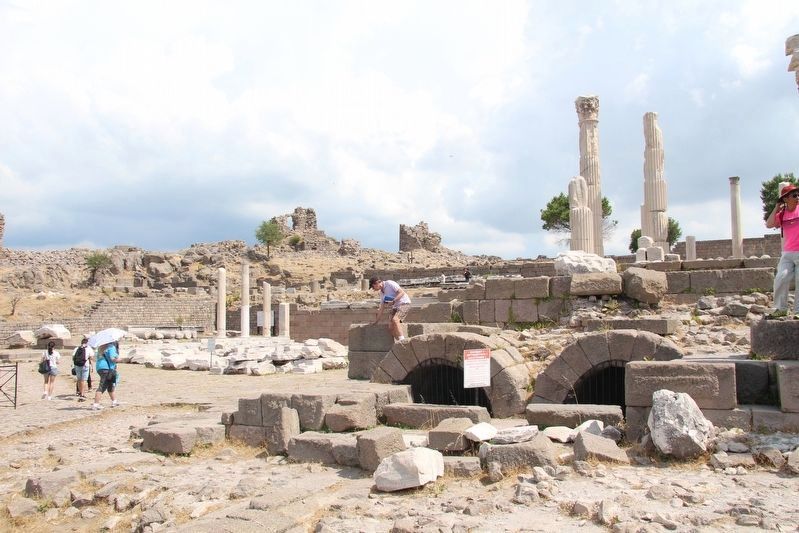 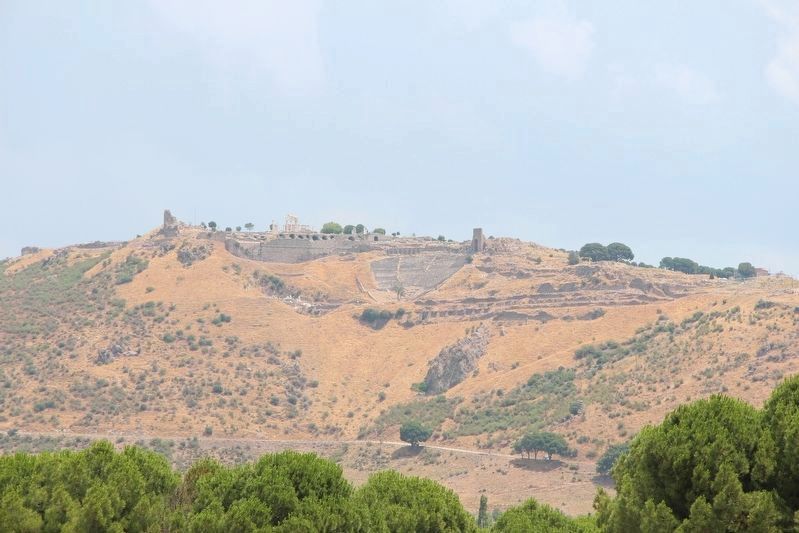