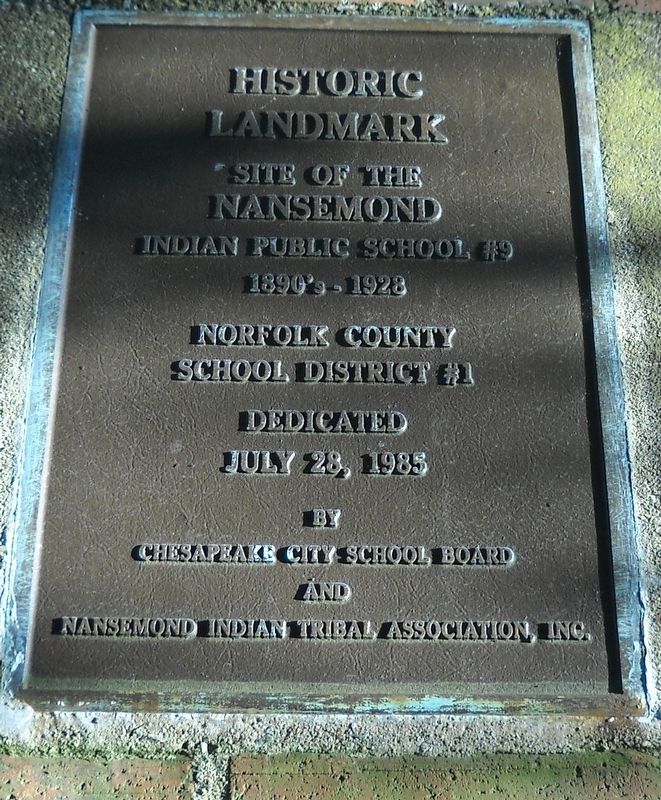 Topics. This historical marker is listed in these topic lists: Education • Native Americans.

Location. 36° 46.985′ N, 76° 24.07′ W. Marker is in Western Branch South in Chesapeake, Virginia. Marker is on Indiana Avenue south of South Military Highway (U.S. 460), on the left when traveling west. The marker stands on the grounds of the Indiana United Methodist Church. Touch for map. Marker is at or near this postal address: 4505 Indiana Avenue, Chesapeake VA 23321, United States of America. Touch for directions. 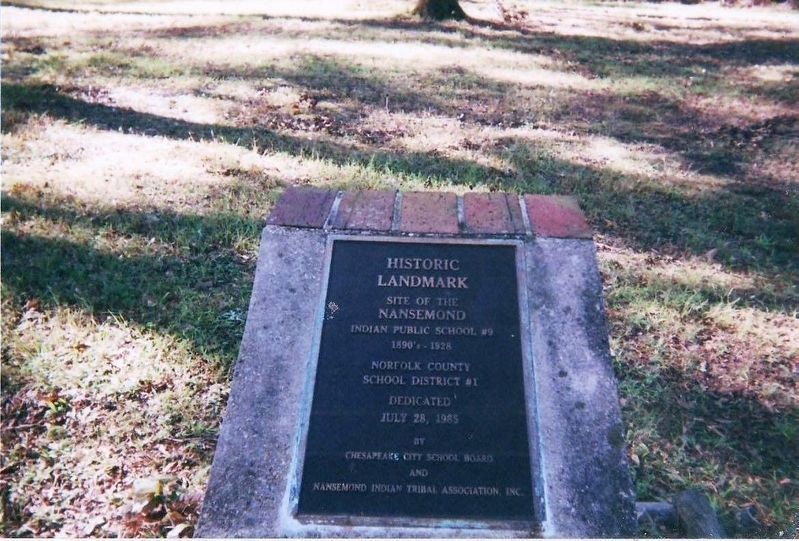 Regarding Site of the Nansemond Indian Public School #9. Revision 07/14/2018: The Nansemond Indian School commemorative landmark has two different images. One was captured in June 2017 and the other in 2011 (Exhibit A). Presumably, the latter image is its original one. See Exhibit B. It looks like the plaque from the original structure was re-mounted atop a brick and mortar base. Although an official reason for the change has not been ascertain, a probable one is that the tribe was formally recognized by the Commonwealth of Virginia in 1985.

In addition to the landmark, roadside signage in its vicinity was changed too. See Exhibit C. In 2011, the Indiana United Methodist Church sign stood planted in a tire-bed beside a Ruritan National one, at the intersection of Indiana Avenue and S. Military Highway. By 2017, the small church sign was removed. And a billboard was installed a few yards away as its replacement. The Ruritan sign was removed completely. 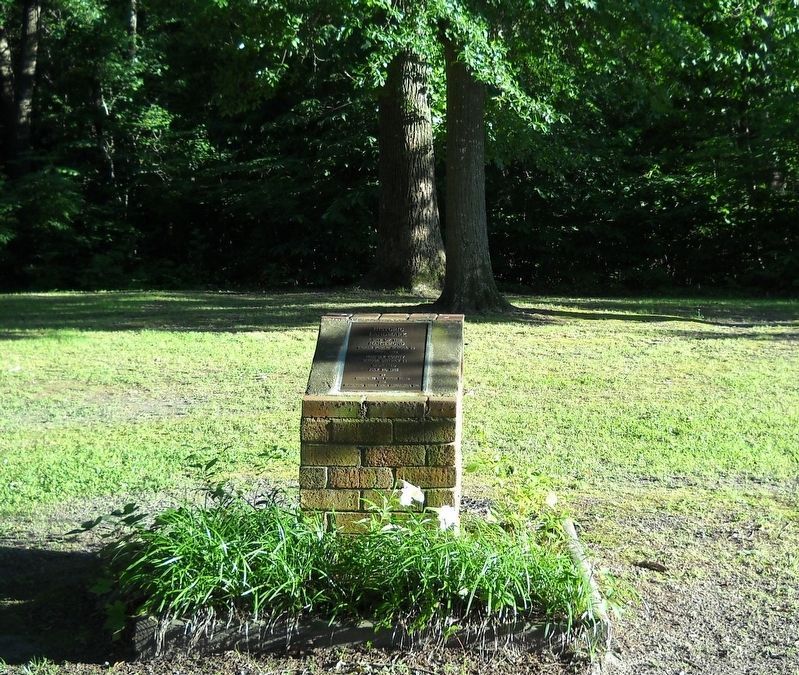 By Cynthia L. Clark, June 9, 2017
3. Nansemond Indian School Landmark, looking north.
imagery, not inscription, was changed for this landmark. As indicated by Exhibit B, a photograph of the original one was published in Suffolk: A Celebration of History by Kermit Hobbs and William A. Paquette. The school and Indiana United Methodist Church, are written about in other publications, such as Chesapeake: A Pictorial History by Charles B. Cross, Jr. and Eleanor Phillips Cross and Pocahontas’s People by Helen C. Rountree.

Erected in the Bowers Hill-Sunray area of the City of Chesapeake, the landmark currently stands on land that borders the northern end of the Dismal Swamp. When the school entered history, that land was called Norfolk County. Consequently, multiple localities can include it, the school, or church in their histories.

This seemingly innocuous commemorative in an off-the-beaten-path location represents a significant historical victory for those Nansemonds who, in the 1800-1900’s, resided in Norfolk County. They had their own school in spite of being faced with the dilemma of racial identity and segregation laws in the Commonwealth. During that era, the law required separate public schools for “whites” and “coloreds.” Most Indian tribes, however, had schools on their reservations. This group of Nansemond Indians were non-reservation liver who were considered “non-white,” which 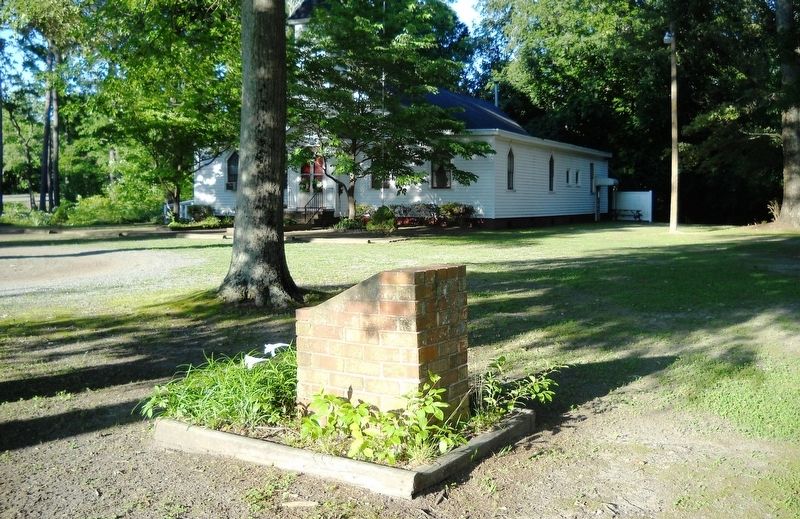 By Cynthia L. Clark, June 9, 2017
4. The view here is looking east.
Pictured in the background is Indiana United Methodist Church.
did not necessarily translate to “colored.”

Recorded history is often piecemeal. For example, the marker is inscribed with “1890’s-1928” as the school’s period of existence. According to Rountree, based on a Norfolk County Minute Book, “a small school was built for the “Nansemonds” by Norfolk County in 1889.” She also wrote that “they lost their separate school after about 1900” and that they “got their school,” in the early 1920’s. Just as there are two images of the landmark, there were also two schools as recorded by Rountree.

Hobbs and Paquette, on the other hand, gives credit to the Methodist Church for establishing a school in 1890. And the account presented by Cross and Cross does not state when the school was built or by whom. They recorded that the building was burned in 1921.

As far as the Indiana United Methodist Church is concerned, all three sources have 1850 as its date of establishment. And the establishing organization, per Cross and Cross, was the Board of Missions and Church Extension. It was initially considered a mission church, but that status was changed later.

The Nansemond Indians – a people whose name was given to a major river and a county of 423 square miles – surfaced in history with Captain John Smith in 1608. See the “Related 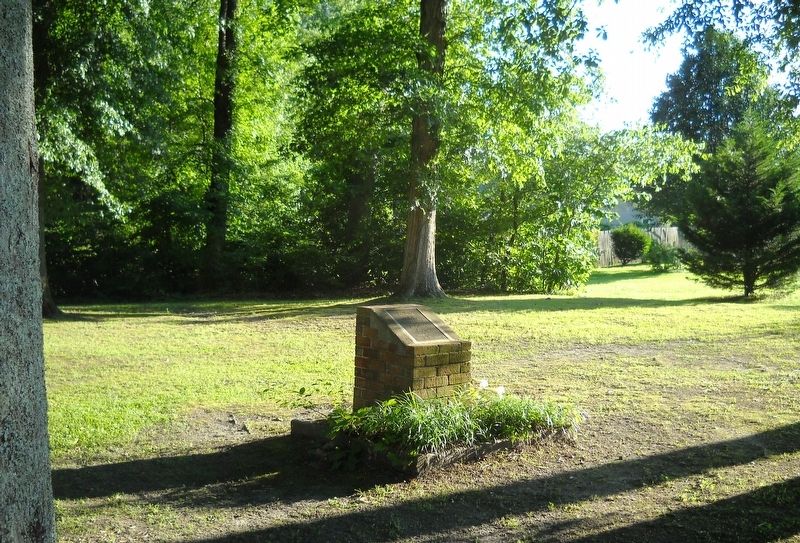 By Cynthia L. Clark, June 9, 2017
5. Looking at the marker, facing west.
Marker” section for snapshot accounts of their early history (“K-249 Dumpling Island,” “K-250 Nansemond Indian Villages,” and “John Smith Explores the Chesapeake”). Although the third marker does not specifically mention the Nansemonds, it paints a picture of the area and its inhabitants.

Related markers. Click here for a list of markers that are related to this marker. Early History of the Nansemond Indian Tribe. 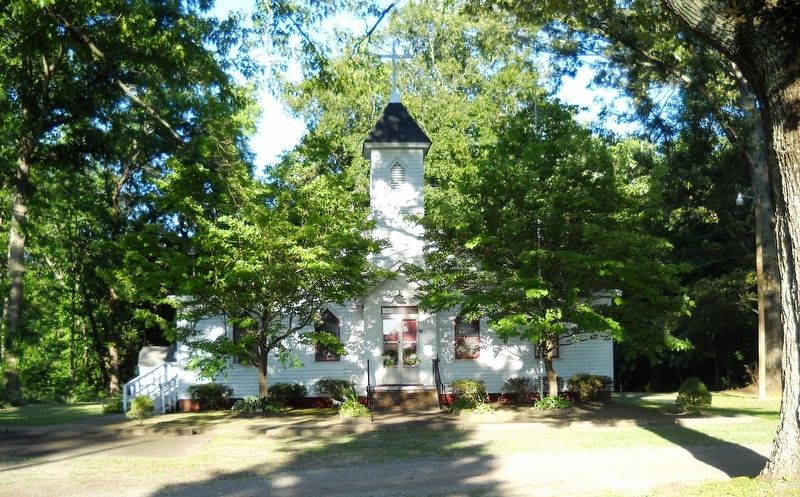 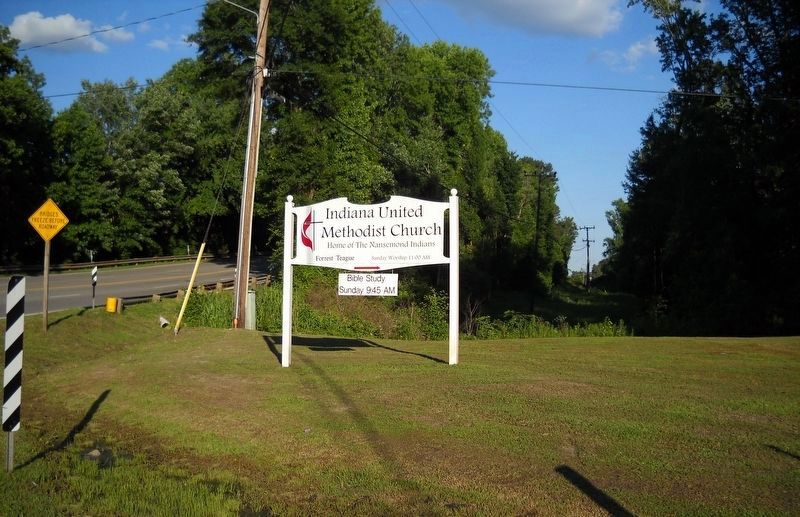 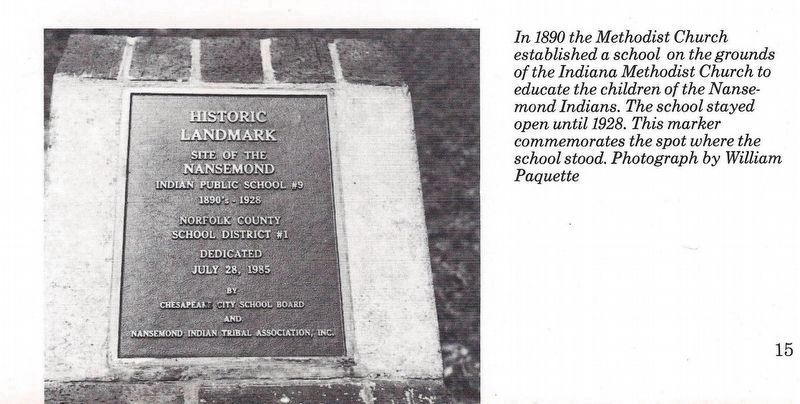 Courtesy of Suffolk: A Celebration of History, © 1987, 2006.
8. Exhibit B: Nansemond Indian Public School #9 marker.
This image is on page 15 of the book by Kermit Hobbs and William A. Paquette. The caption essentially states that the Methodist Church established the school in 1890 and that the “marker commemorates the spot where the school stood”. 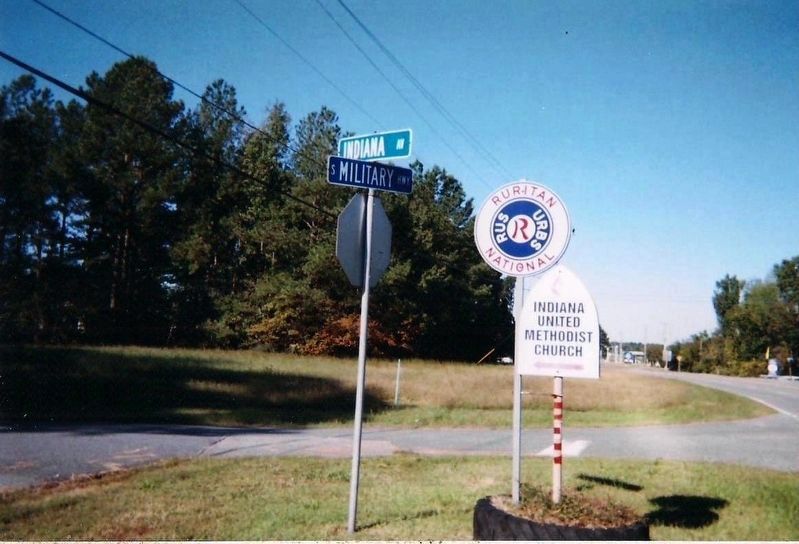