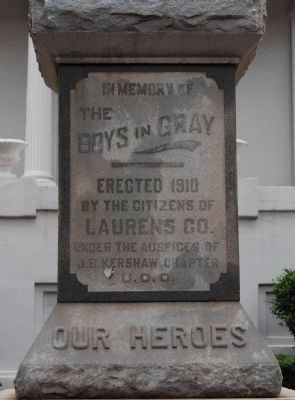 [Reverse]:
On flames eternal camp-
ing ground
Their silent tents are
spread
And glory guards with
solemn round
The bivouac of the dead.

Erected 1910 by Citizens of Laurens County and the Joseph Brevard Kershaw Chapter, U.D.C.

Topics and series. This historical marker and monument is listed in these topic lists: Heroes • Military • War, US Civil. In addition, it is included in the United Daughters of the Confederacy series list. A significant historical year for this entry is 1910. 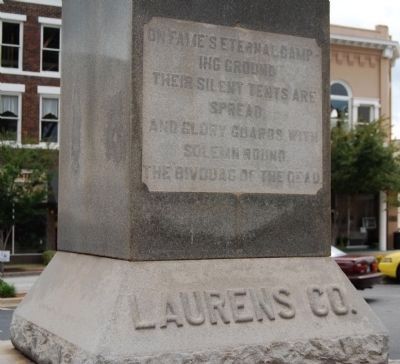 Click or scan to see
this page online
Streets. Touch for map. Marker is in this post office area: Laurens SC 29360, United States of America. Touch for directions.

More about this monument. The inscription on the reverse side comes from a poem (linked to below) by Theodore O'Hara entitled "Bivouac Of The Dead". The poem was written in memory of Kentucky soldiers who died during the Mexican War.

Also see . . .
1. Bivouac Of The Dead. The Bivouac of the Dead is a poem written by Theodore O'Hara to honor his fellow soldiers from Kentucky who died in the Mexican-American War. (Submitted on October 3, 2008, by Brian Scott of Anderson, South Carolina.)

Additional commentary.
1. Theodore O'Hara
Born in Danville, Kentucky in 1820, Theodore O'Hara served as captain and assistant quartermaster with the Kentucky volunteers during that war and later volunteered to lead a contingent of Kentucky soldiers during the 1850 expedition to free Cuba, where he was severely wounded. While he recuperated, he became involved in journalism and edited a newspaper in Louisville. Military life still beckoned and he joined the US Army in 1855, serving for a year with the 2nd US Cavalry.

In 1856, O'Hara moved to Mobile, Alabama, where he became editor of the Mobile Register until the outbreak of the Civil War. He raised the "Mobile Light Dragoons" in the city and was elected company captain, before joining the 12th Alabama Volunteer Infantry where he rose to the rank of lieutenant colonel. He later served on the staff of General Albert Sidney Johnston and General John Breckenridge. After the war, O'Hara became a merchant in the cotton business until wiped out by a devastating fire. He retired to a friend's plantation in Alabama where he died in 1873 from malaria. The following year, his remains were re-interred in the military 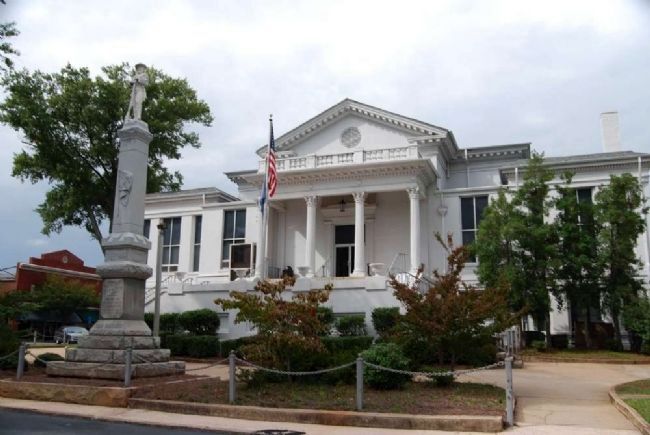 Photographed By Brian Scott, September 27, 2008
4. Laurens County Confederate Monument and Courthouse
cemetery in Frankfort, Kentucky. (Source: NPS)
— Submitted October 3, 2008, by Brian Scott of Anderson, South Carolina.
2. Laurens County Confederate Monument
At a local reunion of Laurens County veterans in 1907, the old soldiers proposed commemorating the deeds of the Southern soldier by erecting a monument. Mrs. Robert B. Bell accepted for the women of the J.B. Kershaw Chapter, D.C., the task of inaugurating and carrying out the movement to raise the funds. The people of Laurens donated the money. The National Marble Company of Marietta, Georgia, provided the stone for the thirty-two-foot monument. The lower section is made of light gray Winnsboro granite. The statue of the private soldier at parade rest is made of delicately carved white Vermont marble.

The U.D.C. and the citizens of Laurens County unveiled the monument on September 28, 1910, on the Laurens County Courthouse square. The entire city was decorated, and two thousand people, including three hundred veterans, attended the unveiling. The gala occasion started at 9:00 a.m. with an automobile parade of veterans. The old soldiers then formed a line of double ranks at City Hall and, led by the Newberry Concert Band, proceeded around the square to the monument. As the veterans marched along the western side 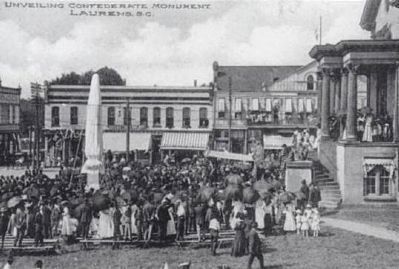 Laurens County by Laurens County Museum Association, 1910
5. Laurens County Confederate Monument Dedication Ceremony
of the square, an escort of schoolchildren joined them, causing many of them to shed tears. The scarred battle flag of the 3rd S.C. Volunteer Regiment, in which many men from Laurens served, flew at the head of the parade.

Reverend W.E. Thayer, D.D., pastor of the First Baptist Church, opened the ceremony with a prayer. The master of ceremonies, Claudius Cyprian Featherstone, a prominent Laurens lawyer, welcomed the crowd. On behalf of the men of the community, he thanked the noble women for leading the movement that resulted in the erection of the monument. After the Newberry Band played patriotic music, Featherstone introduced Governor Martin F. Ansel, the speaker of the day. Ansel praised the Southern soldiers and the women who supported them during and after the war. He said of the monument, "Guard it well. See that it is protected. See that it is cared for, and God bless you all." Governor Ansel then gave the signal to thirteen little girls to draw the cords to unveil the monument. The old soldiers gave a rebel yell, and the crowd joined in. A group of Laurens schoolchildren, accompanied by the band, sang "Dixie." The children then sang "Maryland," after which

Robert Archer Cooper, a Laurens lawyer and legislator, gave the acceptance speech on behalf of the veterans. The monument, he declared, was to perpetuate the type of man that Laurens sent to the war. 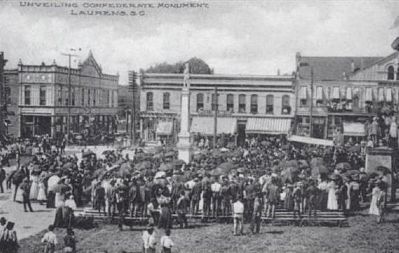 Laurens County by Laurens County Museum Association, 1910
6. Laurens County Confederate Monument Dedication Ceremony
He recounted the deeds of many of Laurens' more prominent war heroes. The children then sang "The Bonnie Blue Flag," and Featherstone presented Dr. Lee Davis Lodge, the orator of the day. Lodge was president of Limestone College and a distinguished poet and orator. He said, "...the real monument is not this beautiful creation of stone, but our love and devotion and we should in our private life and our public careers so emulate the virtues of the Confederate soldier that the civilized world may admire those whom we have chosen as our models." Dr. Lodge gave an extensive defense of the South's antebellum position. The ceremonies closed with the ladies of Clinton's Stephen D. Lee V.D.C. Chapter placing a wreath of flowers at the base of the monument. After the ceremony, the Newberry Concert Band gave a delightful concert in the courthouse square. The ladies gave a dinner for the veterans. (Source: A Guide to confederate Monuments in South Carolina: "Passing the Silent Cup" by Robert S. Seigler (1997) pg 395-397.)
— Submitted October 17, 2009, by Brian Scott of Anderson, South Carolina.
3. Laurens County Courthouse
Designed by architect Thomas C. Veal and built by Dr. John Wells Simpson, residents of Laurens, the central portion of the Laurens County Courthouse was constructed 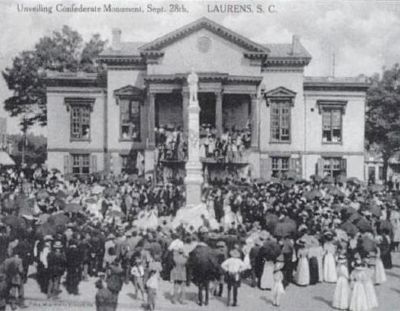 Laurens County by Laurens County Museum Association, 1910
7. Laurens County Confederate Monument Dedication Ceremony
in 1837-38. Primary construction materials were granite ashlar and brick. The original projecting porticoes in the front (NW) and rear (SE) have four Corinthian columns and two simple pilasters supporting entablatures consisting of boxed cornices, modillions, dentils, and simple medallions upon the frieze. In 19ll carved granite balustrades replaced the wrought iron grill enclosing the flat roofs of the porticoes. Originally the porticoes were mounted upon an arcaded basement which has since been hidden by the addition of Palladian stairways in 1911.

The initial construction involved a simple cruciform plan with a low gabled roof. In the center of each gable is a circular louvre. The roof line is emphasized by boxed cornices with heavy dentil work. The motif of returning cornices in the gables is accented on the front (NW) and rear (SE) facades by eight triangular pediments supported by consoles over pairs of sash windows with mullions. The original second story pairs of windows with mullions, which were triple hung sash (4/4/4) windows, were replaced in 1911 by shorter single light over single light sash windows with transom bar and transom extending over each pair. The front and rear entrances are framed by paneled pilasters carrying an entablature. Over each set of double doors is a transom with vertical and diagonal mullions.

The original plan called for 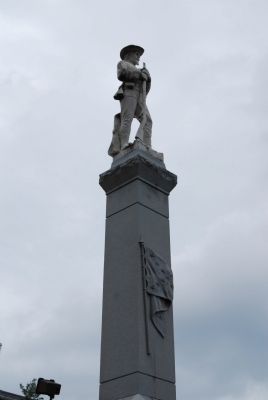 Photographed By Brian Scott, September 27, 2008
8. Laurens County Confederate Monument
wings to the northeast and southwest which were added in 1858. The parapets of the wings incorporate&the portico entablature design of dentils over simple medallion The original wings form the central portion of the present wings. The original northeastern and southwestern facades, covered by additions in 1911 each contained one pair of mullion windows with triple sash (4/4/4). Accenting the horizontal roof line were granite shelves supported by consoles over each window. The northwestern and southeastern facades of the 1858 wings are still visible. Four Tuscan pilasters support the entablature and separate three mullion windows, which were initially like other second story windows. Originally a long shelf extended over all three pairs of windows, again accenting the horizontal roof line of the wings. String course separating the first and second stories was continued in the 1858 additions and contained pairs of triglyphs with guttae at regular intervals and pedimented shelves supported by consoles over two first floor entrances. Transoms with vertical and diagonal mullions repeated over these doorways.

In 1911 further additions were made to the wings, the windows remodeled, and the Palladian stairways added. Also at this time the low elliptical dome was constructed. In 1940, although no noticeable exterior alterations were made, remodeling and repairs were performed as a W.P.A. project. A new roof with skylights and interior steel supports was added and office rearrangements made.

Political
Laurens County is one of several counties carved out of the Old-Ninety-Six District of South Carolina by an act of The General Assembly in 1785. The Courthouse stands on a portion of the four acre tract which was deeded to the county in 1792 and was the site of two earlier courthouses between 1792 and 1838. The present courthouse has served as the political hub of Laurens County for the past 144 years. The Courthouse contains the office of the first woman (Miss Jeannie V. Culbertson) to be publicly elected to a governmental position in the state of South Carolina.

Architectural
The Laurens County Courthouse represents an excellent example of Greek revival architecture in rural South Carolina/ The massiveness and the decorative elements attest to the affluence of pre-Civil War South Carolina. The Courthouse is the focal point of a town that is historically important but where visual history has been neglected until recently. The Courthouse is an important part of Laurens County's current revitalization project for the town square and businesses of Laurens. There is a great deal of interest in this project with its concern for good urban planning coupled with proper attention to historic preservation. Considerable matching funds are available, and since it is hoped that the restoration will follow approved restoration techniques, National Register status is essential. (Source: National Register nomination form.)
— Submitted October 17, 2009, by Brian Scott of Anderson, South Carolina.
4. Smithsonian Institution Research Information System (SIRIS) entry
Inventories of American Painting and Sculpture, Smithsonian American Art Museum, Washington, D.C.
Laurens County Confederate Monument
Control Number: IAS SC000117
Figure: approx. 5 x 2 x 2 ft.; Base: approx. 20 x 12 x 12 ft.
Figure of Confederate soldier dressed in uniform and hat standing at rest on top of tall base. He holds the barrel of a rifle with both hands, the butt resting in front of his proper right foot. The back of his proper right leg rests against what appears to be a tree stump. The front upper base is decorated with a relief of a Confederate flag. The bottom of base is stepped.