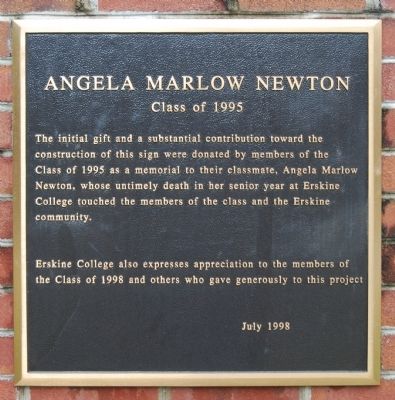 The initial gift and a substantial contribution toward the construction of this sign were donated by members of the Class of 1995 as a memorial to their classmate, Angela Marlow Newton, whose untimely death in her senior year at Erskine College touched the members of the class and the Erskine community.

Erskine College also expresses appreciation to the members of the Class of 1998 and others who gave generously to this project.

Topics. This historical marker is listed in this topic list: Education. A significant historical year for this entry is 1995.

Location. 34° 19.917′ N, 82° 23.133′ W. Marker is in Due West, South Carolina, in Abbeville County. Marker is at the intersection of College Street (State Highway 186) and Alexander Street, on the right when traveling north on College Street. Touch for map. Marker is in this post office area: Due West SC 29639, United States of America. Touch for directions.

Other nearby markers. At least 10 other markers are within 4 miles of this marker, measured as the crow flies. Rev. J.I. Bonner Monument (about 400 feet away, measured in a direct line); Due West (approx. 0.2 miles away); Erskine College 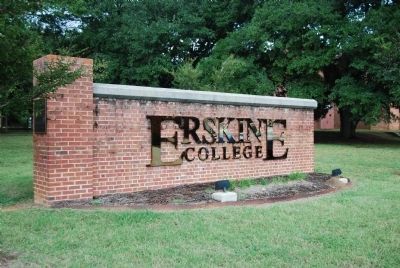 Photographed By Brian Scott, September 27, 2008
2. Erskine College Sign
Angela Marlow Newton Marker is located on the exterior side of the left post. The sign is about midway between the intersections of College and Alexander Streets and College and Haynes/Mill Streets, on the right when heading north.