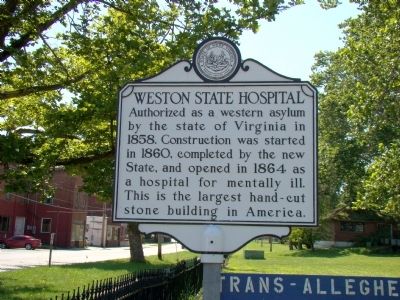 Photographed By J. J. Prats, July 15, 2008
1. Weston State Hospital Marker
Inscription.
Weston State Hospital. . Authorized as a western asylum by the state of Virginia in 1858. Construction was started in 1860, completed by the new State, and opened in 1864 as a hospital for mentally ill. This is the largest hand-cut stone building in America. . This historical marker is in Weston in Lewis County West Virginia

Authorized as a western asylum by the state of Virginia in 1858. Construction was started in 1860, completed by the new State, and opened in 1864 as a hospital for mentally ill. This is the largest hand-cut stone building in America.

Topics and series. This historical marker is listed in these topic lists: Charity & Public Work • Science & Medicine. In addition, it is included in the West Virginia Archives and History series list. A significant historical year for this entry is 1858.

Other nearby markers. At least 8 other markers are within walking distance of this marker. A different marker also named Weston State Hospital (about 700 feet away, measured in a direct line); Trans-Allegheny Lunatic Asylum (approx. 0.2 miles away); Historic Edmiston-Ralston Building (approx. 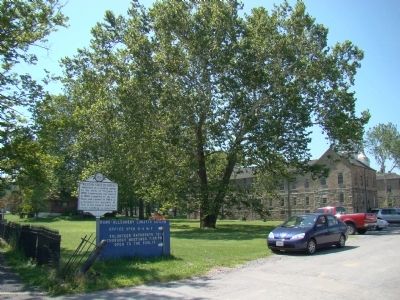 Photographed By J. J. Prats, July 15, 2008
2. Weston State Hospital Marker
This marker is at the back entrance to the hospital grounds. This is the entrance for tours.

Regarding Weston State Hospital. This may be the second largest hand-cut stone building in the world, with the Kremlin in Moscow being the largest. Use the map link, switch to the satellite view, and zoom in to see the whole building.

The hospital was closed in 1994 and quickly fell into disrepair. It was purchased in 2007 to a businessman who plans to turn the buildings and grounds into a resort. Meanwhile he has opened the hospital to the public to tour ($30 entry fee), calling it the Trans-Allegheny Lunatic Asylum. 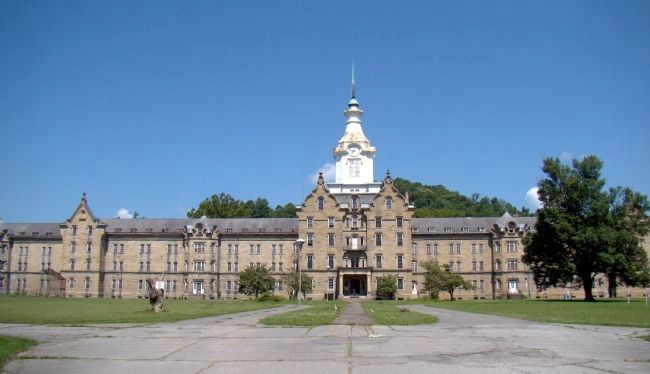 Photographed By J. J. Prats, July 15, 2008
3. Weston State Hospital Main Entrance
The building continues to the left and to the right. It faces South River Avenue, the railroad tracks, and the West Fork River that runs through Weston. A footpath to downtown Weston crosses the river behind the photographer. U.S. 33 is to the right. The railroad station was diagonally across U.S. 33 and River Avenue.
“Essential to the realization of [Dr. Thomas Story Kirkbride’s] vision was moving patients from overcrowded city jails and almshouses, where patients were often chained to walls in cold dark cells, to a rural environment with grounds that were ‘tastefully ornamented’ and buildings arranged ‘en echelon’ resembling a shallow V if viewed from above. This design called for long, rambling wings, that provided therapeutic sunlight and air to comfortable living quarters so that the building itself promoted a curative effect, or as Kirkbride put it, ‘a special apparatus for lunacy.’ These facilities were designed to be entirely self-sufficient providing the patients with a variety of outlets for stimulating mental and physical activities.” (Submitted on October 5, 2008.)

2. Haunting History at an Old W.Va. Hospital. 2008 article by Kathy Legg in The Washington Post. “It rose up out of nowhere. The looming clock tower was like an apparition from some other place and time, and I risked wrecking my car to get a better look at the mammoth stone building atop which it stood. What was this place? And how could I get inside for a closer look? What had been a spur-of-the-moment side trip on the back roads of West Virginia was about to get more than a little strange.” Includes a two minute video tour. (Submitted on October 5, 2008.)
Credits. This page was last revised on June 16, 2016. It was originally submitted on October 5, 2008, by J. J. Prats of Powell, Ohio. This page has been viewed 1,475 times since then and 27 times this year. Photos:   1, 2, 3. submitted on October 5, 2008, by J. J. Prats of Powell, Ohio.
Share this page.