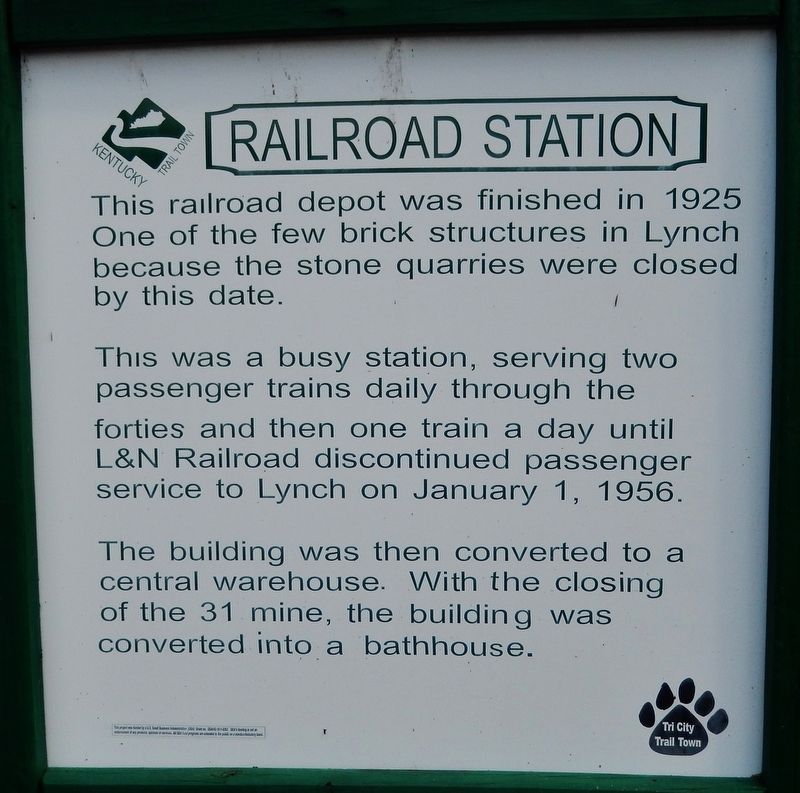 Photographed By Cosmos Mariner, September 20, 2017
1. Railroad Station Marker
Inscription.
Railroad Station. . This railroad depot was finished in 1925. One of the few brick structures in Lynch because the stone quarries were closed by this date. , This was a busy station, serving two passenger trains daily through the forties and then one train a day until L&N Railroad discontinued passenger service to Lynch on January 1, 1956. , The building was then converted to a central warehouse. With the closing of the 31 mine, the building was converted into a bathhouse. . This historical marker is in Lynch in Harlan County Kentucky

This railroad depot was finished in 1925. One of the few brick structures in Lynch because the stone quarries were closed by this date.

This was a busy station, serving two passenger trains daily through the forties and then one train a day until L&N Railroad discontinued passenger service to Lynch on January 1, 1956.

Topics. This historical marker is listed in these topic lists: Industry & Commerce • Railroads & Streetcars. A significant historical year for this entry is 1925. 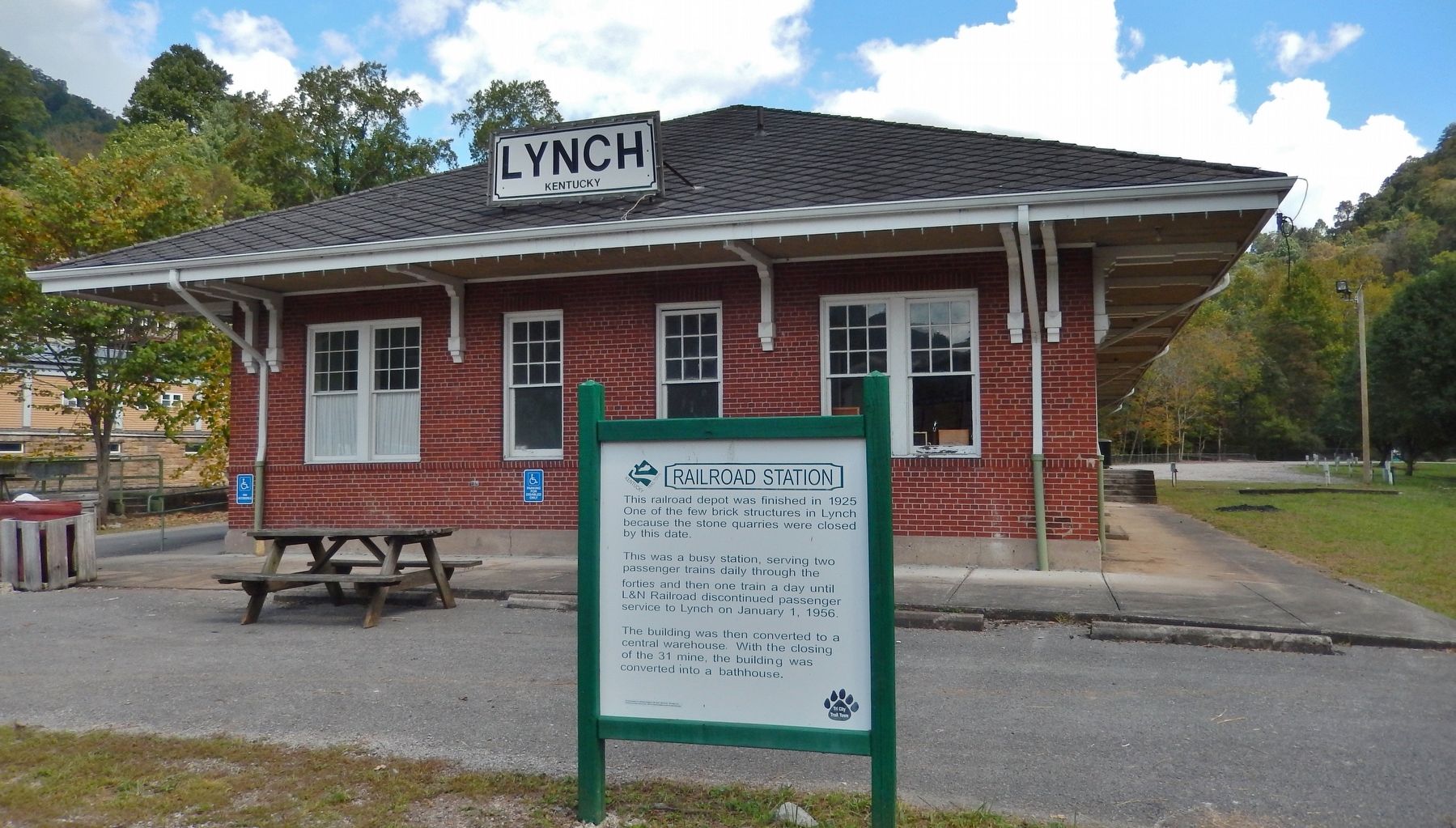 More about this marker. This is a large, painted metal, "billboard-style" marker.

Related markers. Click here for a list of markers that are related to this marker. Portal 31 Exhibition Mine, Lynch, Kentucky

Also see . . .  Louisville and Nashville Railroad (Wikipedia). The Louisville and Nashville Railroad (reporting mark LN), commonly called the L&N, was a Class I railroad that operated freight and passenger services in the southeast United States. Chartered by the Commonwealth of Kentucky in 1850, the road grew into one of the great success stories of American business. Operating under one name continuously for 132 years, it survived civil war and economic depression and several waves of social and technological change. Since all locomotives of the Gilded Age were steam-powered, many railroads had favored coal as their engines' fuel source after wood-burning 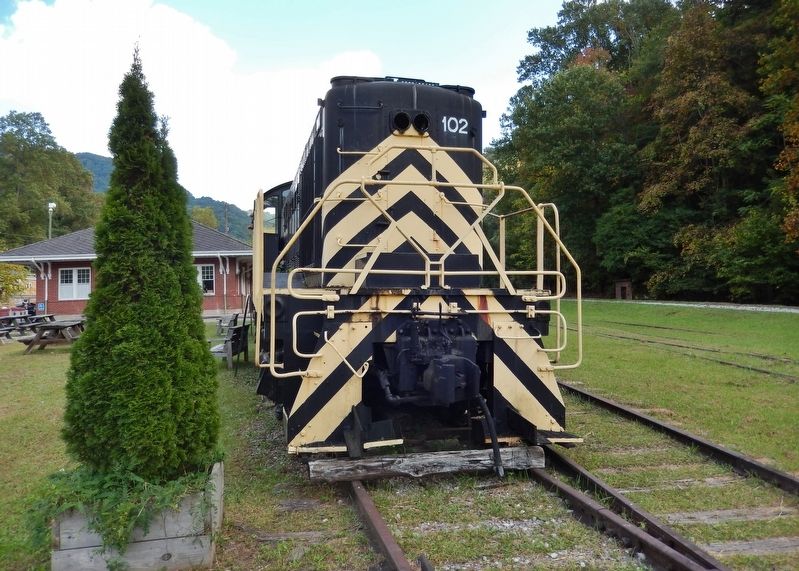 Photographed By Cosmos Mariner, September 20, 2017
3. US Steel Locomotive with Lynch Railroad Station background
models were found unsatisfactory. The L&N guaranteed not only its own fuel sources but a steady revenue stream by pushing its lines into the difficult but coal-rich terrain of eastern Kentucky. (Submitted on August 17, 2018, by Cosmos Mariner of Cape Canaveral, Florida.)

Additional commentary.
1. Once upon a time, you could travel to anywhere by rail from this railroad station
Lynch was the last stop on the L&N branch line from Pineville. Pineville was a junction on L&N’s Cumberland Valley Division whose primary line that ran from Corbin to Middlesboro, near the Cumberland Gap. Corbin was on the L&N main line between Louisville and Atlanta via Knoxville.

At Corbin, the morning traveler from Lynch could catch the 4:08 p.m. train to Louisville, arriving there that evening 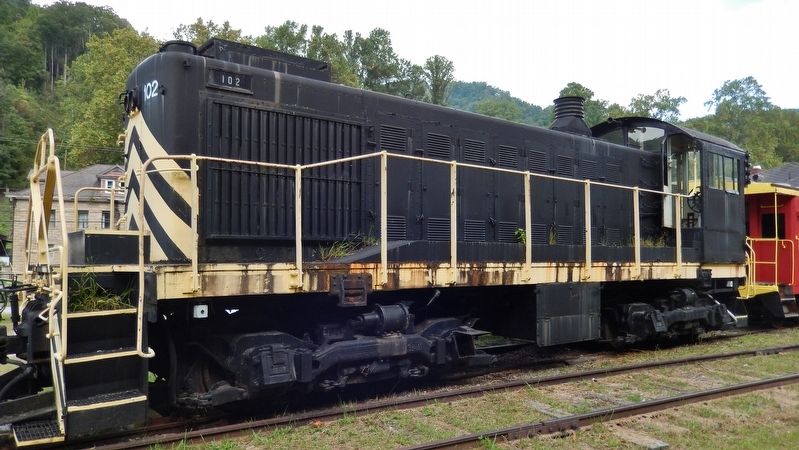 Photographed By Cosmos Mariner, September 20, 2017
4. US Steel Locomotive #102 (located near marker)
at 9:20 p.m. The afternoon traveler from Lynch took the overnight train to Louisville that stopped at Corbin at 1:47 a.m. and got to Louisville at 7:28 a.m.

If the destination was Knoxville or Atlanta, the morning traveler from Lynch would have to spend the night at Corbin and catch the 7 a.m. train the next morning, but the afternoon traveler would spend a few bleary hours in the Corbin waiting room until the train from Cincinnati to Atlanta came by at 2:31 a.m. That was Train No. 21, and on arrival at Knoxville at 5:40 a.m., a dining car would be added to serve breakfast before arriving at Atlanta at 11:35 a.m.

If you were traveling further, there were plenty of long distance trains to choose from at Atlanta and at Louisville to take you most anywhere you wanted to go in North America, including Canada and Mexico. The ticket agent at Lynch would staple together all the tickets you needed to reach your ultimate destination.
— Submitted December 31, 2020, by J. J. Prats of Powell, Ohio. 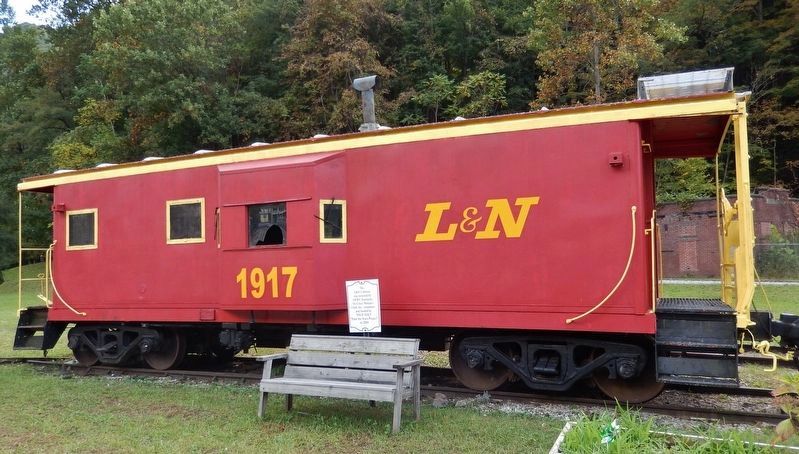