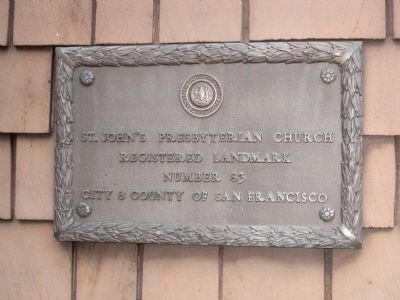 Topics and series. This historical marker is listed in these topic lists: Churches & Religion • Notable Buildings. In addition, it is included in the American Presbyterian and Reformed Historic Sites series list. 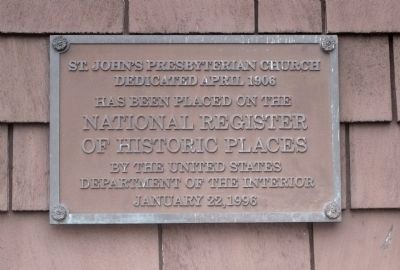 Click or scan to see
this page online
(approx. ¾ mile away); Lover’s Lane (approx. 0.8 miles away). Touch for a list and map of all markers in San Francisco.

More about this marker. The marker is to the right of the entrance on Arguello Boulevard.

Organized in 1870, St. John's occupied two houses of worship before constructing the present sanctuary on Lake Street at the turn of the 20th century. Many of its furnishings, including the pews, the pulpit, the inscribed transept arch, the Rose window, and the Johnson pipe organ, followed the congregation to each successive building. The Shingle-style church, with its imposing, square steeple tower, its steeply pitched gabled roof, and its ornamental hexagonal South tower, was completed in 1906. The first services were held on Easter Sunday. Three days later, the church 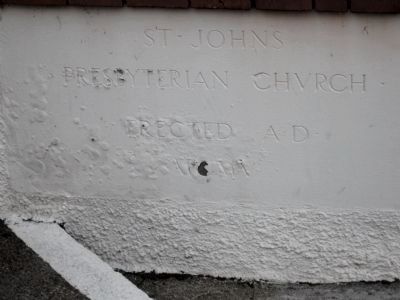 Photographed By Andrew Ruppenstein, April 18, 2009
3. Cornerstone - Laid 1905
In 1902 the congregation decided to build a new church in the western part of the city. Designed by the firm of Dodge and Dolliver, ground was broken in 1905, and the first services in the new building were held April 15, 1906.
was damaged by the earthquake of April 18, 1906, and it would be another year before the sanctuary was ready for regular use. It was formally dedicated on April 28, 1907. 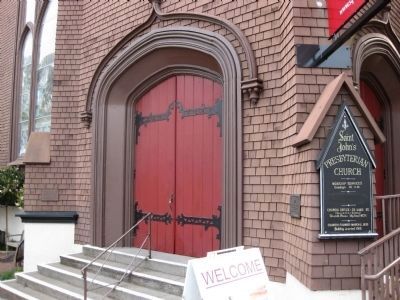 Photographed By Andrew Ruppenstein, April 18, 2009
4. St. John's Presbyterian Church - Entrance with markers to the left and right of the entrance
The Great Earthquake struck on April, 18, 1906. The heavily damaged church, repaired and reopened, and was rededicated on April 28, 1907. 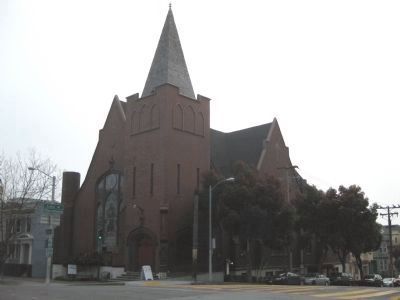