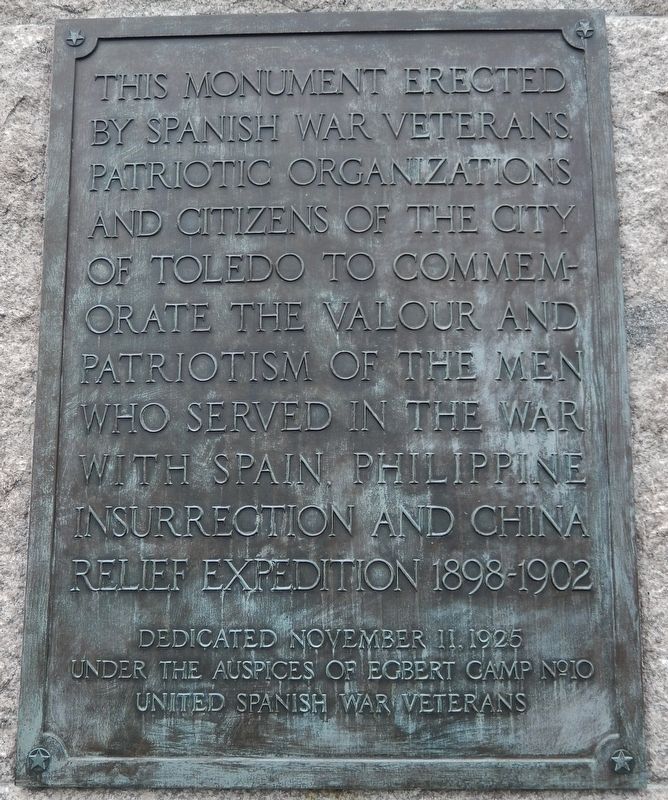 By Cosmos Mariner, July 28, 2018
1. Spanish American War Memorial Marker
Inscription.
Spanish American War Memorial. . This monument erected by Spanish War veterans, patriotic organizations and citizens of the city of Toledo to commemorate the valour and patriotism of the men who served in the War with Spain, Philippine Insurrection and China Relief Expedition 1898-1902. ,
Dedicated November 11, 1925 , under the auspices of Egbert Camp No. 10 , United Spanish War Veterans . . This memorial was erected in 1925 by Egbert Camp No. 10, United Spanish War Veterans. It is in Toledo in Lucas County Ohio

This monument erected by Spanish War veterans, patriotic organizations and citizens of the city of Toledo to commemorate the valour and patriotism of the men who served in the War with Spain, Philippine Insurrection and China Relief Expedition 1898-1902.

Dedicated November 11, 1925
under the auspices of Egbert Camp No. 10
United Spanish War Veterans

Topics. This memorial is listed in these topic lists: Patriots & Patriotism • War, Spanish-American.

Location. 41° 39.338′ N, 83° 32.21′ W. Marker is in Toledo, Ohio, in Lucas County. Memorial is on Jackson Street west of North Erie Street, on the left when traveling west. Marker, memorial and sculpture are located on the Lucas County Courthouse grounds, beside the sidewalk, directly in front of the north entrance on Jackson Street. Touch for map. Marker is at or near this postal address: 700 Adams Street, Toledo OH 43604, United States of America. Touch for directions. 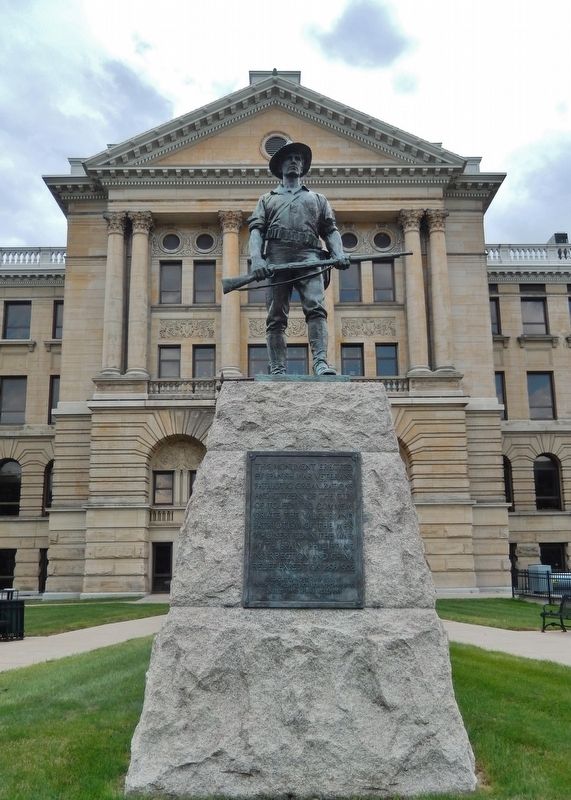 More about this memorial. The bronze statue depicts a young man in the uniform of 1898 with a rifle in his hand. The statue is 8-feel tall, and stands atop a 50-ton, 10-foot granite base.

Also see . . .
1. Recognition of service in Spanish-American War.
(This link presents a picture of the memorial and attending citizens on dedication day, Nov. 12, 1925.) It was a peculiar war, to say the least, lasting only from April 21 to Aug. 13 of 1898. The war began after an explosion on the USS Maine in Havana Harbor during the Cuban war for independence against Spain. While President William McKinley, an Ohio native, had hoped to avoid the entanglement, political pressures at home forced him to do otherwise. It would be 27 years before northwest Ohio’s contribution to the war effort was memorialized on Armistice Day — now Veterans Day — on Nov. 12, 1925. On that date, veterans from three wars — the Civil 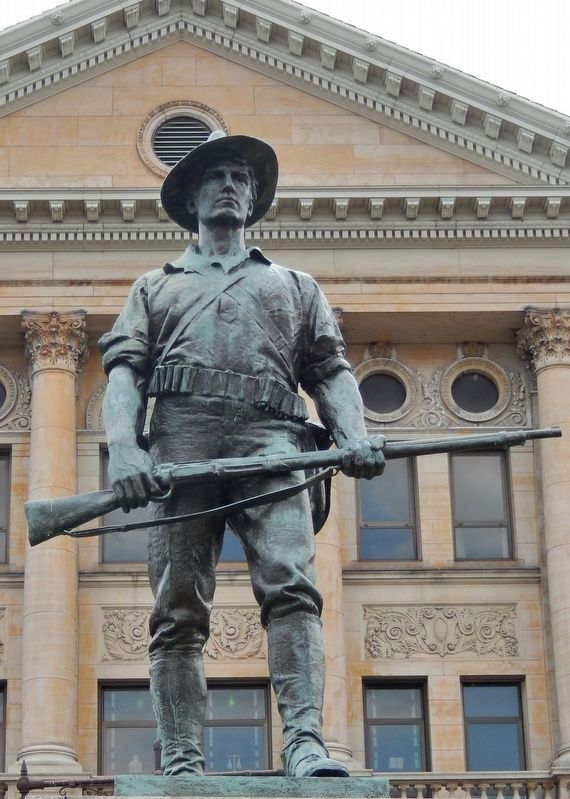 By Cosmos Mariner, July 28, 2018
3. The Hiker statue detail
War, World War I, and the Spanish-American War — gathered on the lawn of the Lucas County Courthouse to dedicate a statue to the Citizen Soldier. (Submitted on August 22, 2018, by Cosmos Mariner of Cape Canaveral, Florida.)

2. The Hiker statue. The Hiker is a statue created by Theo Alice Ruggles Kitson. It commemorates the American soldiers who fought in the Spanish–American War, the Boxer Rebellion and the Philippine–American War. The first version of it was made for the University of Minnesota in 1906, but at least 50 copies were made, and were erected very widely across the United States. (Submitted on August 22, 2018, by Cosmos Mariner of Cape Canaveral, Florida.)

3. The Spanish American War. The war originated in the Cuban struggle for independence from Spain, which began in February 1895. The growing popular demand for U.S. intervention became an insistent chorus after the still-unexplained sinking in Havana harbor of the American battleship USS Maine, which had been sent to protect U.S. citizens and property after anti-Spanish rioting in Havana. The ensuing war was pathetically one-sided, since Spain had readied neither its army nor its navy for a distant war with the formidable power of the United States. By the Treaty of Paris (signed Dec. 10, 1898), Spain renounced all claim to Cuba, ceded Guam and Puerto Rico to the United States, 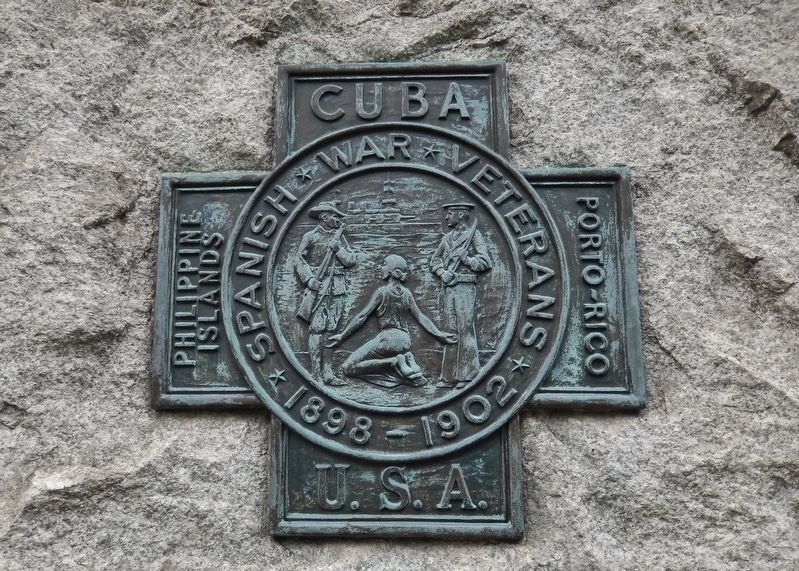 By Cosmos Mariner, July 28, 2018
4. Spanish American War Memorial Plaque (mounted on back side of the memorial pedestal)
and transferred sovereignty over the Philippines to the United States for $20 million. (Submitted on August 22, 2018, by Cosmos Mariner of Cape Canaveral, Florida.) 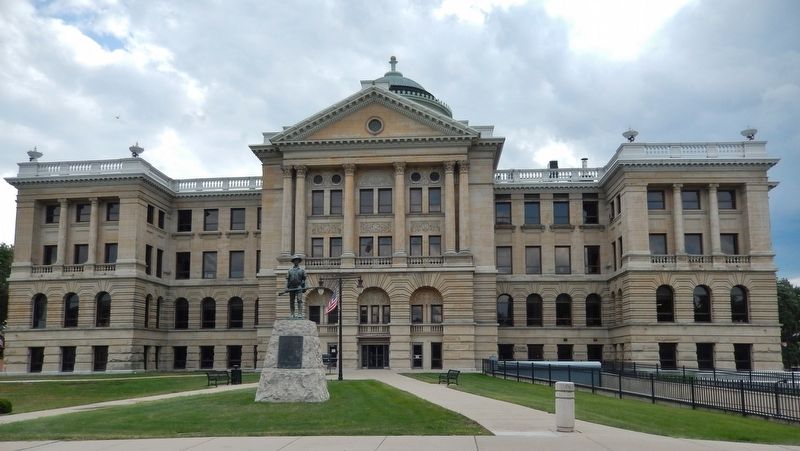 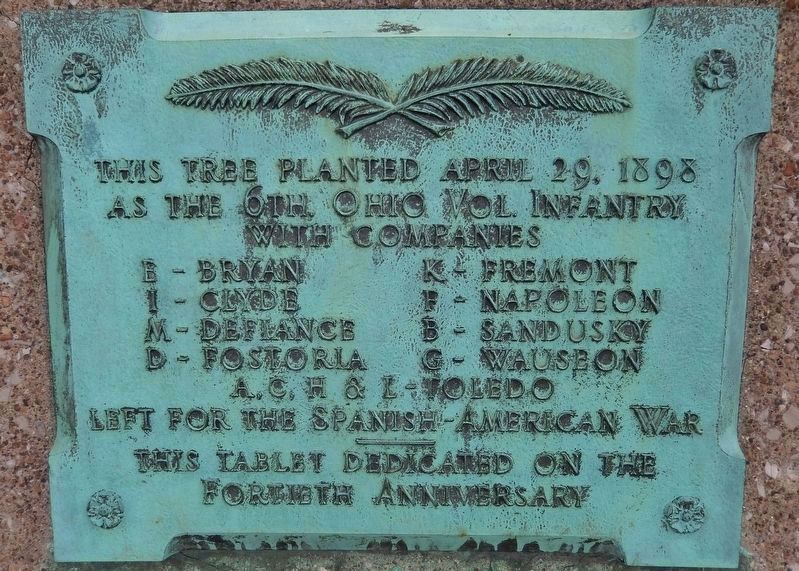 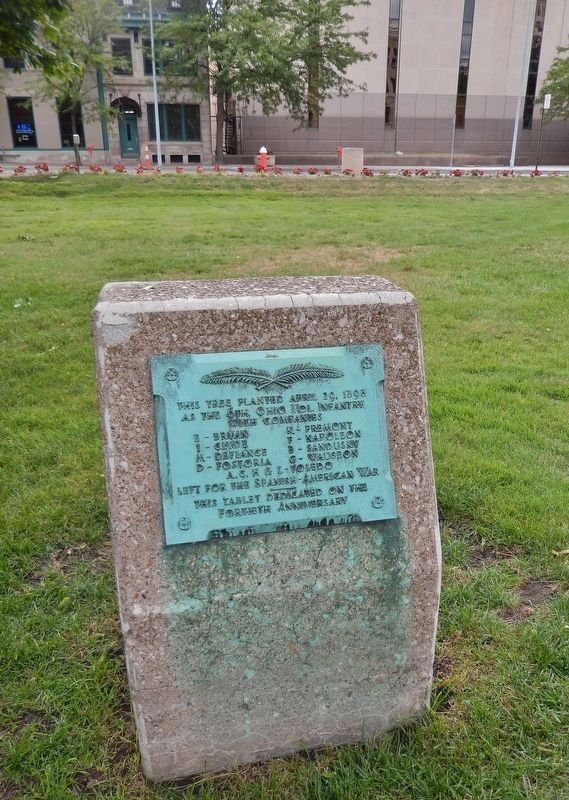 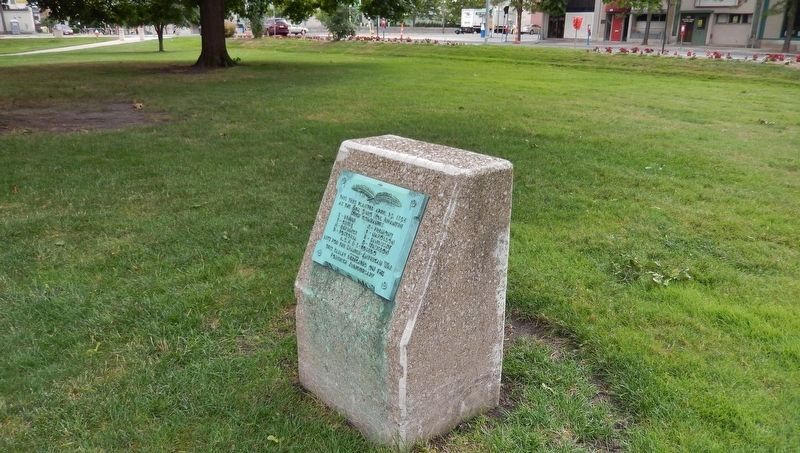