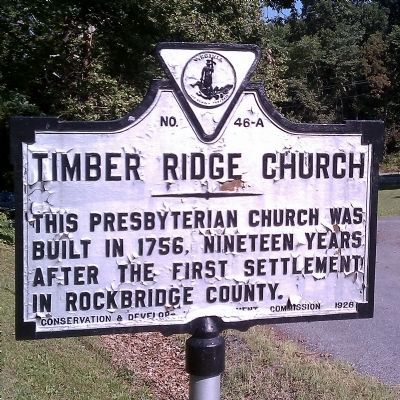 This Presbyterian Church was built in 1756, nineteen years after the first settlement in Rockbridge County.

Topics and series. This historical marker is listed in these topic lists: Churches & Religion • Settlements & Settlers. In addition, it is included in the American Presbyterian and Reformed Historic Sites, and the Virginia Department of Historic Resources series lists. A significant historical year for this entry is 1756.

Location. 37° 50.58′ N, 79° 21.488′ W. Marker is near Lexington, Virginia, in Rockbridge County. Marker is at the intersection of Timber Ridge Road (Virginia Route 716) and Sam Houston Way (Virginia Route 785), on the right when traveling east on Timber Ridge Road. This marker is located at the Sam Houston Wayside. Touch for map. Marker is in this post office area: Lexington VA 24450, United States of America. Touch for directions.

Other nearby markers. At least 8 other markers are within 4 miles of this marker, measured as the crow flies. Liberty Hall Academy (within shouting distance of this marker); Church Hill (about 300 feet away, measured in a direct line); Birthplace of Sam Houston 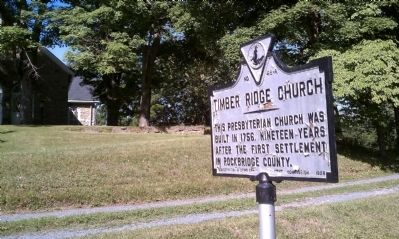 Regarding Timber Ridge Church. Timber Ridge Old Stone Presbyterian Church was listed in the National Register of Historic Places in 1969. This church is also one of 445 American Presbyterian and Reformed Historical Sites registered between 1973 and 2003 by the Presbyterian Historical Society (PHS), headquartered in Philadelphia. Approved sites received a metal plaque featuring John Calvin’s seal and the site’s registry number (PHS marker location unknown).

The following text is taken from the Presbyterian Historical Society website:
The oldest church building in Rockbridge County, Timber Ridge was one of the sites of the Academy that became Washington and Lee University. Constructed in 1756, the original stone church is now the largest part of the present sanctuary. Sam Houston, 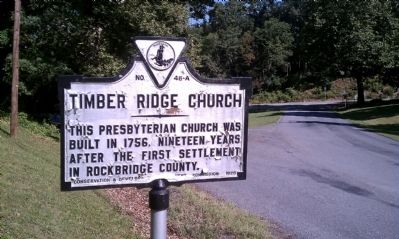 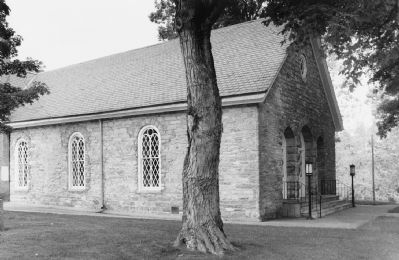