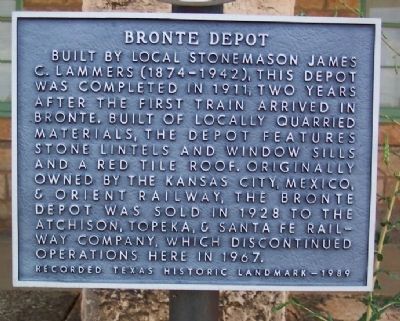 Photographed By William Fischer, Jr., July 30, 2007
1. Bronte Depot Marker
Inscription.
Bronte Depot. . Built by local stonemason James C. Lammers (1874-1942), this depot was completed in 1911, two years after the first train arrived in Bronte. Built of locally quarried materials, the depot features stone lintels and window sills and a red tile roof. Originally owned by the Kansas City, Mexico, and Orient Railway, the Bronte Depot was sold in 1928 to the Atchison, Topeka, and Santa Fe Railway Company, which discontinued operations here in 1967. , Recorded Texas Historical Landmark - 1989 . This historical marker was erected in 1989 by Texas Historical Commission. It is in Bronte in Coke County Texas

Topics. This historical marker is listed in these topic lists: Architecture • Railroads & Streetcars • Settlements & Settlers. A significant historical year for this entry is 1911.

Location. 31° 53.231′ N, 100° 17.707′ W. Marker is in Bronte, Texas, in Coke County. Marker is at the intersection of Main Street (State Highway 158) and Railroad Street, on the left when traveling west on Main Street. Marker is in front of the depot. Touch for map. Marker is in this post office area: Bronte TX 76933, United States of America. Touch for directions. 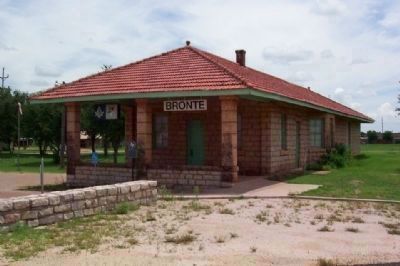 Photographed By William Fischer, Jr., June 27, 2007
2. Bronte Depot and Marker
The building is now used as a war museum. The area surrounding the building now has a flag pole, military displays and a war memorial. 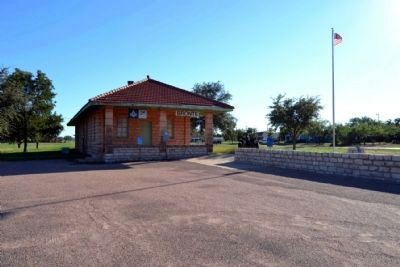 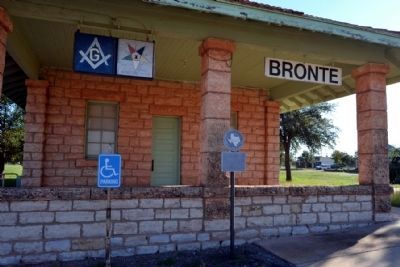