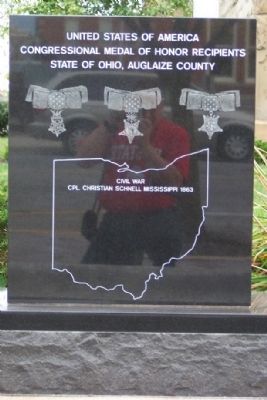 Topics and series. This historical marker is listed in these topic lists: Heroes • War, US Civil. In addition, it is included in the Medal of Honor Recipients series list. A significant historical year for this entry is 1863. 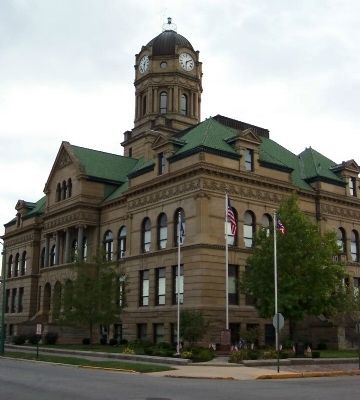 Also see . . .  Grant's Second Assault on Vicksburg. The May 22, 1863 assault on the Vicksburg defenses was better prepared than previous attempts, but was driven back after some initial success. From the Vicksburg National Battlefield Park site. (Submitted on October 13, 2008, by Craig Swain of Leesburg, Virginia.)

Additional commentary.
1. Corporal Christian Schnell
Schnell was a member of the 37th Ohio Volunteer Infantry, at the time serving as part of General Grant's army besieging Vicksburg, Mississippi. On May 22, 1863, Grant ordered a massive assault on the Confederate fortifications around Vicksburg. Schnell led one of many advanced parties sent out in advance of the main force, with orders to clear obstacles. While successful at some points, the assault failed overall, with over 3,000 Federals killed, wounded, or captured. Ninety-seven Medals of Honor were awarded for actions on that day, the highest single day total in the history of the medal. Schnell's medal was awarded in 1894. The citation read, "Gallantry in the charge of the volunteer storming party." Schnell died in 1908.
— Submitted October 13, 2008, by Craig Swain of Leesburg, Virginia.
Credits. This page was last revised on June 16, 2016. It was originally submitted on October 12, 2008, by William Fischer, Jr. of Scranton, Pennsylvania. This page has been viewed 1,974 times since then. Photos:   1, 2. submitted on October 12, 2008, by William Fischer, Jr. of Scranton, Pennsylvania. • Craig Swain was the editor who published this page.
Share this page.