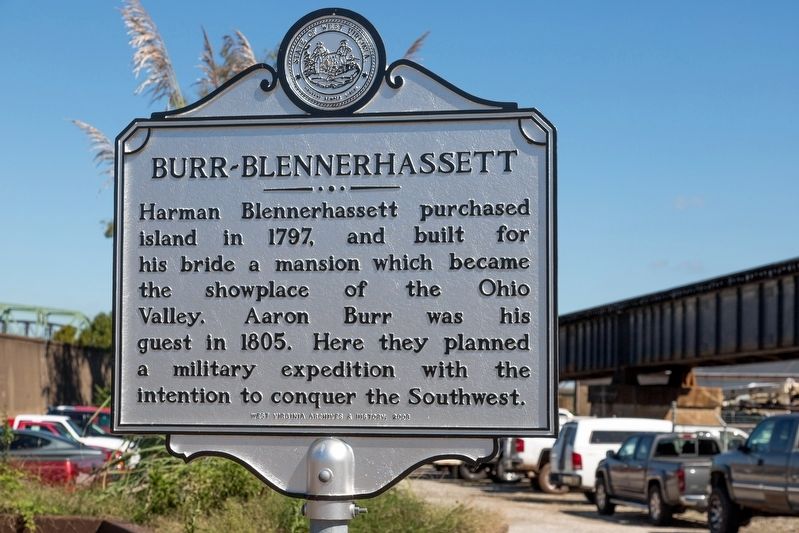 By J. J. Prats, September 28, 2018
1. Burr-Blennerhassett Marker
Inscription.
Burr-Blennerhassett. . Harman Blennerhassett purchased island in 1797, and built for his bride a mansion which became the showplace of the Ohio Valley. Aaron Burr was his guest in 1805. Here they planned a military expedition with the intention to conquer the Southwest. . This historical marker was erected in 2008 by West Virginia Archives and History. It is in Parkersburg in Wood County West Virginia

Harman Blennerhassett purchased island in 1797, and built for his bride a mansion which became the showplace of the Ohio Valley. Aaron Burr was his guest in 1805. Here they planned a military expedition with the intention to conquer the Southwest.

Topics and series. This historical marker is listed in this topic list: Settlements & Settlers. In addition, it is included in the West Virginia Archives and History series list. A significant historical year for this entry is 1797. 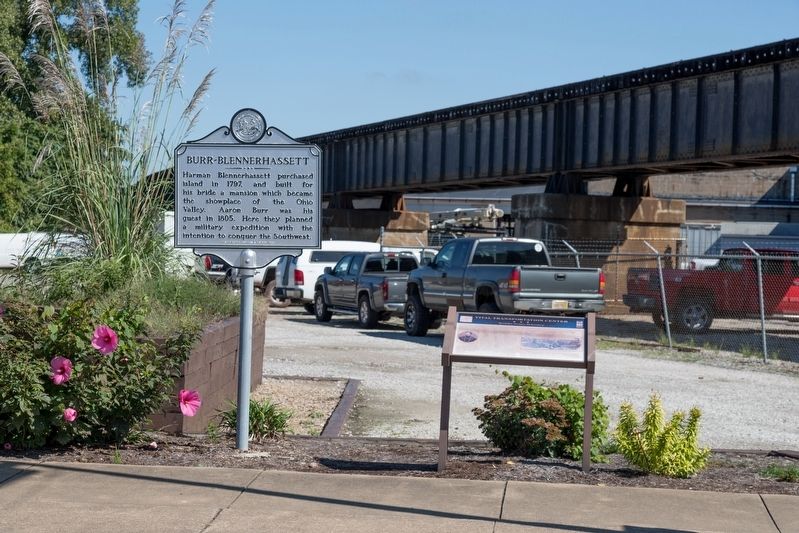 More about this marker. This marker is not on Blennerhassett Island. The island is more than a mile away to the west and can be reached via hourly steamer (11 AM to 4 PM) Tuesday to Sunday from the dock at 137 Juliana Street nearby.

Regarding Burr-Blennerhassett. Harman Blennerhassett was the codefendant in Aaron Burr’s treason conspiracy trial.

Also see . . .
1. The Tragedy of Harmon Blennerhassett. Article by Thomas Jewett. “The island mansion was built with taste and beauty. No expense was spared in its construction that could add to its usefulness or splendor. It consisted of a main building, fifty-two feet in length, thirty in width, and two stories high. Porticos, forty feet in length, in the form of wings, projected in front, connected with offices, presenting each a face of twenty-six feet, and twenty feet in depth, uniting them with the main building, forming the half of an ellipse, and making in the whole a front of one hundred and four feet. The lefthand office was occupied for the servant's hall, and the right for the library, philosophical apparatus and study. A handsome 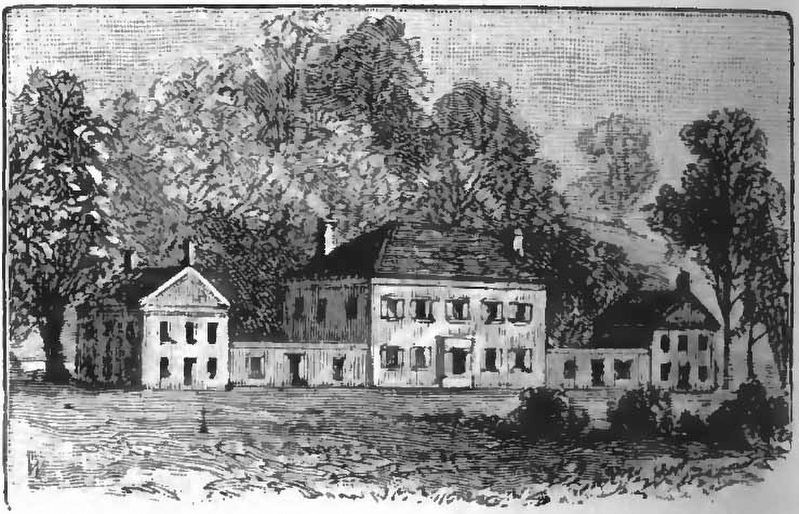 From Appleton's Cyclopædia of American Biography via Wikipedia Commons, 1861
3. Drawing of the dwelling Harman Blennerhasset erected on an island in the Ohio River.
lawn of several acres occupied the front ground, while an extended opening was made through the forest trees on the head of the island, affording a view of the river for several miles above, and bringing the mansion into the notice of descending boats. Nicely graveled walks, with a carriage way, led from the house to the pillars. A fine hedge of native hawthorn bordered the right side of the avenue to the house, while back of it lay the flower-garden, of about two acres, enclosed with neat palings, to which were trained gooseberry bushes, peaches and other varieties of fruitbearing trees, in the manner of wall fruits.” —Dr. S.P. Hildreth (Submitted on October 4, 2018.)

2. Wikipedia Entry for Harman Blennerhassett. “As the result of the President Thomas Jefferson's call for the arrest of Burr, Blennerhassett, and their ca. 70 followers, the mansion and island were occupied and plundered in December 1806 by local Virginia militia. Blennerhassett fled, was twice arrested, and finally imprisoned in the Virginia state penitentiary. He was only released following Burr’s acquittal at the end of a long 1807 treason trial at Richmond, Virginia. The Blennerhassetts never returned to their island home, which in 1811 was destroyed by fire.” (Submitted on October 4, 2018.) 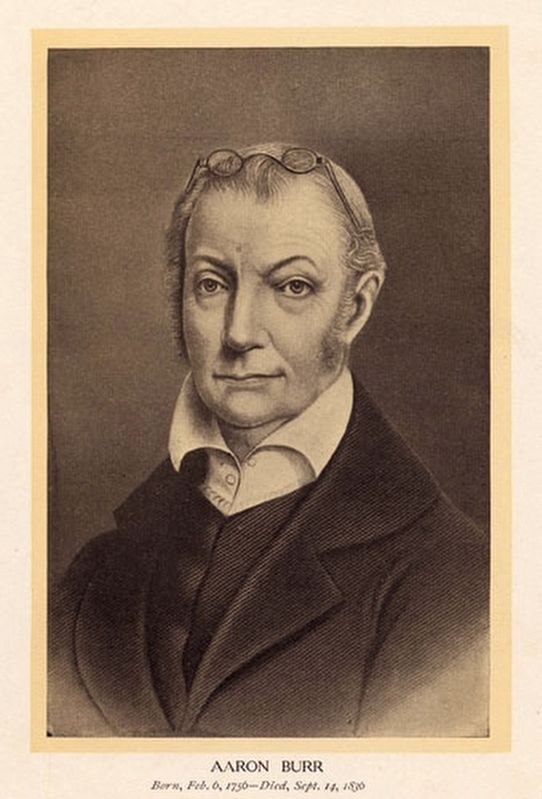 University of Chicago Collections, via Wikipedia Commons, circa 1800
4. Aaron Burr (1756-1837)
Vice President of the United States 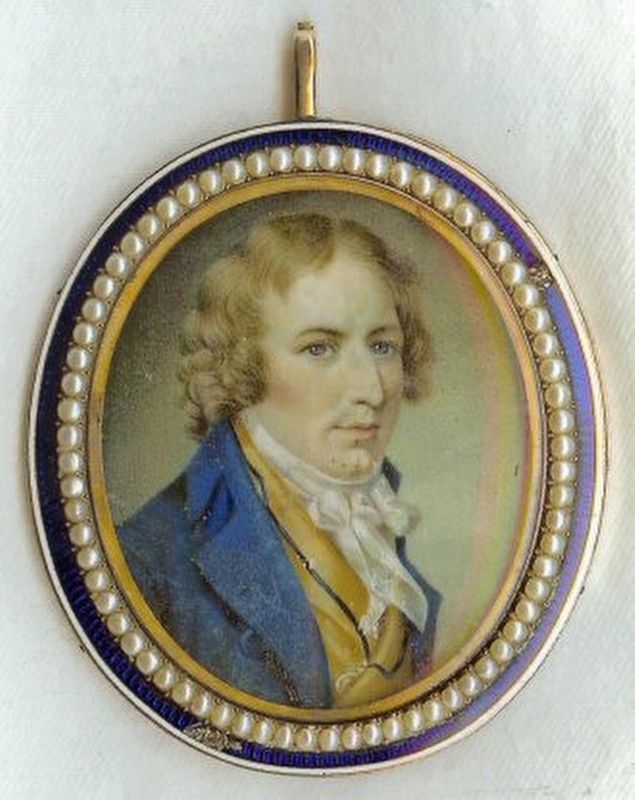