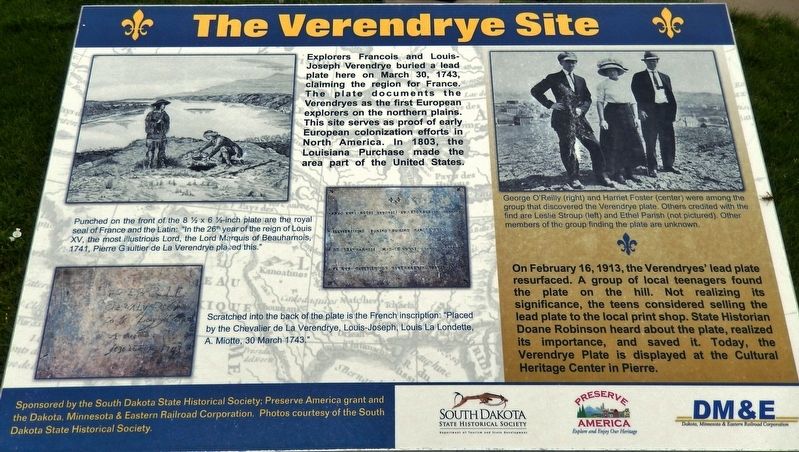 Explorers Francois and Louis-Joseph Verendrye buried a lead plate here on March 30, 1743, claiming the region for France. The plate documents the Verendryes as the first European explorers on the northern plains. This site serves as proof of early European colonization efforts in North America. In 1803, the Louisiana Purchase made the area part of the United States.

On February 16, 1913, the Verendryes' lead plate resurfaced. A group of local teenagers found the plate on the hill. Not realizing its significance, the teens considered selling the lead plate to the local print shop. State Historian Doane Robinson heard about the plate, realized its importance, and saved it. Today, the Verendrye Plate is displayed at the Cultural Heritage Center in Pierre.

Erected by The South Dakota State Historical Society; a Preserve America grant and the Dakota, Minnesota 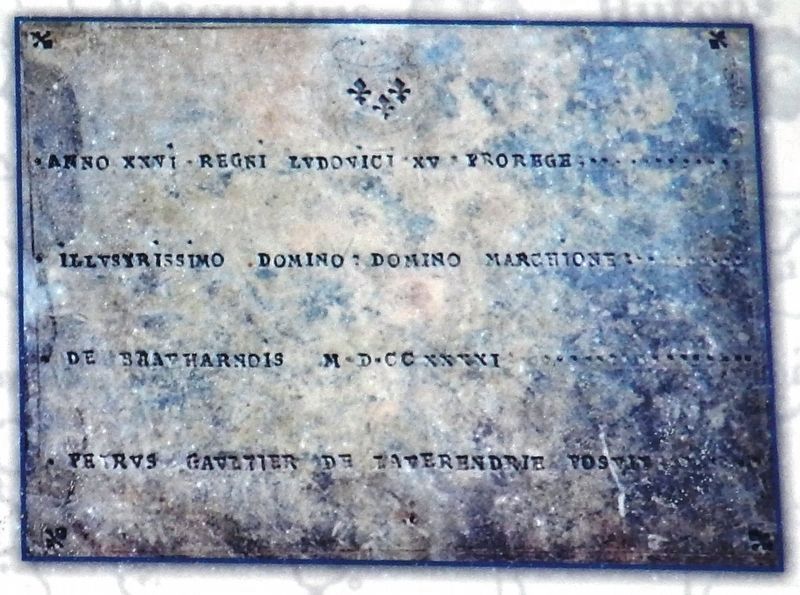 2. Marker detail: Verendrye Plate (front side)
Punched on the front of the 8 1/2 x 6 1/2-inch plate are the royal seal of France and the Latin: “In the 26th year of the reign of Louis XV, the most illustrious Lord, the Lord Marquis of Beauharnois, 1741, Pierre Gaultier de La Verendrye placed this.”

Click or scan to see
this page online
and Eastern Railroad Corporation.

Topics. This historical marker is listed in these topic lists: Colonial Era • Exploration. A significant historical date for this entry is March 30, 1743.

More about this marker. Marker is a large composite plaque, mounted horizontally, on waist-high posts.

Related markers. Click here for a list of markers that are related to this marker. The Verendrye National Historic Site 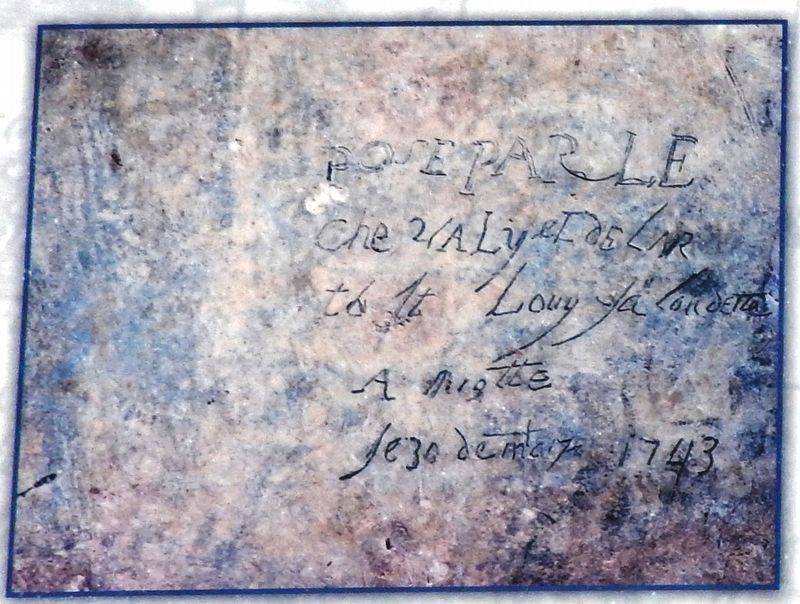 3. Marker detail: Verendrye Plate (back side)
Scratched into the back of the plate is the French inscription: “Placed by the Chevalier de La Verendrye, Louis-Joseph, Louis La Londette, A. Miotte, 30 March 1743.”
1. South Dakota History: The Verendrye Plate. Two of La Verendrye’s sons buried a lead plate claiming control of the entire Missouri River Drainage for France. The plate was dated March 30, 1743. It was discovered by children on February 16, 1913, and is now on display at the Cultural Heritage Center in Pierre. A replica of the plate can also be seen at the Verendrye Museum in Fort Pierre. (Submitted on October 13, 2018, by Cosmos Mariner of Cape Canaveral, Florida.)

2. Verendrye Plate. On a warm winter day, 109 years after Lewis & Clark’s visit to this vantage point, young children played on the same hill. Stones brought in by the glaciers were scarce on the west side of the river, so when found they were carried away by the early pioneers for useful purposes. Hattie Foster, Ethel Parish, and George O’Reilly were among those on the hill that day, February 16, 1913. Hattie noticed something resembling a piece of metal sticking out of the soil. With her friend’s assistance, she dug out an unusual object... (Submitted on October 13, 2018, by Cosmos Mariner of Cape Canaveral, Florida.)

3. Discovering The Verendrye Plate. Ethel Parish and two friends found the plate while playing on a sunny February day on a hill over Fort Pierre. Their discovery caused historians to rethink their accounts of white man’s arrival 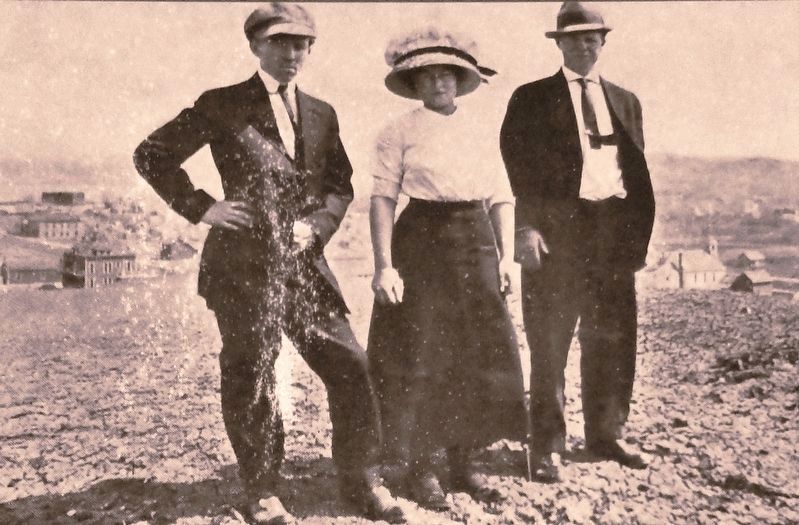 4. Marker detail: George O'Reilly, Harriet Foster and Leslie Stroup
George O'Reilly (right) and Harriet Foster (center) were among the group that discovered the Verendrye plate. Others credited with the find are Leslie Stroup (left) and Ethel Parish (not pictured). Other members of the group finding the plate are unknown.
in this region. The plate captured the imaginations of South Dakotans then, and it has remained one of the state’s most treasured museum pieces ever since. Ethel never saw friends George and Hattie after she left Fort Pierre as a 14-year-old. When the South Dakota State Legislature appropriated $700 to purchase the Verendrye plate from the finders, no one knew where she’d gone. The money was awarded to the others — George received $500, Hattie just $200. Ethel also lost credit for the find. Although townspeople knew there was a third teenager on the hill, the name was not always remembered accurately and other Fort Pierre youngsters occasionally were listed with George and Hattie. (Submitted on October 13, 2018, by Cosmos Mariner of Cape Canaveral, Florida.) 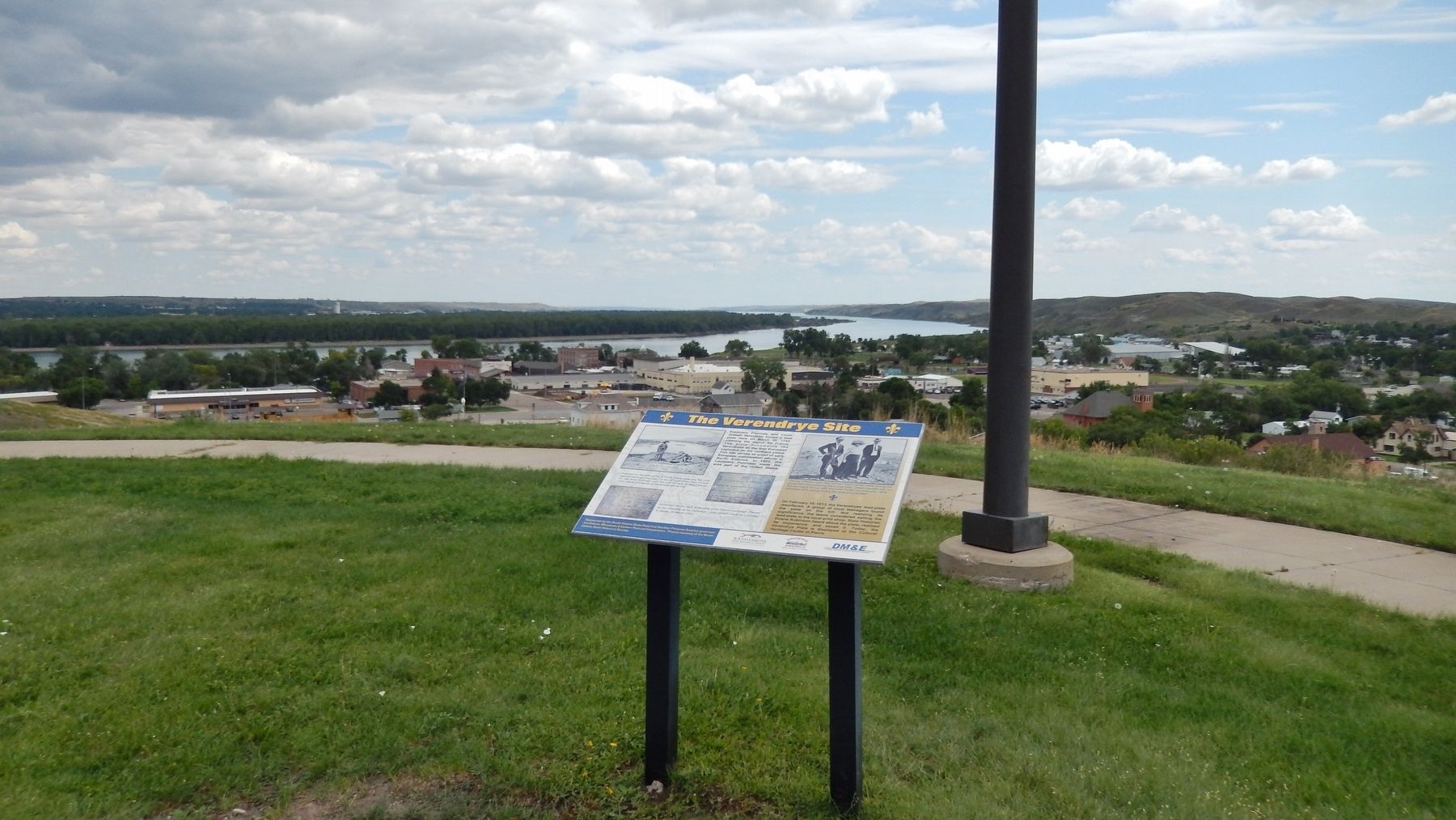