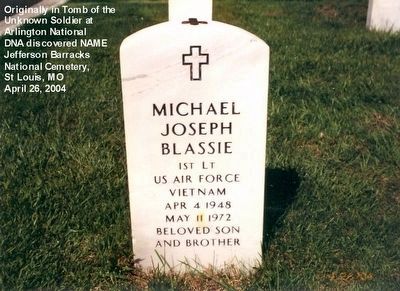 Back , Silver Star, Distinguished Flying Cross, Purple Heart, Air Medal and 4 OLC. Killed in Action-Unknown Soldier May 28, 1984 May 14, 1998 . This memorial was erected by Department of Veterans Affairs. It is Near Lemay in St. Louis County Missouri

Erected by Department of Veterans Affairs.

Topics and series. This memorial is listed in this topic list: War, Vietnam. In addition, it is included in the National Cemeteries series list. 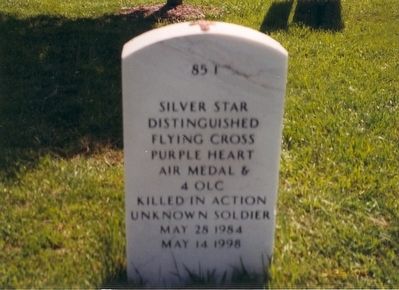 More about this marker. His body was originally in the Tomb of the Unknown Soldier-Vietnam at Arlington National Cemetery. Through DNA it was discovered who the Unknown Vietnam Soldier was. His family requested that he be buried in Jefferson Barracks National Cemetery, St. Louis MO. He is in Section 85, Grave 1.