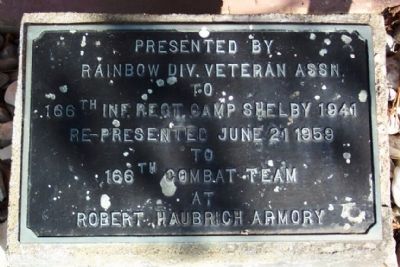 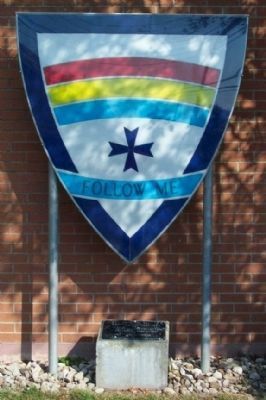 The 166th Infantry Regiment was formed during World War I, with cadres drawn from the 37th Division, and served as part of the illustrious 42nd (Rainbow) Division throughout the war. The nickname of the 42nd Infantry Division, the "Rainbow Division," reflects the composition of the division during World War I. The division was drawn from the National Guards of 26 states and the District of Columbia. It represented a cross section of the American people, as the rainbow represents a cross section of colors.

After World War I, this regiment became one of the four infantry regiments of the 37th Division and went to Camp Shelby (Mississippi) with the Division in October 1940.

In December 1941 the 1st Battalion, 166th Infantry, was separated from 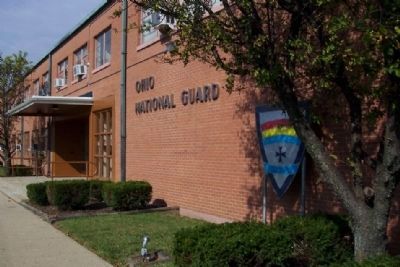 Photographed By William Fischer, Jr., October 14, 2008
3. Robert Haubrich Armory and Marker
the Division, and on February 12, 1942, sailed from New Orleans as part of Task Force 1291. This force was charged with the defense of the islands of Aruba and Curacao in the Caribbean Sea. This battalion operated in this theater until September 1, 1943, when, without personnel or equipment, it was returned to the 166th Infantry Regiment, and a new 1st Battalion was formed with a cadre of soldiers returned from overseas duty.

On August 20, 1943, the 166th Infantry Regiment was authorized recognition as a complete regiment, the 1st Battalion being re-formed at Camp Shelby and the Cannon Company added.